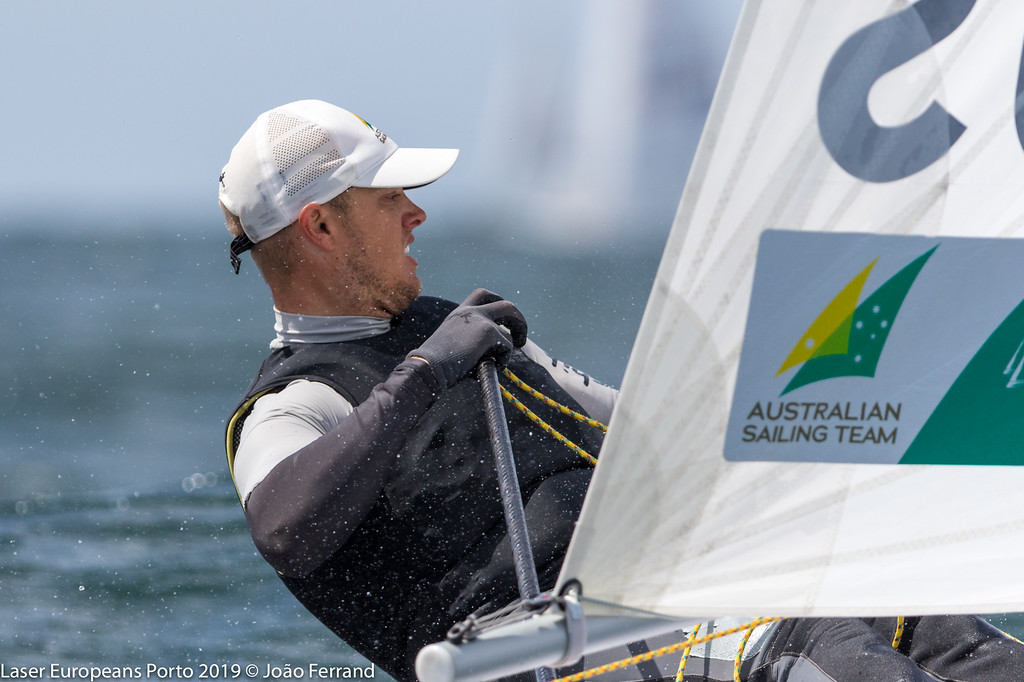 One day of racing remains at the 2019 Laser European Championship in Portugal, and a trio of Australians are inside the top ten, as Tom Burton continues leading the Laser, where Matt Wearn is third, while Mara Stransky is sixth in the Laser Radial.

“Not as good today,” Tom Burton said of his fifth and 18th places on Day 5, the latter result used as a second drop. “I struggled to get ahead from the starts and needed to chip away the whole day.

“Unfortunately, I got into a rule situation in the second race and need to do some penalty turns, which led to a big comeback,” the Australian Sailing Squad member said.

“We have two more races left, so I’ll need some good results tomorrow with the poor second race today,” said Burton aware he cannot be cannot take his eye off the ball, as Britain’s Lorenzo Chiavarini is breathing down his neck nine points away. Australian team mate, Matt Wearn is another threat, only 14 points off the lead.

Wearn had a brilliant day with a third and a win, closing the points gap between him and the top two. This occurred after officials decided on an early race start due to forecast stronger winds.

“It meant a reasonably quick day on the water, which is nice,” Wearn remarked. I enjoyed the opportunity to stretch the legs a little more and scored good results. Points are still looking very tight with the final two races tomorrow, so I will be looking to finish strongly,” he said.

In the Laser Radial, Mara Stransky has leveraged herself up into sixth place overall; above her are the reigning gold and silver Olympic medallists in the class, along with the reigning world champion.

Despite her excellent place, his, Stransky said: “I couldn’t really do what I wanted (Race 9 where she finished 19th), but I did salvage the score a little with a decent comeback (10th in Race 10).

“The second one was cleaner, and I was stoked to test my speed against the best, in conditions we haven’t raced much in.

“I don’t have any expectations going into the final day, but the conditions are looking great fun, quite similar to today. They have forecast 15-20 knot northerlies with a big swell, so I’m looking forward to it,” the Queensland athlete said.

Other Australian Laser results have Luke Elliott in 11th, Mitch Kennedy 15th and Finn Alexander 23rd, the trio unable to fight their way out of double digit results on Day 5.

In the Laser Radial, Elyse Ainsworth is 40th in the Gold fleet, while Zoe Thomson is 62nd in the Sliver Fleet.

The Laser European Championships conclude in Porto, Portugal tomorrow. Olympic aspirants from around the world are taking part.