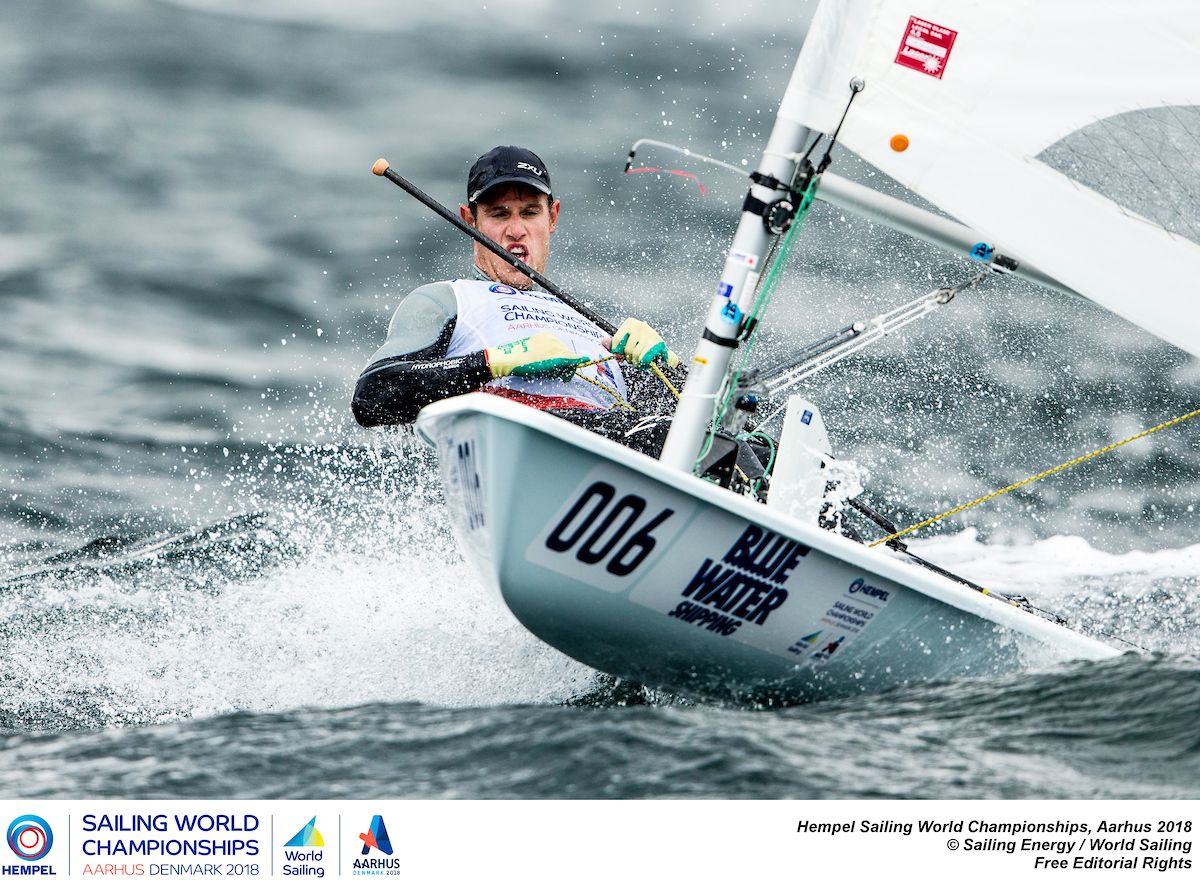 The light winds and tricky consitions have not suited the Aussies. Rio silver medallists Mat Belcher and Will Ryan are the next best-placed crew, holding fourth in the 470 while Will Phillips and Iain Jensen are fifth in the 49er. The other Australian crews currently in the top 10 are Rio silver medallists Jason Waterhouse and Lisa Darmanin who are sixth in the Nacra 17 (with Nathan and Haylee Outteridge currently 11th) and Tash Bryant and Annie Wilmot who hold 10th place in the 49er FX.

Zoe Thompson is the best-placed Australian in the Laser radial in 32nd, Jake Lilley lies in 23rd place in the Finn (with Tom Slingsby in 37th) and Nia Jerwood and Monique de Vries are 25th in the Women's 470.

Men’s RS:X windsurfing
Some of the usual suspects dominated day one of the men’s RS:X with France’s Louis Giard continuing his dominant 2018 form to top the leaderboard. But two more familiar Flying Dutchmen are breathing down his neck. Kiran Badloe won his last race to take the yellow bib from his friend and the king he would depose – double Olympic champion, Dorian van Rijsselberghe. The surprise was Italy’s Daniele Benedetti in second after just two months training following eight months out with a knee injury. And China’s class world champion, Bing Ye, was lying 73rd overall after finishing 34th, 34th and 33rd. A Chinese men’s team that had been so dominant in Enoshima, Japan was dispersed on the winds.

Men’s Kiteboarding
A momentous World Championship debut saw France’s Nicolas Parlier underlined exactly why he is the red-hot favourite by winning all six of his races. His compatriot, Theo de Ramecourt was almost as dominant in the second fleet.

Women’s Kiteboarding
Likewise, USA’s Daniel Moroz showed why she is the red-hot favourite in the women’s kite by winning the last two of her three races. She will have been furious to finish second in her first one.

Nacra 17
Italy’s Ruggero Tita and Caterina Marianna Banti underlined the pre-boat park consensus that “there are the Italians and everybody else” by winning all three of their races in choppy conditions that were too hot for handle for many in the fleet.

49er
Yesterday, it was one New Zealand crew ahead of two French ones, it is now the reverse. Two third places took France’s Lucas Rual and Emile Amorol top of the leaderboard, ahead of the two New Zealand crews in this huge 86-boat class with three fleets. But two powerful crews have moved ominously onto their shoulders, Croatia’s Sime Fantela (Rio 2016 Olympic champion in the 470) and his brother, Mihovil Fantela, and Australia’s William Phillips and Iain “Goobs” Jensen (Olympic gold medallist in 2012 and silver medallist in 2016 with Nathan Outteridge) who is standing in for Phillips’s injured brother Sam.

49er FX
Local favourites Ida Marie Baad Nielsen and Marie Thusgaard Olsen, who have grown up racing in the Bay of Aarhus and cheered the return of the westerlies as other quivered, moved to the top of the leaderboard with a solid third and fourth. Great Britain’s Charlotte Dobson and Saskia Tidey had a second place and a win to move into second overall with the Olympic and Volvo legends all hovering on their shoulders.

Laser
Despite a thirteenth and fourth place, New Zealander Sam Meech (bronze in the Rio 2016 medallist), stays top but the field of Olympic and world champions is now bunched much more closely behind him.

Laser Radial
Two second places from Anne-Marie Rindom saw Denmark claim another top spot. The surprise is that Netherland’s Olympic champion, Marit Bouwmeester is still back in ninth after a 16th place in her first race of the day.

Finn, Men’s 470s, Women’s 470 were on a lay-day and will recommence in gold and silver fleets tomorrow.