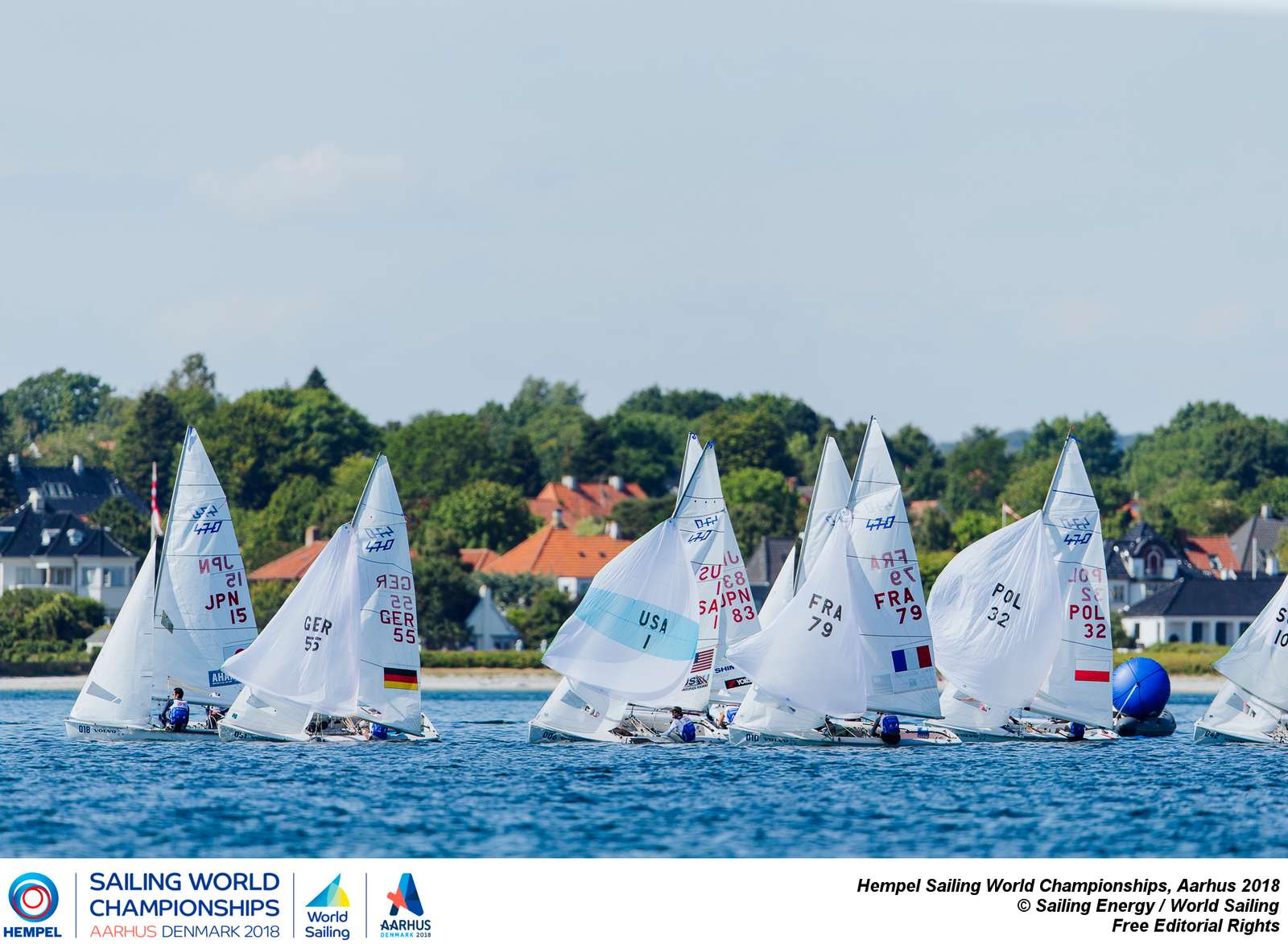 The 49erFX fleet had its first day of competition on Saturday in the Hempel Sailing World Championships Aarhus 2018 on the Stadium Course and the three circumnavigators were back in crews of two on their Olympic class 15ft (4.9 metre) skiffs.

In a return, the prevailing Aarhus offshore westerlies were testing, but the roar from the promenade as Denmark’s home favourites Hansen and Katja Salskov-Iverson returned after winning two of their three races to top the leaderboard told the story.

“We just went really close to the stadium out here on the pier and it was amazing, “Hansen said. “Everyone was cheering and waving and it’s obviously incredible being home. It’s not like anything we’ve seen before.”

The fleet of 60 boats was split into two and before Hansen, Grael and Echegoyen Dominguez were slightly slower to re-find their feet, and the Spaniards had a spectacular capsize in race two as they crossed with Grael at the front of the field. They did well to finish 23rd out of 30.

It was no surprise to see Grael, the Rio 2016 Olympic champion, and gold medallist at the 2014 Santander World Championships, win the last of her three races with the Spanish chasing them home in second. Form is temporary, class permanent.

“I came straight here from Holland, and for me, the first week was a lot of adapting, especially physically,” Grael said.

“I was feeling very far behind on fitness. Although you’d think I would come back stronger from the Volvo I didn’t. So, it was a whole month catching up and then the sailing of course was horrible, we had coach regatta and we were almost last. It was really terrible.

“I feel a lot of camaraderie with them (Volvo trio). For all of us it’s definitely a new experience to be coming back and not being at our best.”

Grael had 20 days of training, Hansen 13 and Echegoyen Dominguez just 10. But they were united by camaraderie rather than a lack of practice.

Those sentiments were echoed by Echegoyen Dominguez. “The Volvo Ocean Race is a little bit different and it’s so hard on most of the crews and it makes you all a little family,” she said.

“In this case, the three of us already had a strong friendship before the start of this race but I think that now it’s a bit better than before.”

Although some things never change: “But we are the same because we’re always fighting against Martine,” Echegoyen Dominguez added with a smile that hinted at the battles to come.

Of course, nobody had told the Dutch not to crash the Volvo party – after all they did host the finish in The Hague at the end of June. Odile van Aanholt, 20, and Marieke Jongens, 30, only combined in February but they looked like old hands yesterday finishing with the best results of the day: second, first and fourth.

“Yesterday, I said, wow, we’ve got almost the toughest fleet of everyone, because we’ve got a lot of good people,” Jongens said. “But we just focused on ourselves.”

You could feel the anxiety in the boat park before the racing started. The wind kept on shifting above the rigs, going from five knots suddenly up to 15. There was less cloud cover than forecast and the cumulus clouds drifted out over the race course, losing their heat source of the land and dumping wind onto random parts of the course.

Even Grael said she was anxious as she prepared to launch and when Grael says she is nervous then it is serious. For the Danish sailors (and residents) the westerlies were a soothing and familiar balm after months of unusually tropical high-pressure conditions.

49er
Winning their final race meant New Zealand’s Logan Dunning Beck and Oscar Gunn moved to the top of the leaderboard ahead of the two French crews.

Laser
Another New Zealander in even more irresistible form was Sam Meech, who followed two wins on the first day, with a first and second on Saturday – what happened in the second Sam? (Actually, he came back from 13th). Rio 2016 Olympic champion, Tom Burton is in third after winning his second race.

Laser Radial
USA’s flagbearer, Paige Railey, stayed top of the leaderboard despite a more difficult day in which even Marit Bouwmeester (Netherlands) could not find a way, finishing 28th in her second race. New Zealand’s Olivia Christie finished 51st in her first race and 3rd in her second.

Finn
The Finn got even tighter on the third day of competition as they split into gold and silver fleets. There is now a three-way split at the top between Nicholas Heiner (Netherlands), Ed Wright (Great Britain) and Max Salminen (Sweden). The Finn gold fleet will have 45 teams.

The Men’s 470 fleet will now split and the gold fleet will have 32 teams.

Women’s 470
Ai Kondo Yoshida and Miho Yoshioka continue to deliver on their form in 2018 and underline Japan’s strength in the 470. There are 13 Japanese teams across the men’s and women’s 470. Hannah Mills, the Olympic champion in Rio and new crew Eilidh McIntyre, stay just behind second.

The Women’s 470 fleet of 47 boats will remain as a single fleet as it did not split for qualification.

What the sailors said:

Sam Meech – New Zealand – Laser (leader)
“A little bit of luck today. There were some pretty scary moments because it was really, really tricky sailing out there. There were 90-degree wind shifts at times so I was just in the right place at the right time.

:It’s been an awesome start. I am loving the racing out there.
“Obviously there’s a lot of racing to go and we’ve got some racing on some pretty tricky courses coming up. It always helps [to have a good start] but it’s only the qualifying so far. The real action happens in those last two days of Gold fleet.

“Target on my back? Yeah, I think sometimes people go the same way as you, which makes it pretty hard, but I’m not always going the right way, so I think it’s going to a mistake if people do that.”

David Gilmour – Australia – 49er
“We had three tough races. Everyone knew these offshore breezes are challenging.
The last couple of weeks we’ve just had sea breeze, so it was different to the conditions we were training in for the last two weeks.

“During the first race we were in the lead, approaching the top mark and Joel fell overboard. He was adjusting the trapeze and let go of it; the hook dropped out and he slipped in. We lost about 50 metres from the whole incident. The 49er fleets are packed so it’s hard to call any rivals at this stage. The points are so close, we are just focused on not making any mistakes.”

Benjamin Bildstein – Austria – 49er
“Our first race was amazing, we managed a bullet. We’ve been struggling with preparations before today, and we didn’t have much training, compared to most.

These westerly winds are always tricky, especially if the air is much closer to the shore and the forest just above. Tonight we will party, go to this live music festival and grab some food.”

Josh Porebski – New Zealand – 49er
“You can’t win the regatta yet, but you can lose it if you get two bad races to start with. The first two races, we sailed well and managed to keep us in a good spot, we are happy with that. The last one, we thought one thing was happening, but we were both wrong and got caught with our pants down.”