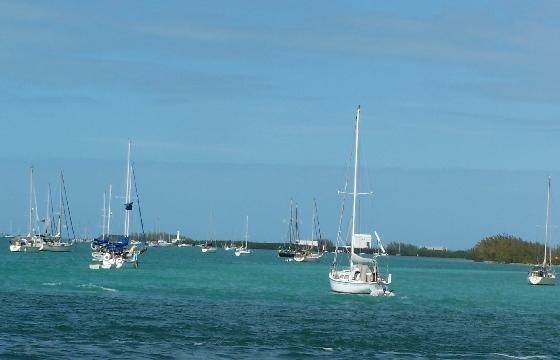 Boats anchored on the west side of Fleming Key. Photo virtualtourist.com.

According to a report by William Axford of the website keysnet.com, there was an argument between yachties when a sailboat drifted off its anchor near Fleming Key (Florida) in the middle of the night. The report states:

Friday, a 35-foot sailboat became unanchored off Fleming Key just outside of Key West, crashing into another sailboat around 1 a.m. The owners of the sailboats threatened each other after the crash, prompting intervention from Coast Guard officials.

“The Fleming Key anchorage is kind of notorious. A lot of vessels aren't anchored well and when we have strong enough weather, they tend to drift into each other,” Belmont said. “There were idle threats but the situation diffused once we were on scene.”

Although there were no injuries reported in either incident, Belmont said people should always exercise caution when out on the water. Adjusting trips to the weather and not overloading vessels with people are two things that should be taken into account before heading into open water.