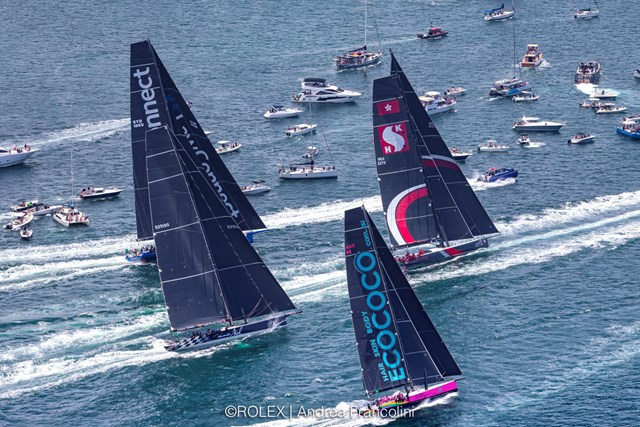 The crew on the Botin 80, Stefan Racing, have kept the 100-footers in their sights since the start cannon fired for the Cruising Yacht Club of Australia’s 628 nautical mile Rolex Sydney Hobart Yacht Race.

The Queensland boat is skippered by Grant Wharington, who owned the line honours victor in 2003, Skandia. He and the crew are doing all they can to hang onto the tails of his larger rivals, and in fact, have a crack at beating at least one over the Castray Esplanade finish line in Hobart.

At the Sydney Harbour start, the bright pink boat, named for famous hairdresser of the seventies, Stefan Ackerie, diced with the ‘100s’. She was in front of Black Jack and LawConnect; SHK Scallywag 100 the only barrier between her and Sydney Heads until they were off Watsons Bay when she was reeled in, but there was nothing in it.

“How did the pink boat look on the Harbour?” asked one of her four owners, Paul Heyes. You could hear the smile in his voice.

Stefan Racing has not let up since. And nor do her crew intend to, states Heyes emphatically. The Victorian is a skilled sports boat and big boat sailor. He is relishing everything that has been thrown at them so far.

“We got 29 knots of boat speed at one point, under full main, J6 and a fractional Code Zero. We flew,” said Heyes, who was steering at the time. “The seas were huge and it was violent.

“The young guys have been working well and learning a lot,” he said, referring to the three sons of Wharington, Doug Sallis and Heyes himself. In fact, Heyes’ son, Zac, is the youngest sailor in the fleet this year. Zac turned 18 in August and has only one other contemporary left in the race, Saul Davidson on Wild Oats, which has been featuring in the overall standings.

Like Zac, Wharington’s son, 25-year-old son Oli, and 26-year-old Jarrod Sallis, son of co-owner Doug, are privileged to sail their first Hobart on such a yacht with some of Australia’s most experienced yachtsmen. The former Beau Geste finished fifth over the line in the 2017 race and inside the 2016 race record, so anything is possible.

Heyes reiterated what others have reported from the race track: “It was really hard weather last night. Heinous. The rain in the face really hurt. It was 33 knots across the deck. We were doing 12 knots and sailing with a storm sail and two reefs in the main.

“It couldn’t be more different today. A bright blue sky, not a cloud and we’re sailing with a masthead Zero, the ‘Moh’, J6 and full main doing 12 knots boat speed.”

Stefan Racing was just shy of 60 nautical miles from Tasman Island at 4.50pm today, sailing on moderate, flat seas. “In a northerly,” the yachtsman said.

“We’re waiting for the breeze to fill in and clock east around 6.30pm. There’s been lots of transitions, in front of us. The 100s got through the transition and got a few miles on us, but we’re reeling them in now,” he said.