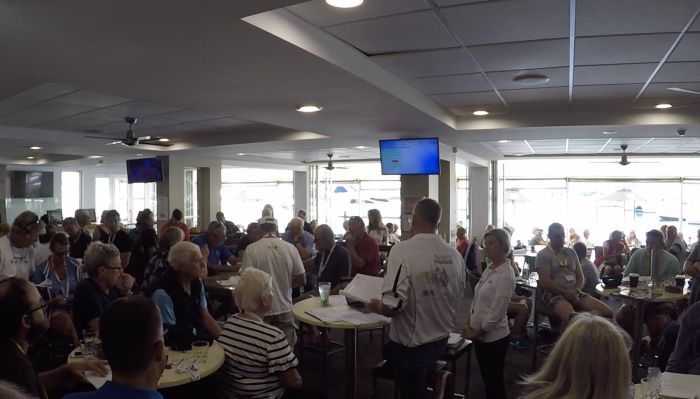 Down Under Rally participants at one of the information sessions at Southport Yacht Club.

Thirty yachts with over 100 crewmembers will depart the Southport Seaway at 08:00 on Friday the 17th May bound for New Caledonia and Vanuatu as part of the Down Under Go East Rally.

The vessels and their crews have travelled from all over the country and New Zealand to the Gold Coast where they have been busily preparing their vessels for the voyage.

The vessels are participants in the Down Under Go East yacht rally which has been organised by Gold Coast locals John and Leanne Hembrow who will also be sailing on the rally aboard their 15m Catamaran Songlines.

This will be the fourth year that the rally has taken place.

The Southport Yacht Club has hosted the rally participants for the past three weeks and has provided the rally organisers with access to all the facilities the club has to offer including marina berths, and use of the clubs amenities as well as the use of the various function rooms that have been used for a variety of rally related events over the past weeks. The club restaurant and bar has also provided an area where participants have been able to socialise and enjoy meals in a relaxed and friendly environment.

Director of the Down Under Rally, John Hembrow, commented that the Gold Coast is the ideal location for the rally to depart thanks to the availability of marine-related trades and services such as those on offer at The Boat Works at Coomera. The availability of these services is essential for the preparation of the vessels for the voyage.

It is estimated that the rally participants have cumulatively spent in excess of $500,000 over the past few weeks on vessel maintenance and upgrades, provisions for the voyage, dining out and purchases of equipment and a few toys such as stand up paddle boards, kayaks and kite boarding equipment, which is a welcome boost to the local economy.

The voyage from Southport to New Caledonia will take between 5-7 days. The majority of the vessels participating the rally will spend the next five months sailing and exploring New Caledonia and Vanuatu before returning to Australia in mid to late October.

Those who are interested can track the progress of the fleet as they sail to New Caledonia using the following link: