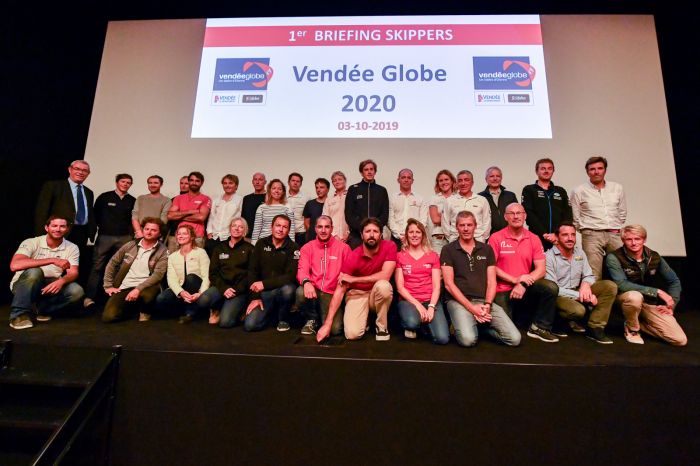 Thirty-seven: this is the number of candidates who declared themselves officially and it is already a first record. Old-timers, podium candidates, rookies, foreigners, more women than ever and still as many adventurers, the 2020 vintage is likely to be outstanding. Here are the main features of the Vendée Globe 2020 projects.

Here are the main features of the Vendée Globe 2020 projects.

There should have been only eight, but a last-minute guest has just been added to the list of candidates in the person of Yann Eliès. For his third Vendée Globe Yann should also have a new boat, but he has not yet revealed who his partner will be and the architect chosen to design his new machine.

Yann Eliès, Jérémie Beyou (Charal), Sébastien Simon (Arkéa – Paprec), Charlie Dalin (Apivia), Alex Thomson (Hugo Boss), Thomas Ruyant (Advens for Cybersecurity), Kojiro Shiraishi (DMG Mori), Armel Tripon (L'Occitane) and Nicolas Troussel (Corum L’Epargne): that is the list of sailors who will have a new boat designed according to the new IMOCA measurement rules. The foils have now become essential and these new units are built around this new fatal weapon. The first speed tests have shown that the newborns of the IMOCA class could reach speeds of nearly 35 knots.

In contrast with previous editions where, often, an architectural firm dominated, the Vendée Globe 2020 will see the designs of four architectural firms compete: VPLP (Charal / Hugo Boss / DMG Mori) and Guillaume Verdier (Apivia / Advens for Cybersecurity) who had previously worked hand in hand, decided to go their own way, Argentian architect Juan Kouyoumdjian (Arkéa Paprec / Corum L’Epargne) is back with two boats while Armel Tripon (L'Occitane) decided to call on Samuel Manuard, author of promising designs in both Class40 and Mini. The monotype that prevailed during the last editions has given way to very diverse architectural choices that promise a real suspense.

Nineteen foilers at the start

In addition to the nine boats built for the Vendée Globe 2020, ten other competitors will be equipped with the famous foils. To the 2016 generation boats, Newrest – Art et Fenêtres (Fabrice Amédéo), Maître CoQ (Yannick Bestaven), Bureau Vallée 2 (Louis Burton), Prysmian Group (Giancarlo Pedote), Malizia (Boris Herrmann), must be added some units which have undergone a complete overhaul and could play on an even field thanks to their low weight – PRB (Kevin Escoffier), Initiatives Coeur (Sam Davies) or even MACSF (Isabelle Joschke). Other competitors have also added foils, La Mie Câline Artipole Artisans (Arnaud Boissières), La Fabrique (Alan Roura).

The rest of the fleet will consist of classic IMOCAs. Within this contingent, some particularly powerful units can do well, such as Banque Populaire X (Clarisse Crémer), winner of the Vendée Globe 2012, Groupe Apicil (Damien Seguin) or the monohull Finistère Mer Vent (Jean Le Cam). Maxime Sorel (Mayenne V & B), Manu Cousin (Setin Group), Stéphane Le Diraison (Time for Oceans) or Romain Attanasio (Pure) can also hope to join the fight.

For the others, the Vendée Globe has mostly the scent of adventure: finishing a non-stop-round-the-world without assistance is not trivial. Sébastien Destremau (Face Ocean) who arrived 124 days after the start or even Conrad Colmanwho managed to reach the finish line despite dismasting off Portugal both really know what it means. Many skippers are sending out a strong message through their candidacy, and Erik Nigon (Towards a World Without Aids) is one of the most earnest of them. Whether sailing in Class40, Multi50 or IMOCA now, it is the same cause that drives it with remarkable consistency.

Women back on the Vendée Globe

Never will have women been so well represented at the start of the Vendée Globe. They are six to apply with, Sam Davies who is counting on her crewed round-the-world and acquired experience to mingle with the frontrunners for the podium. Isabelle Joschke should have some arguments at the helm of her Verdier-VPLP plan, completely redesigned under the leadership of Alain Gautier. Pip Hare (Pip Hare Ocean Racing) and Miranda Merron (Campagne de France) will strengthen the British colony, when Alexia Barrier (4myplanet) will blow a little Southern air on the fleet of contenders. Finally, Clarisse Crémer will bring her freshness and eagerness to learn: the girl has talent and may well surprise us again as she had done in 2017 on the Mini-Transat.

Here’s the proof that the Vendée Globe attracts more and more: seventeen sailors want another taste of it, with a special mention to Jean Le Cam and Alex Thomson who will enter here their fifth participation. Two other competitors will start their fourth campaign: Arnaud Boissières and Jérémie Beyou. Finally, Sam Davies, Louis Burton and Yann Eliès will be making their third appearance.

Nine competitors have decided to come back after taking part in the 2016 edition, Alan Roura, Fabrice Amedeo, Stéphane Le Diraison, Romain Attanasio, Sébastien Destremau, Thomas Ruyant, Kojiro Shiraishi, Didac Costa and Conrad Colman. Finally, Yannick Bestaven will try again, leaving behind his 2008 experience which had ended when dismasting in the Bay of Biscay.

Facing them, the team of rookies still has a large majority since they will be twenty to embark on this adventure. Some are sailors from the Figaro circuit who are lucky to have a new boat or an updated foiler ; others want to prove their value even without years of experience: Clément Giraud (Fortil) will be eager to overshadow the accidental fire that struck him before the start of the Transat Jacques Vabre. Benjamin Dutreux (Water Family) will strive to show that you can go after your dreams. Damien Seguin will be keen to prove that his disability is by no means a disadvantage to conduct a great round-the-world. Finally, although the Belgian Denis Van Weynberg, does not intend to join the fight for the podium will revive the scent of adventure indispensable to each edition of the Vendée Globe.

A race that attracts beyond French borders

Once again, the Vendée Globe attracts beyond French borders. More than one third (exactly 35% – 13 candidates) of competitors come from abroad. The record of 2008 is equaled (there were 13 foreigners in 2008). Nevertheless, the record of the nationalities represented is beaten with 11 different nations on this first set (10 nations were represented in 2016). The British are the largest contingent with four candidates (Alex Thomson, Pip Hare, Miranda Merron and Sam Davies) Europe is heavily represented: Belgium (Denis Van Weynberg), Spain (Didac Costa), Italy (Giancarlo Pedote), Switzerland (Alan Roura) and for the first time, a Finnish competitor (Ari Huusela) and Germans (Boris Herrmann and the Franco-German Isabelle Joschke). On the other side of the Globe, Conrad Colman will represent both New Zealand and the United States and the Japanese Kojiro Shiraishi will represent the Far East, completing a picture of great diversity.

Will this 9th edition be the first to see a foreigner win the Everest of the Seas?

This 2020 edition is therefore particularly attractive. An record number of competitors at the start, a wide diversity of profiles, candidates for adventure that will rub shoulders with ultimate racers and already some twists … Looking forward to November 2020!

The definitive line-up for the Vendée Globe will be known after the close of the registrations on July 1st, 2020.