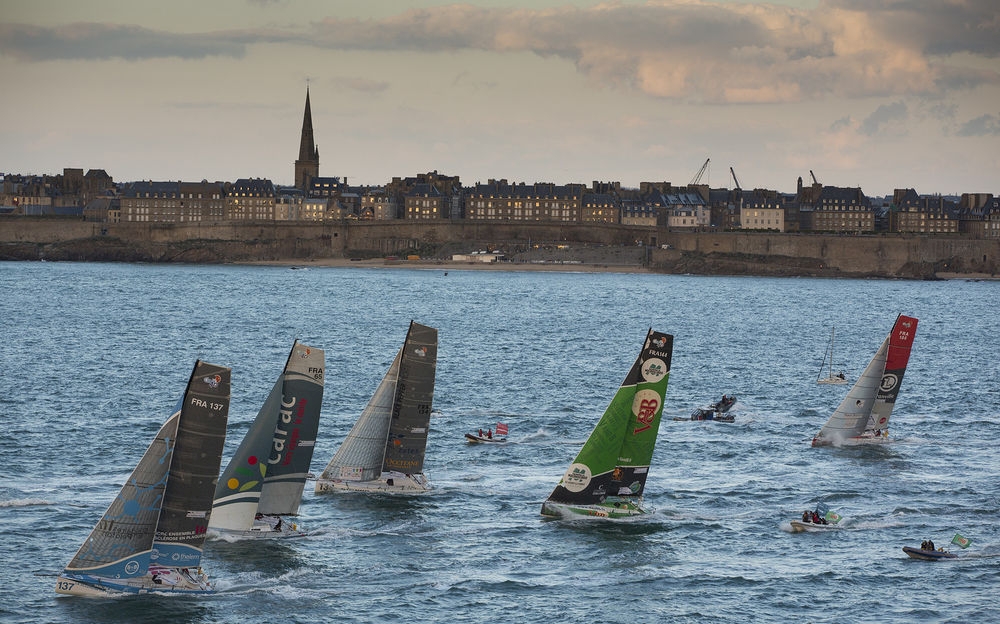 A fleet of 20 racing yachts and their skippers, plus guest crew, set sail from the French Brittany port of Saint-Malo this evening bound for Plymouth and the official start village for The Transat bakerly 2016.

This non-timed Warm-Up is an innovation introduced by The Transat bakerly race owner and organiser, OC Sport, to give French race fans and campaign partners a chance to see the yachts and their skippers in Saint-Malo before they race single-handed across the Atlantic.

By the skippers’ own admission, the Warm-Up stage in Saint-Malo has proved very successful, attracting big public crowds, enabling partners to interact with the race and giving them visibility in France as part of a world-class event.

“The meeting of the fleet in Saint-Malo enabled me to compete in this race,” Class40 skipper Armel Tripon (Black Pepper Moulin Roty) revealed. “I was able to bring my partners to see the boat, which would not have been possible in Plymouth. The Saint-Malo warm-up has really brought the event alive ahead of the official race start,” he concluded.

“We’ve had a very warm welcome to Saint-Malo,” continued St Michel Virbac skipper Jean Pierre Dick. “The city has strong maritime links and it was very busy when we arrived.

“There has been the same excitement in the air as at the start of the Route du Rhum – Destination Guadeloupe, but without the pressure of a race start – just a nice family atmosphere.”

The Warm-Up also gives selected media and guests a chance to sail on the race boats with their skippers as they make their way to Plymouth ahead of the official race start on Monday May 2nd at 14.30 BST.

On the docks ahead of the race French ocean racing favourite François Gabart, sailing Ultime MACIF, reported he has enjoyed the atmosphere in Saint-Malo and was looking forward to the Warm-up leg with his guests.

“In Saint-Malo there is a great spirit of offshore racing,” said Gabart, winner of the 2012/13 Vendée Globe. “The public have been out in force to support us and we have a special connection with the people here that you don’t find in many places in the world.

“We have two guests onboard for the Warm-Up, it will be great for them to experience and see what we do on these boats, if only for a short while,” the skipper reported. “It will be quite cold tonight and most of the time we will be tacking upwind, which is difficult on this boat. But the passage will be quick and I hope the guests enjoy it.”

Speaking before his introduction to Gabart, Yves Marie-Derrien, a guest of The Transat’s title sponsor bakerly, was nervous but excited about meeting the skipper and sailing aboard the giant trimaran.

“I’m anxious to meet François,” he revealed. “I know all about him and his many achievements. I enjoy sailing, but I when you look at the high calibre of the competitors in the race it is impossible to talk about sailing or call myself a sailor. To sail aboard the Ultime will be an amazing experience.

Hervé Favre, event director for The Transat bakerly, was on hand to see the boats set sail. “This is the start of an exciting week for us as the fleet heads over to Plymouth and the final preparations for the race get underway,” he said.

“The Warm-Up is the first of its kind in professional solo racing and the response to the concept has been overwhelmingly positive in Saint-Malo where thousands of race fans have come to see boats and skippers who would have been out of reach in Plymouth,” added Favre.

The Warm-Up will see up to 20 knots of wind from the north east as the skippers leave France, dying down on the way into Plymouth. The majority of the passage will be upwind, which is a hard physical slog even for The Transat bakerly’s world-class skippers.

The current ETA for the four classes’ arrival in Plymouth is anywhere between 04:00am and 1400pm on Sunday 24th April. The skippers will dock into Sutton Harbour and Plymouth Yacht Haven before sharing breakfast with their VIP guests.

You can track The Transat bakerly Warm-Up here.

The Transat bakerly is the oldest solo professional yacht race and is one of the iconic events in world sailing. It was first staged in 1960 when a group of British sailors made a bet to see if they could sail across the north Atlantic single-handed.

That first race was won by Sir Francis Chichester on board Gipsy Moth III in a time of 40 days. Since then the race has been staged a further 12 times and has witnessed extraordinary tales of sporting success, heroism and occasional tragedy. Chichester made it across the Atlantic to the finish at New York in 40 days. This year the fastest boats in the Ultime class of giant trimarans could be tied up in ONE*15 Brooklyn Marina in as little as seven days after leaving Plymouth.