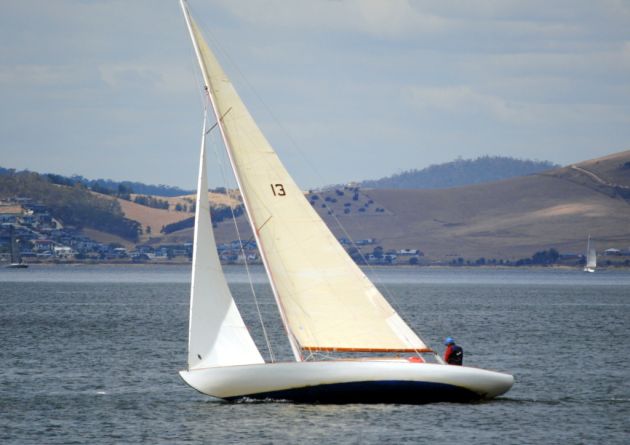 Bronzewing beating to windward on the Derwent yesterday

One only has to visit Hobart’s Australian Wooden Festival to realise how many fine craft, many built in Tasmanian by great craftsmen from the State’s famed boat-building timbers, there are still in existence. The majority at the Wooden Boat Festival are lovingly cared-for cruising boats, but there are still a few aged wooden ones racing with success with the yacht clubs on the River Derwent and down the d’Entrecasteaux Channel and in the Huon River.

Racing on the Derwent on Saturday in the Combined Clubs Harbour Series were two veteran wooden yachts; in the case of Charles Peacock and his 46-year-old classic sloop Serica, winning Division 4.

The Royal Yacht Club of Tasmania-based Serica, was originally designed by American Bill Luders while several re-designs are attributed to Sydney-based Peter Cole and Tasmanian Fred Peacock. She was built in Montagu Bay by Geoff Cuthbertson in 1969 and raced regularly ever since.

A starter in Division 6 was an even much older boat, Derek Adams’ Bronzewing, built in Launceston in 1898, a replica of the English yacht Challenger, a successful Thames River one-rater.

Owner Adams, who has restored the vintage yacht to racing order, described her as “like grandpa’s axe…over the years and many owners she has undergone many changes to her original hull.”

Bronzewing finished last in fleet, but then she did not fly a spinnaker. She has, however, had several division wins in twilight non-spinnaker racing this summer.

In Division 4 on Saturday, Peacock and his crew judged the start to perfection, hoisting the yacht’s large spinnaker right on the line to initially sail away from the fleet.

However, they didn’t maintain the lead throughout, finishing second in the division fleet to the bigger, modern yacht Zephyr, skippered by Ian Johnston.

Nevertheless, Serica was but far enough ahead of the rest of the fleet to take PHS handicap honours from Hornet (Neville Georgeson) and Miss Conduct (Brian Fleming).

Divisions 4 and 6 started off Castray Esplanade, sailing a course around harbour marks while Divisions 1 and 2 completed two windward/leeward mid-river courses, a tribute to the tenacity of race officer ‘Biddy’ Badenach in the changeable winds – from north-west to south-west and even south-east within a couple of hours, with ‘holes’ in between.

Yachting superstition has it that changing the name of a yacht brings bad luck, but this certainly appears not the case with Bellerive Yacht Club member Jeff Cordell’s Mumm 36.

Until late last year the Mumm 36 raced as Host Plus Executive, but with a change of sponsorship, her name is now B&G Advantage, competing in Division 1.

Fast boat speed in the light to moderate conditions saw B&G Advantage win both races under AMS scoring and the second race of the day under IRC ratings.

In race one for Division 1, B&G Advantage won on corrected time from Martela (Tony Williams) and Tas Paints, skippered in this race by Simon Desmarchelier, while in the second race Masquerade (Tony Harman) finished second with Martela third.

Under IRC scoring, War Games (Wayne Banks-Smith) won from Martela and B&G Advantage, with the order reversed in race two, with B&G Advantage winning from War Games and Martela.

The Farr 40 War Games took line honours in both races for Division 1, also taking PHS and IRC corrected time honours in race one.

B&G Advantage’s success yesterday has lifted the Mumm 36 to the top of the leader board in all three categories, AMS, IRC and PHS, of Division 1 in the Combined Clubs Harbour Series.

Trouble retains top place in Division 2, while Serica’s victory in Division 4 has moved her to number one in a close pointscore battle with First Light and Zephyr.