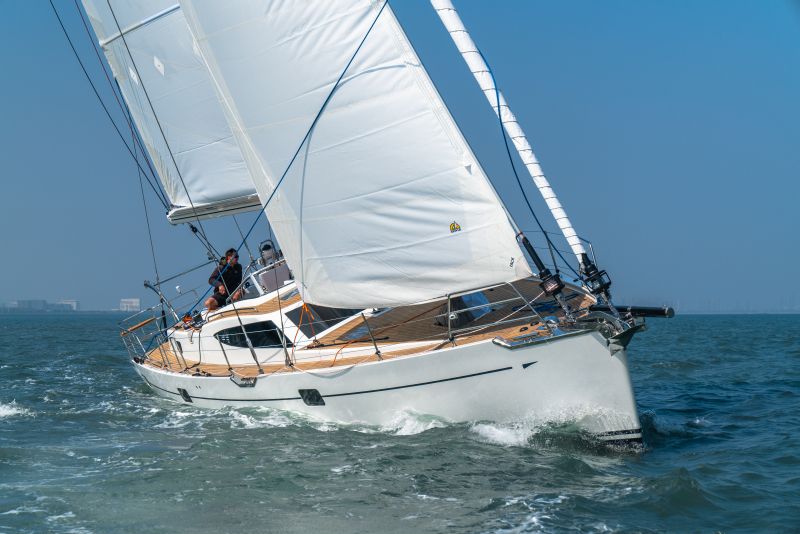 The Kraken 50, billed as the ‘safest blue water yacht in build today,’ has been launched. Unlike all her contemporaries the K50 features unique ‘Zero Keel’ construction: An all-in-one hull and keel with scantlings to match.

Her strength, safety and stability are thanks to an impressive 20mm lay-up, an integral keel, Kevlar reinforcements and a full skeg-hung rudder for ultimate protection.

The boat is inspired by Kraken Yachts’ chairman, Dick Beaumont, 65, a veteran ocean sailor with 225,000 nautical miles under his keel. He wanted a safe blue water yacht for his retirement, but to his dismay discovered that all the major blue water yacht brands were compromised by having bolt-on keels and/ or unprotected blade rudders.

‘They may be OK for general sailing,’ said Dick, ‘but for fail safe world cruising when you have your friends and family with you as you cross oceans, I don’t believe they are fit for purpose.’

He decided to have his own boat built: White Dragon, a Kraken 66, and the brand was born. She went on to win the coveted ‘Best Bluewater Cruiser’ award in the UK. An amazing achievement for the first yacht of the Kevin Dibley-designed Kraken fleet.

This has been followed by the Kraken 50 which has now been successfully sea-trialed. She clocked up an impressive 7 knots, in just 10 knots of true wind, increasing to 8 knots plus with the cruising chute or reaching genoa set as the breeze filled in.

Mark Fullerton, MD of Doyle Sails China, who built the K50 sail wardrobe said: ‘The design principles employed by the Kraken Yachts team in the build of their yachts demonstrates a unique understanding of the requirements of blue water cruising sailors.’

It’s for all these reasons, plus the K50’s comprehensive overall spec, that ocean yachtsman David Wilkinson, a 56-year-old financial adviser with more than 25 years offshore sailing experience, chose the Kraken over the other established brands, many of which he considered and dismissed, as he searched for the right yacht to sail off in. David, one of the sailors who re-created Captain Bligh’s mutiny on the Bounty, open-boat voyage of 4,000 miles across the Pacific, knows a thing or two about survival.

He said, ‘During that grueling passage I soon began to realise that safety on any ocean going yacht was the first and foremost consideration. I was lucky to be sailing in the company of two very experienced yachtsmen, one a naval architect, and I began to question them, make notes and list the attributes of any future sailing yacht I would contemplate owning, and it was SAFETY, SAFETY, SAFETY which came up every time.’

David plans a circumnavigation in Seneca, his K50, as well as long distance cruises in the South China Sea from his base in Hong Kong with his wife, two daughters and pet dog, Max.

He explained, ‘Because my sailing will include taking my family I needed a boat which could be sailed short-handed, in which all lines could be controlled from a deep, well-protected cockpit, which had practical living arrangements and good stowage space. I discovered the Kraken 50 ticked all those boxes and more, as well as the safety design qualities which led me to her in the first place.’

He added: ‘I also wanted a yacht that turns heads when arriving at the marina. Call me vain, but life is too short to own an ugly boat!’