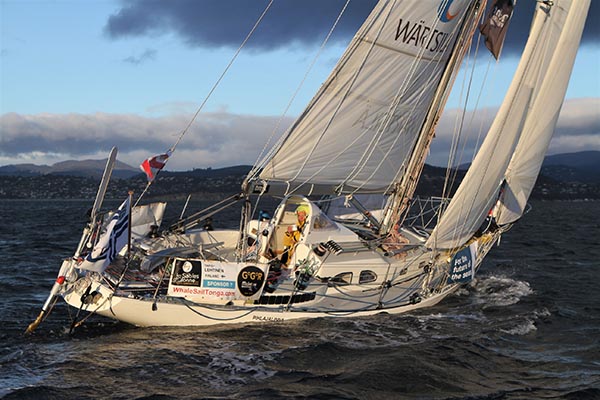 Tapio Lehtinen and his Gaia 36 Asteria finally finding wind shortly after dawn on Tuesday to beat up the Derwent river to the BoatShed.com Film Gate. Photos Jessie Martin/PPL/GGR

As Tapio Lehtinen, the last of the Golden Globe race skippers, crossed the Equator on Tuesday to start the last part of his solo circumnavigation back to Les Sables d’Olonne, plans are now well advanced for the GGR prize-giving celebrations in the Vendee port over the Easter Weekend 19 – 22nd April.

The Finnish skipper who has been slowed by increasing barnacle growth on his Gaia 36 Asteria since crossing the Indian Ocean last October will miss the party – he is not expected to reach the finish line until late May at the earliest – but will join the other skippers via a satellite phone link.

Despite his extended time at sea, Tapio has plenty of food on board and has retained his sense of humour. On April 1, The Finn alerted Race HQ that he had met up with a boatload of girls in mid-Atlantic who, braving shark attacks, had dived over to rid Asteria of her barnacle growth. His Facebook post caught more than a few, some questioning whether this was outside assistance.

All other skippers, bar Australian Kevin Fairbrother, currently climbing Mt Everest for the fourth time, will be attending the prize-giving. Most will be available for pre-booked one-to-one media interviews over the Weekend.

So too will eight of the 2022 GGR Race entrants, all keen to learn what they can from the 2018 Race skippers. The Suhaili Class for prescribed long keeled yachts between 32-36ft is already fully subscribed with 20 entrants representing 10 countries, 12 of which already have boats. Three hail from Australia, two from France, seven from the UK and two from the USA, together with one each from Austria, Canada, Italy, Ireland, New Zealand and Norway. A wait list is now open to accept provisional entrants and these skippers will be announced at the GGR Press Conference on Monday 22nd April.

There is also strong interest in the 10 places available in the new Joshua Class racing 40ft purpose-built steel replicas of Bernard Moitessier’s classic yacht. The first of these is expected to be launched this winter when entries for this class will open. For those keen to have a test sail, The French Maritime Museum based in La Rochelle will have Moitessier’s original Joshua in Les Sables d’Olonne for the Easter weekend offering the opportunity to sail on her.

Sir Robin Knox-Johnston’s independent report on lessons gained from handling small yachts in survival conditions during the GGR will also be published at the GGR Press Conference on April 22 with a live link and question/answer session with GGR skippers and Sir Robin in Falmouth, where the original Golden Globe Race skipper will be celebrating his victorious return to the Cornish port that day 50 years ago. The Press Conference and Sir Robin’s Q&A session will be broadcast live on Facebook.