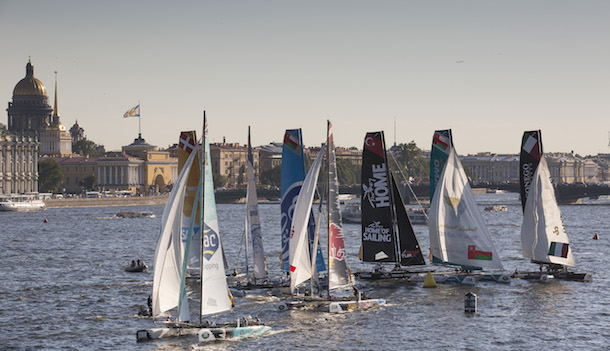 GAC Pindar lead the Extreme 40 feet downwind in the last race of the day in Saint Petersburg. Photo Lloyd Images

The Wave, Muscat sailed a text book penultimate day at the Extreme Sailing Series™ Act 6, Saint Petersburg presented by SAP, adding an impressive 65 points to their score line over eight races. Helm Leigh McMillan now holds a 20-point buffer at the top of the leaderboard going into the final day of racing on the River Neva tomorrow.

On the dock, McMillan was quietly pleased with his day: “We made the best of all the opportunities and were in the right spots at the right time, it just worked today. We’ve got different conditions on the forecast tomorrow so we just have to keep our focus all the way to the end.”

After a strong start to the Russian Act leading at the end of the opening day, Red Bull Sailing Team, helmed by Austria’s legendary Olympic sailor Roman Hagara, today struggled to find their flow. Three low scoring races in the middle of the day saw the team almost lose their grip on the podium, only just holding on to second place by one point, on 161 at the close of play.

Giving the Austrians a run for the their money, Lino Sonego Team Italia exploded on to the racetrack this morning with back-to-back wins on the tricky tidal course. In the fluctuating six knot breeze the duo of Enrico Zennaro as skipper and Switzerland’s Arnaud Psarofaghis on helm continued their sparkling form with a string of podium results, finishing the day one point off second place Red Bull Sailing Team in third place.

The Italian’s now have an eye firmly fixed on their first ever top-three finish, since joining the fleet at the beginning of the year. Zennaro said: “We want this. It felt like Red Bull Sailing Team performed better than us today, but on points we actually did better. Tomorrow will be our day and we hope to stay on the podium.”

Elsewhere in the fleet, Oman Air hover 13 points off the podium in fourth on 147 with SAP Extreme Sailing Team one point behind in fifth. GAC Pindar had an exceptional day, second on the day’s leaderboard only to The Wave, Muscat, giving the British-flagged boat a well deserved confidence boost and gaining a place on the leaderboard moving up to sixth at the close of play.

“It’s been a real learning curve for me figuring out what I can and can’t do driving this boat, some tough lessons and tough points,” explained new helm Kiwi Adam Minoprio. “But I’m learning fast and hopefully we can kick some ass tomorrow.”

Home favorites Gazprom Team Russia suffered a string of last place finishes today, dropping down the leaderboard to seventh with Team Turx rounding up the rankings in eighth.

As the sixth stop on the eight Act global tour, the Series is well and truly into the business end, and one man who is clearly focused on the bigger picture is Leigh McMillan. In the final races today the crowds that lined the beach at the Peter and Paul Fortress witnessed McMillan hunt his biggest rival for the overall Series title, Danish team SAP Extreme Sailing Team, around the track, seemingly trying to push the Danes as far down the rankings as possible. Currently 20 points off The Wave, Muscat in fifth and with a target on their back, the Danes will need to work hard tomorrow to keep McMillan in their sites.

The final day of the Extreme Sailing Series™ Act 6, Saint Petersburg presented by SAP, including the all to play for double points final race, kicks off tomorrow from 14.30 (GMT+3) with live coverage from 16.00 (GMT+3) on www.extremesailingseries.com/live