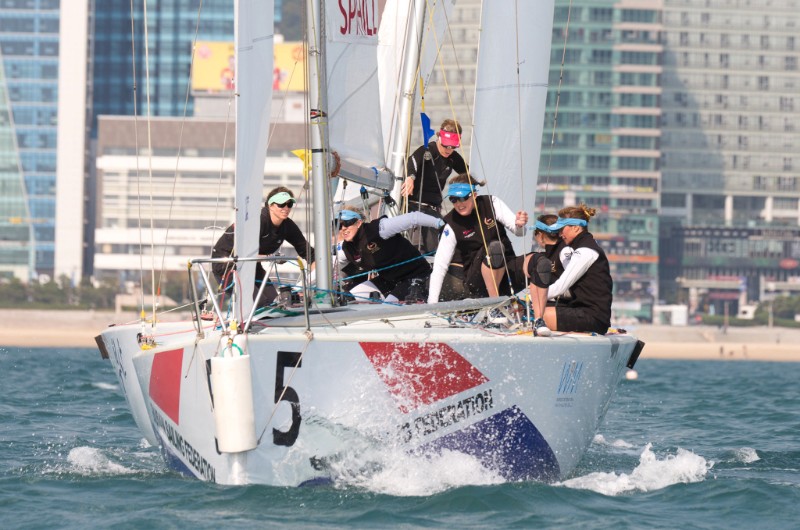 “I’ve mostly been sailing Nacra 17 and Etchells classes. They’re very different beasts, both providing close racing at a very high level, but I haven’t done any match racing since Busan two years ago. We will have to hope for as much racing as possible, and learn as the event goes on” Macgregor reveals.

As an event on the 2016 WIM Series, the Busan Cup Women's International Match Race in Busan, South Korea, attracts a whole bunch of the top class teams that travel around the globe to do as many events as they possibly can. In 2016 Busan is one of five chances to gain valuable WIM Series points, which makes the regatta important for regularly competing teams. But being a match racing team on WIM Series is very demanding, as it takes a lot of effort and time away from your family, as well as stable funding, to keep a crew together and well prepared for all the events. Some teams simply can’t afford to attend all events.

This is why Busan every year also welcomes a few wild cards, who do the regatta as one of very few or their only event for the season. The younger wild cards get a chance to see how it is to race on WIM Series, and they can benchmark and learn from the leading crews. For the veteran wildcard crews it’s more a matter of staying in touch with match racing, meeting old sailing friends, testing their capacity against the more frequent teams, or maybe trying to get a part of the very generous prize purse of 100 000 US dollars, the biggest on the WIM Series.

Five times Women’s World Match Racing Championship medallist and 2007 World Sailor of the Year, Claire Leroy, is one of the veterans coming to the Busan Cup Women's International Match Race next week. Her last appearance in Busan was four years ago, and now she’s excited to be back, participating in a WIM Series event for the first time since her debut in Lysekil in 2013:

“I’ve had a daughter and have spent some time with her. Now it’s time to get the team together and have some fun sailing again. We love racing in Busan, and we’re happy to make our comeback there” she says.

Lucy Macgregor won the inaugural 2013 WIM Series overall, and triumphed in her latest match racing performance in Busan 2014. This year she started with a 4th place in the Sailing World Cup in Nacra 17 in Miami, and over the summer she’s been crewing an Etchells to victory in the Quarter Ton Cup:

“Unfortunately we couldn’t fit in any match racing practice before the Busan event, so we will be hoping to remember how to do it as quickly as possible. Having been out of the game for a while, I’m not sure we can expect to repeat the success we had last time. We will aim to get into the semis, and everything from there will be a bonus” Macgregor states.

Australian Katie Spithill finished runner-up behind Anne-Claire Le Berre of France in Busan last year, and has since then been busy with juggling family life and work. She’s also started to learn how to sail the foiling Moth, and to keep fit and busy she’s been running. Earlier this year she did a marathon:

“Unfortunately we haven’t done much match racing practise, but this event is a great opportunity to sail with good friends against competitive teams. Our goal is of course, as always, to win” Spithill concludes.

The Busan Cup Women's International Match Race in Busan, South Korea, will kick off the round-robin racing on Tuesday the 25th of October, with final races, prize giving and closing ceremony on Saturday the 29th of October.