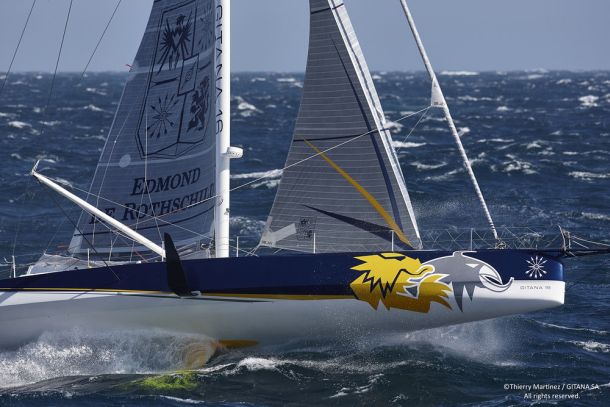 Sébastien Josse has declared his intent to be on the startline of The Transat 2016 with the new Open 60 Edmond de Rothschild. Photo © Thierry Martinez / Gitana SA.

The Transat – the oldest race in professional sailing – is now open for entries as the build-up to the 2016 renewal of this North Atlantic solo classic continues apace.

With over 40 skippers competing in four classes expected on the startline in May next year, Event Director Hervé Favre of race owner and organiser OC Sport, is expecting a high quality field.

“The Transat is one of the greatest of the classic solo races in world sailing and we are expecting a competitive entry in all four classes,” said Favre. “This has always been a big race to win and the 2016 edition will be no different.”

The Transat will be fought out in four separate classes – Class40, (40ft Monohulls), Multi50, (50ft Multihulls), IMOCA, (60ft Monohulls) and the so-called Ultimes, the big Oceanic Multihulls class. Entries are expected in all four categories from all over the professional sailing world and especially from France and Britain.

A veteran of the race in 2008, Merron is ready to put her new boat through its paces on a classic windward course that can produce very rough conditions, not to mention freezing fog, ice and the ever-present danger of commercial shipping.

“I am looking forward to competing again in this formidable race. I haven’t quite forgotten just how rough, cold and foggy an adventure it can be at times,” Merron commented.

Also declaring his intent to be on the startline is the highly experienced French solo skipper Sébastien Josse at the helm of the new Open 60 Edmond de Rothschild. Josse will race in The Transat as part of his build-up to his third attempt at the Vendée Globe solo round the world race that starts in November next year.

“The Transat is a different kind of race! A quick scan of the winners’ names tells you all you need to know about the historical significance of this competition. This will be my third participation and Gitana Team will be defending its title as the last winner of this legendary transatlantic race was none other than Gitana Eighty, helmed by Loïck Peyron”, commented Josse.

“Taking place just six months before the start of the Vendée Globe, it will be the perfect trial run for both the Mono60 Edmond de Rothschild and for me. This is especially true given that on paper the route, a westbound crossing of the North Atlantic, does not typically play into the hands of the latest generation boats and their foils. It’s a physically challenging race and these 2,400 miles in competition mode, where both the boat and the skipper are fully powered up, will be a very important step in our preparation for the round the world race.”

Coinciding with declaring the race open for entries, Favre is also publishing the official Notice of Race this week for the 2,400-mile marathon from the UK to the United States, as well as a prologue race from Brittany to Plymouth setting off on the 24th April.

The race charts a course from Plymouth in the southwest of England to New York where the finish line will be set for the first time since the inaugural race in 1960, that featured four skippers, among them Sir Francis Chichester.

The Transat was originally known as the OSTAR and has been a proving ground for many of the greatest sailors in modern solo racing, among them Chichester, Eric Tabarly, the father of French ocean racing, and Dame Ellen MacArthur. Amongst other well-known sailors, Loïck Peyron of France has won the event three times.