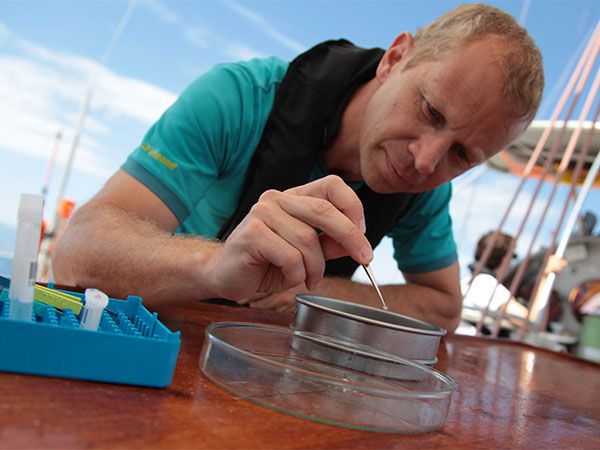 Powerful images of marine animals choking on plastics; frightening statistics on the amount of trash found at sea; discovering that even the most isolated places in the world are polluted by our consumer products – all these messages have made a strong impression on public opinion which today is calling for a transition away from plastic.

Scientific research in the field is advancing rapidly but is not sufficiently involved in political and industrial decisions. Solutions must take into account both the reality of the natural environment and the potential for innovation existing in research laboratories. Current 'bio' solutions – bio-based, biodegradable, non-toxic and recyclable – do not respond to the reality of supply and demand, nor to the ambition of “zero impact on the environment”.

The Tara Ocean Foundation has been working with scientists for more than 10 years on the issue of plastic pollution. Tara’s research revealed this pollution in remote areas of the Arctic, brought attention to the situation in the Mediterranean (the world’s most polluted sea by microplastics), and continues to ask questions about the impact of plastic on biodiversity.

On June 8, World Oceans Day, the schooner Tara begins her new “Microplastics Mission” – a study along 10 of the biggest rivers in Europe to seek out the origins of plastic pollution. It’s estimated that 80% of the plastics found at sea actually come from the land via rivers! And Europe, the world's second biggest producer of plastic waste (after Asia), is part of the problem.

Since plastic waste transits from land to sea, the solution will not come from “cleaning up” the Ocean. It doesn’t help to mop up a leak if the faucet isn’t closed. The most urgent problem is on land, at the source of this pollution which comes primarily from our packaging. Today the priority must be given to reducing packaging which alone accounts for 40% of the world’s production of plastic. Our trash bins are overflowing!

What solutions can be found on land? The Tara Ocean Foundation proposes several ideas in an approach to developing a circular economy:

Nature doesn't produce waste. Plastics at sea have become a symbol of man’s impact on the environment. So that our “plastic footprint” is not passed on to future generations, science and innovation must be key players in the transition away from plastic. We must change the current situation to avoid having more plastic than fish in the Ocean 30 years from now.

Let’s meet the challenge that in 2050, plastic waste is no longer a marker of our impact on the Ocean’s biodiversity.