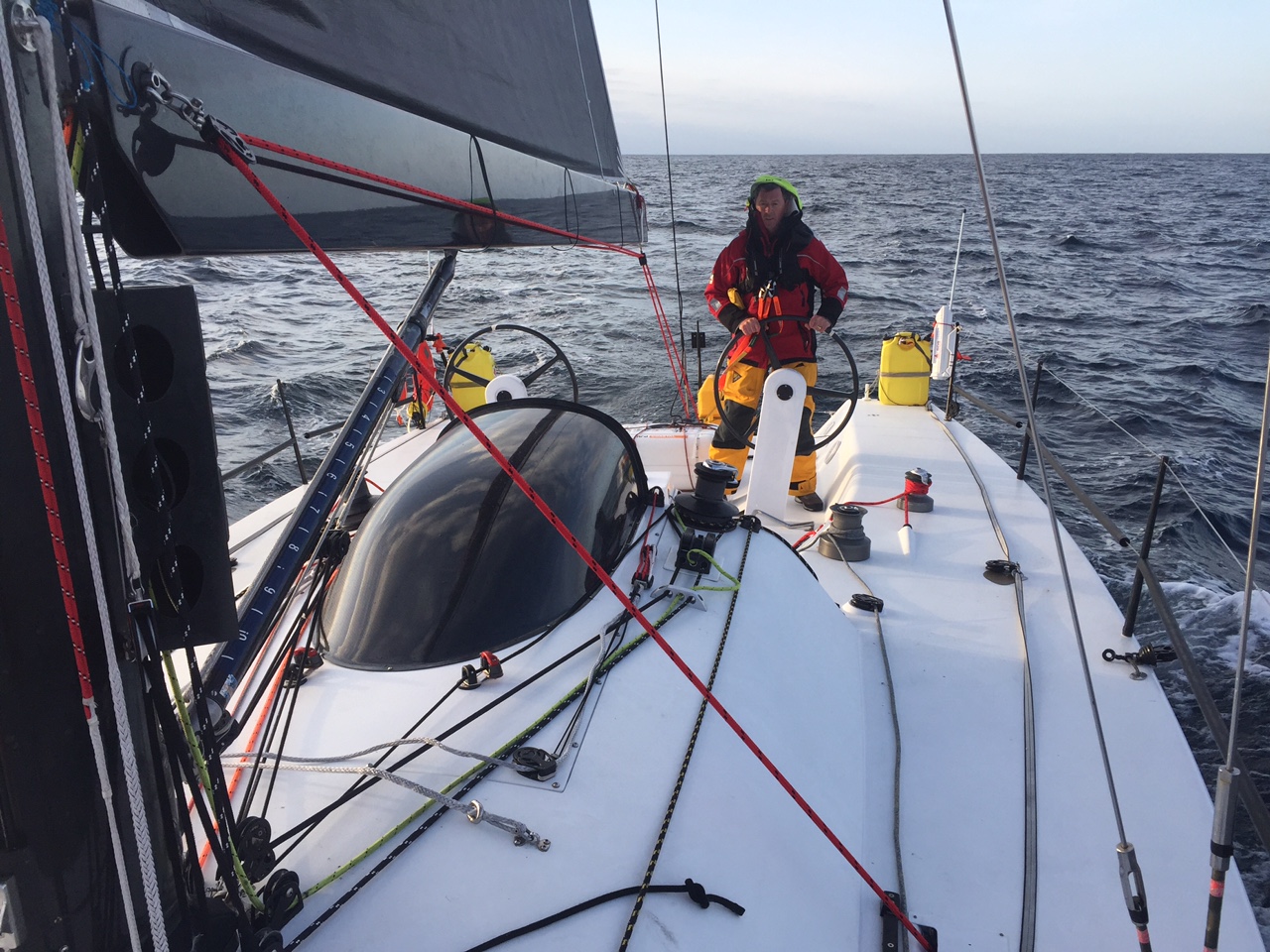 On board the brand new Avalanche - Courtesy Hugh Ellis.

It’s not actually that long a story – though it took longer than expected, when last year, Hugh Ellis asked Gary Caulfield if he would like to do the 2015 Rolex Sydney Hobart on his Beneteau First 44.7 Twitch.

Caulfield thought: “Why not?” He brought with him a lot of the guys he’d sailed with for years from the famous little Hobart veteran Toe Cutter, including her designer Robert Hick. For Ellis, this was a real step up. He’d been something of a latecomer by ocean racing standards.

“In my 20s I was bored with life. I was just working, paying the bills, you know how it is.  And I read Kay Cottee’s account of her single-handed voyage around the world on her little Cavalier 37.  This apparently ordinary woman went non-stop around the planet while I was sitting here complaining about being bored!  So I went down to the local yacht club, signed up, and the first time I raced, it was a light bulb moment.”

Now Ellis had his own boat plus a really experienced, competitive crew.

“The core group has been sailing together for 15 years. They have won most of what they wanted to win. Some have won Hobarts. Everything is calm, always under control. Any problem is dealt with methodically. They just get on with the job. There’s no yelling between the cockpit and the foredeck.  Robert Hick only speaks when he has to speak, but you step back and listen.”

Ellis’ first Rolex Sydney Hobart was a strange affair. “It was easy all the way to Tasman Island, but that last leg, three times it went from 0 to 45, 50 knots. We lost all our headsails.

“You do your first Hobart to tick the box. You do your second because you are addicted.”

When they got to Constitution Dock, Ellis asked Hick: “How do you win this thing?”

“Build a new boat,” Hick replied.  And Avalanche was conceived.  It would be an 11-month gestation.

“The more I’d spent time with Hick on Toe Cutter, the more I’d wanted to do this,” says Caulfield. “A mix of old-style design, hand built, a completely different style focused on maximizing rating (the complex IRC handicapping system designed to give boats of all sizes and ages a winning chance).

“My last boat, Icefire, was a great boat to sail, very fast, but she rated terribly. It was very frustrating.  We’d have a lot of fun racing, get there quickly, but never win because she rated so badly. It does come down to rating. I had been talking to Hick about it for years. With Hugh and me together, it made the costs better. It was too much of an opportunity.”

So it was settled. Robert Hick would draw a boat specifically designed around the Rolex Sydney Hobart, then he would build it, piece by piece, in his Melbourne factory.

“It is hard to build a boat in Australia. Everything has gone off to China. But we wanted something built locally, and the more time you spend sailing with Robert, the more you realize how much he thinks about the Hobart and what it takes,” Ellis says.

“It’s all handmade. Every fitting, the carbon-fibre boom, the steering pedestals; everything has been done by hand in Robert’s yard.

“Robert drew up the plans on his computer and sent them off to a factory where they cut four polystyrene moulds.  We bought them back to Robert’s yard on a truck over four different trips, joined them up – giving us the full mould for the hull.  Then we watched them lay up the glass, carefully hand-sanding every layer. The hull looks so smooth – faultless,” Ellis ended.

“It has been such an exciting project,” Caulfield adds. “A while back we marked 4000 hours of labour that had gone into Avalanche. It is a lot more than that now. A Beneteau built in China probably gets a couple of hundred hours.”

It’s still about the Hobart, of course, but after so many hours together down at Hicks factory, for the designer, the crew, the two owners, sharing a beer, touching the hull and spars as they evolve, it has become a lot more than that.

Avalanche’s design distills 70 years of Hobart history. A 40 footer takes three to four days to get to Hobart from Sydney. She may start in a brisk nor-easter but at some stage she will have to fight her way through a southerly, maybe two.

“We won’t be planing downwind like a Chutzpah,” Ellis says. “Our goal will be making the most of the upwind work, sailing to the best of our handicap, so that we are pulling time out of the purpose built 45 and 50 foot boats.”

Avalanche was supposed to hit the water in October, but these things never go to plan. In the end, the crew had just two November weekends to play with her before the delivery voyage to the Cruising Yacht Club of Australia’s Sydney marina.

Still, Ellis is confident. “It is a fairly simple boat.  It’s making all the right noises, hitting the right numbers, but we won’t really know until we get out there on Boxing Day.

“To win the Hobart you need the right boat, a good crew, and when you get to Tasman Island, a lot of luck,” the Victorian says.