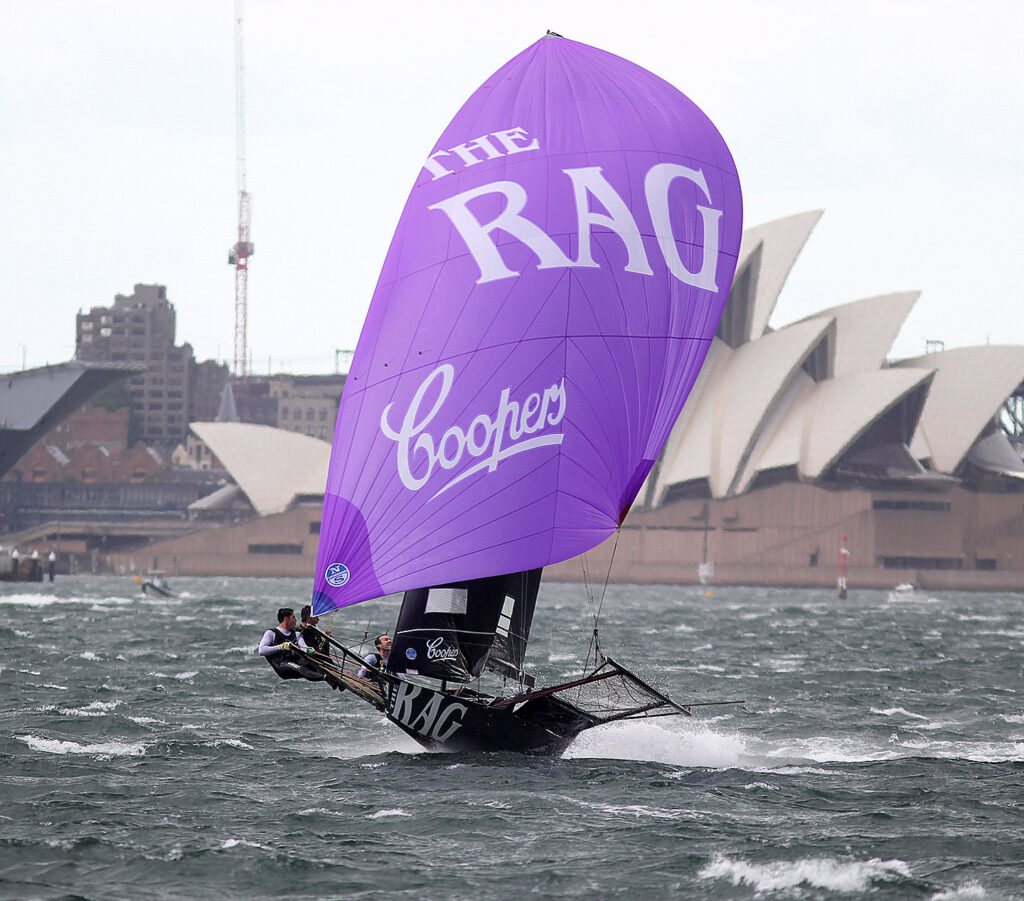 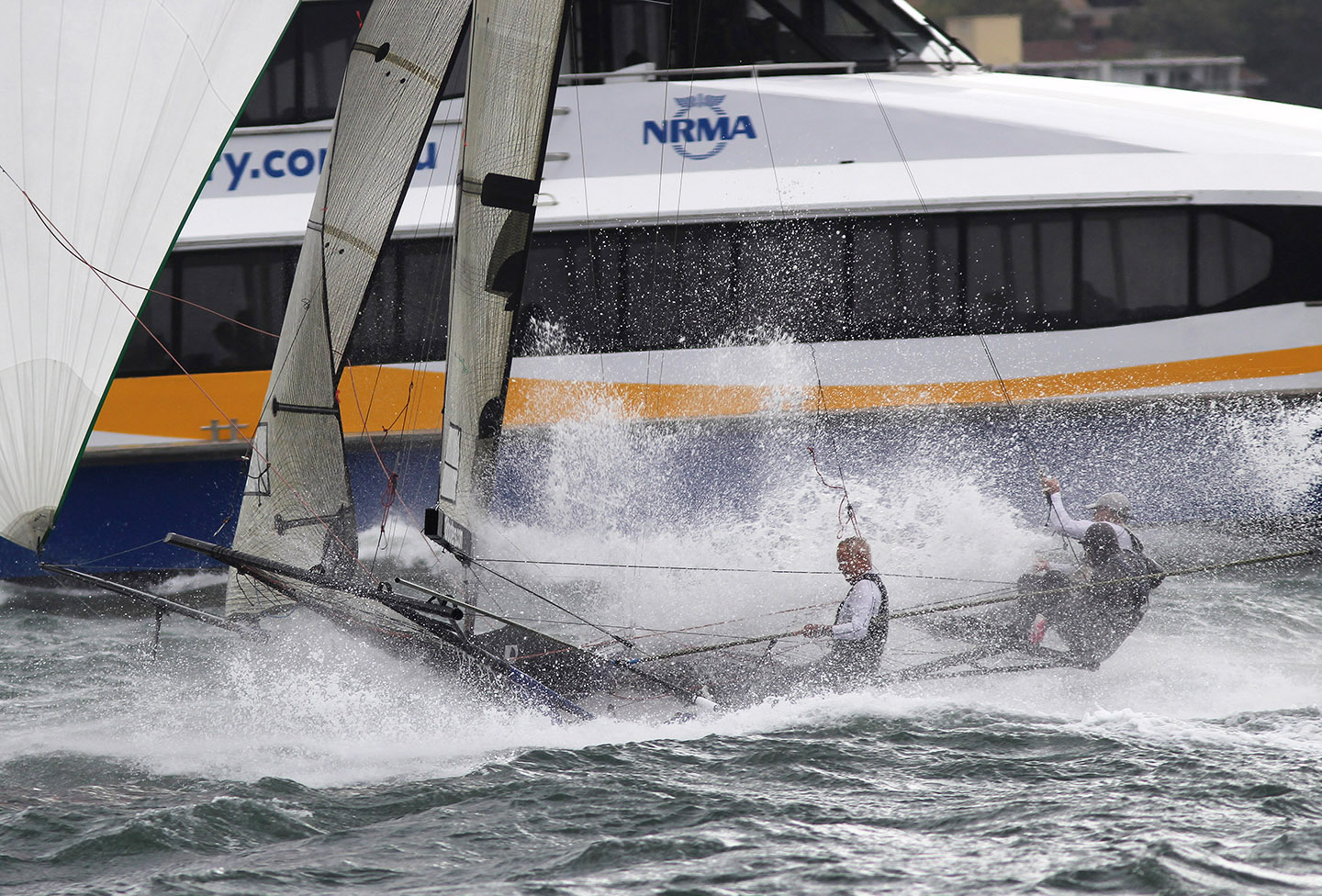 Yandoo, at speed, has to avoid a Sydney Harbour Ferry. Pic - 18ft skiffs 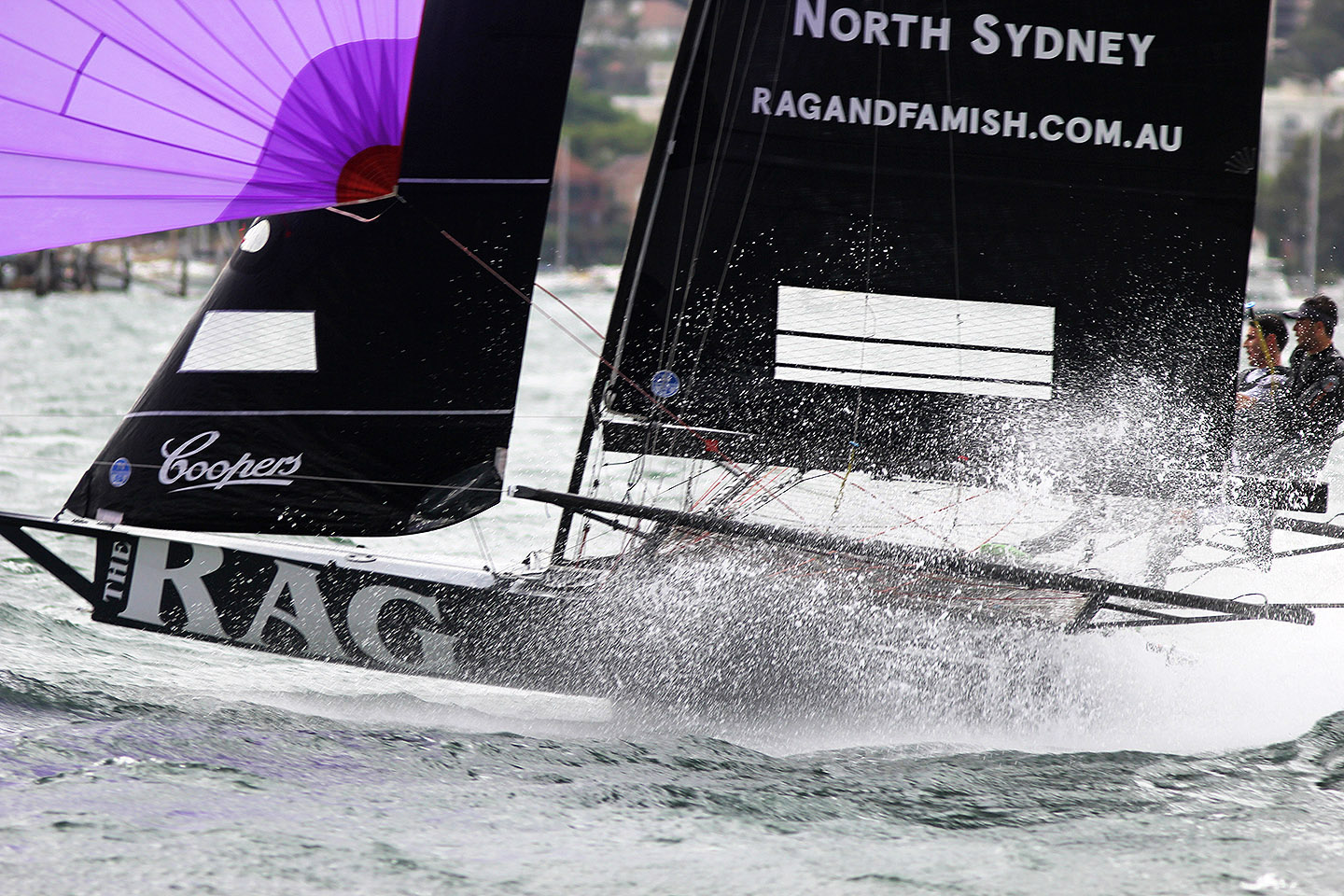 The Rag racing to the bottom mark in Rose Bay. Pic - 18ft skiffs 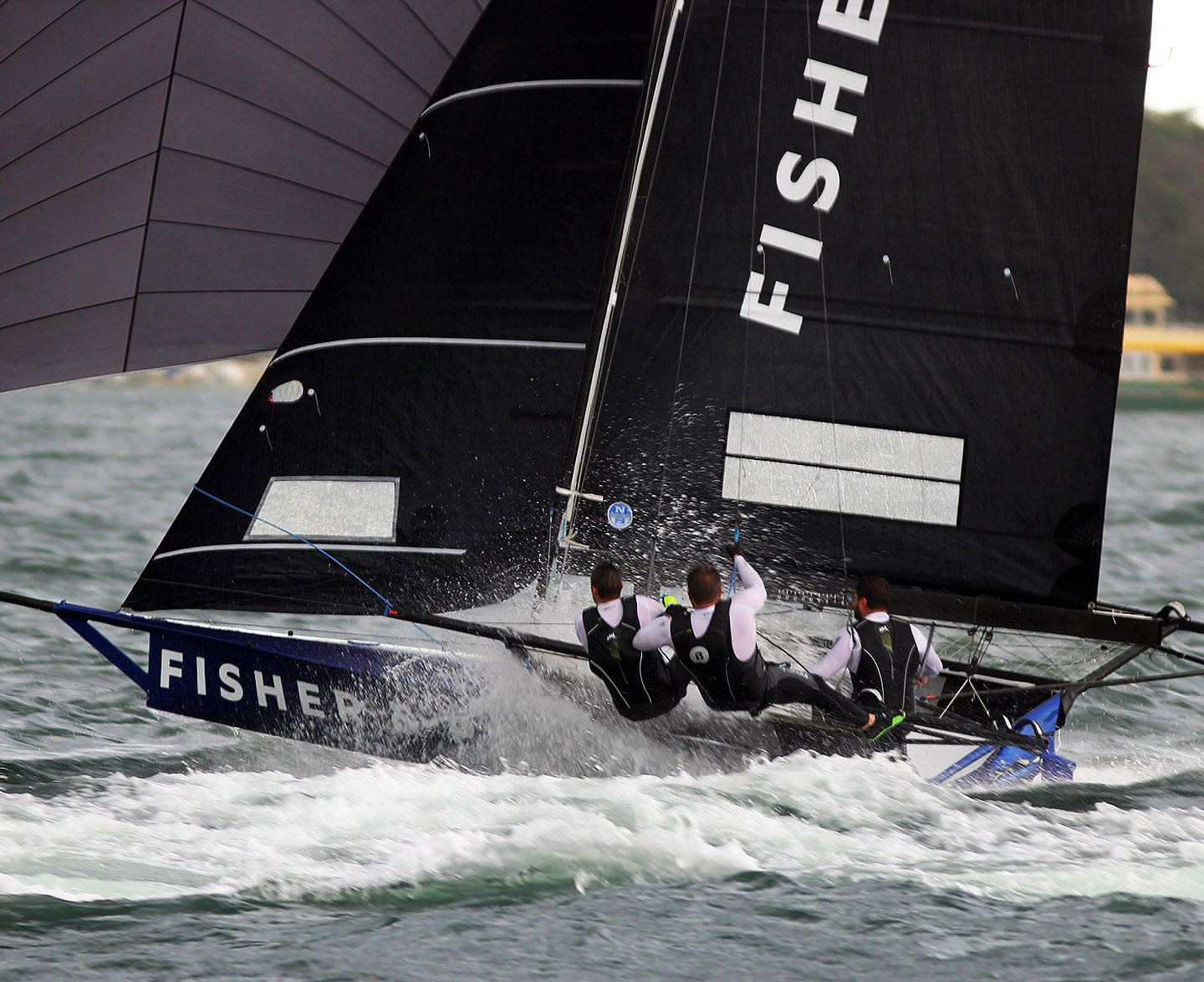 The crew hard at work on the flying Fisher & Paykel. Pic - 18ft skiffs 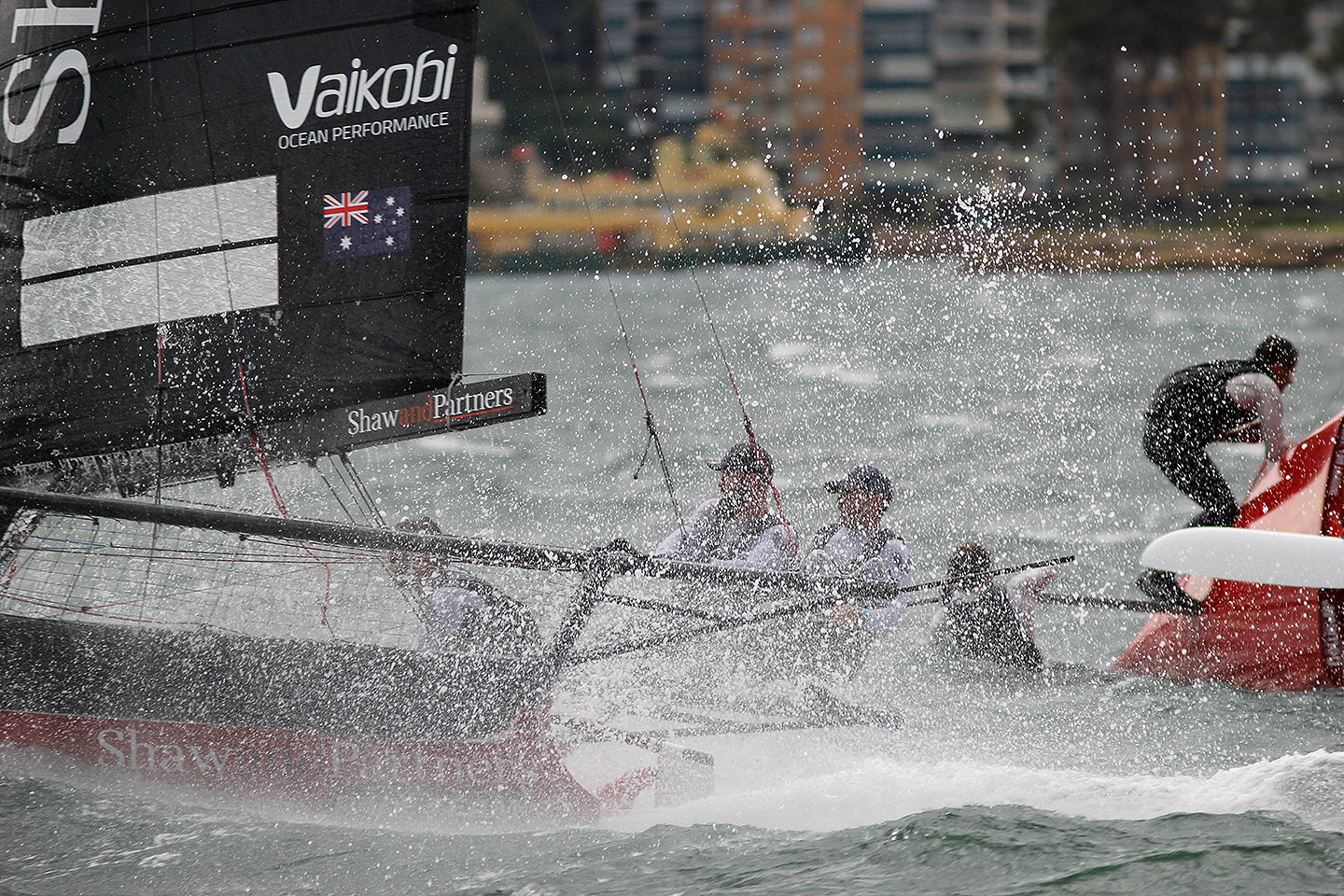 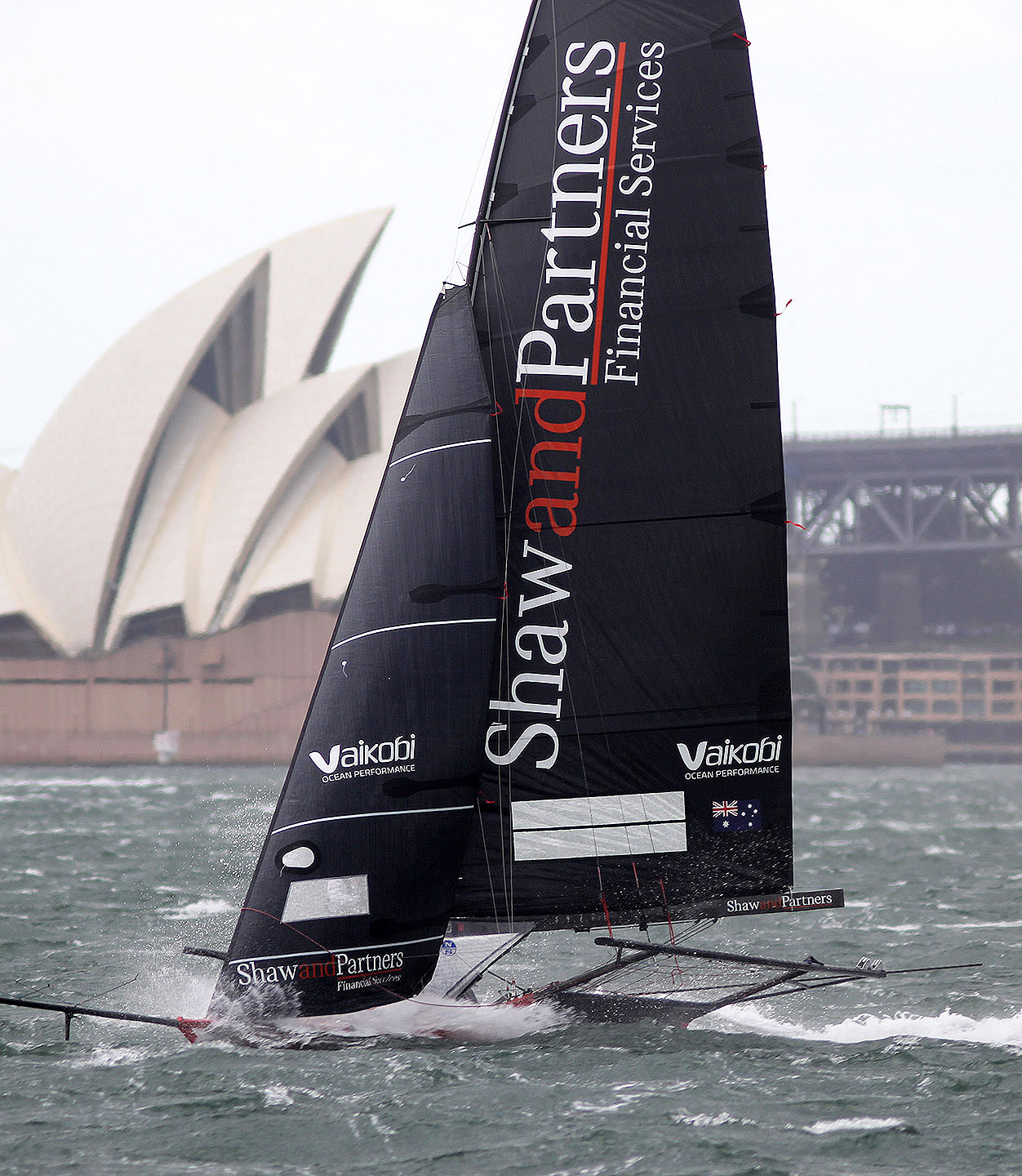 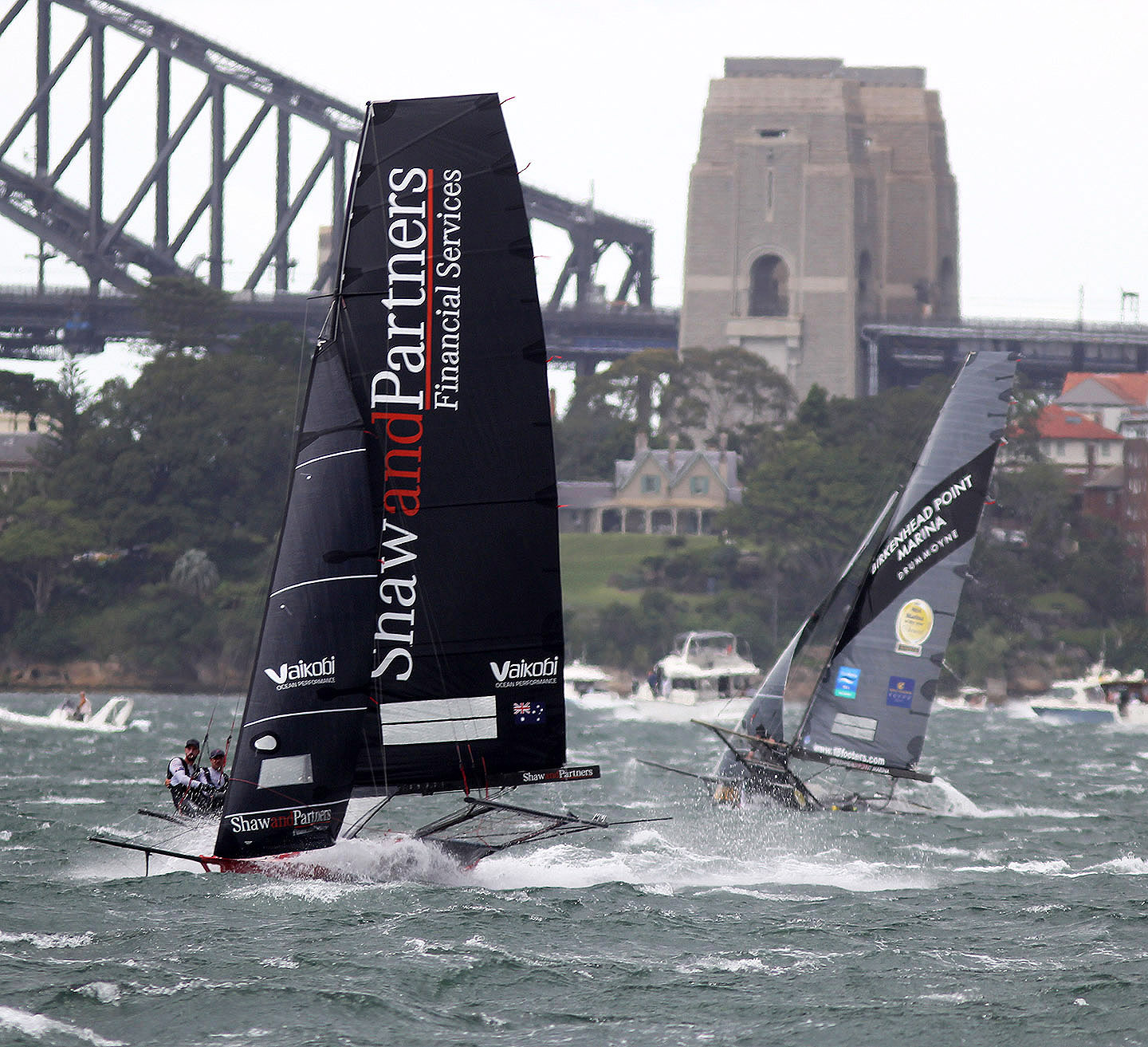 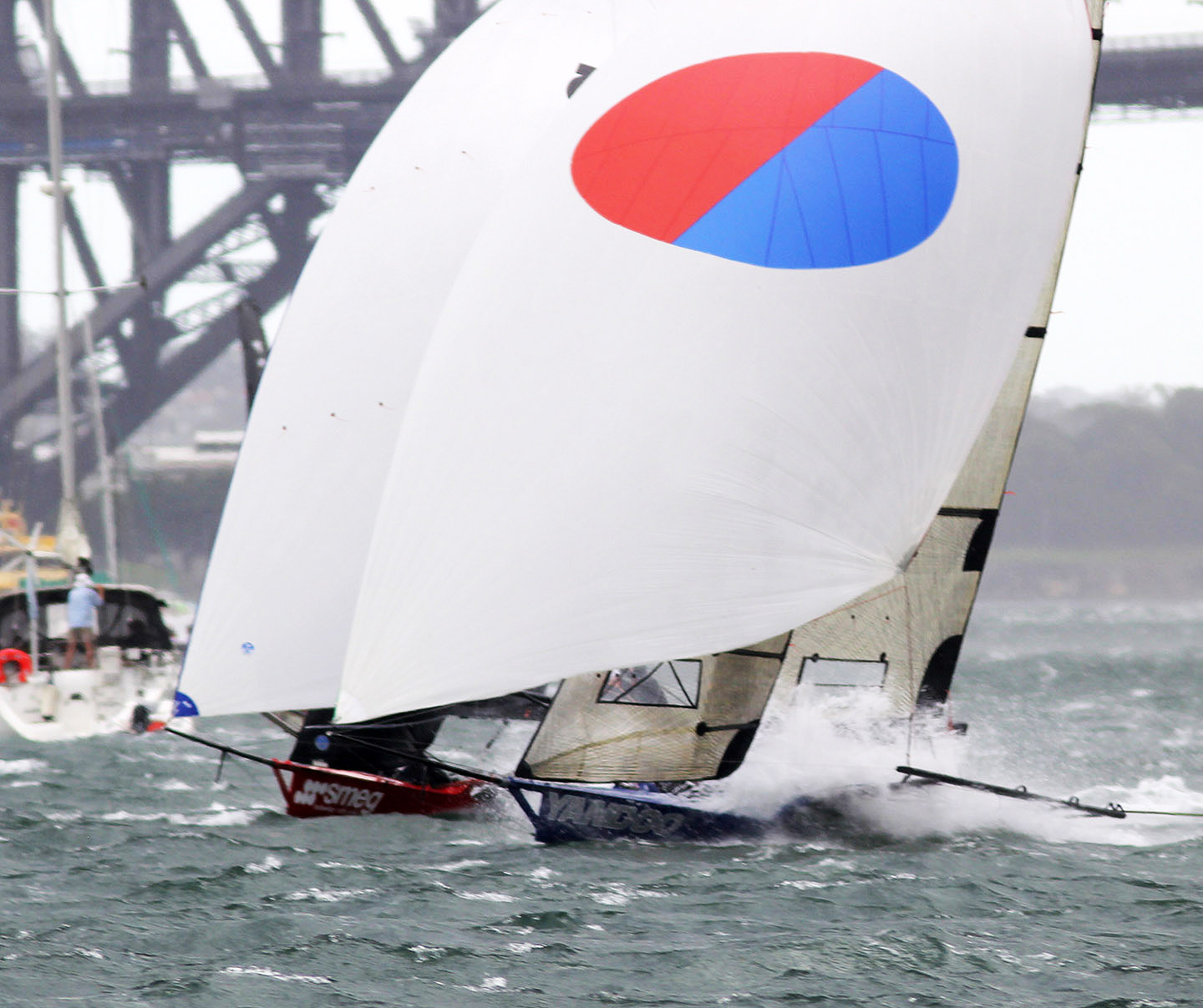 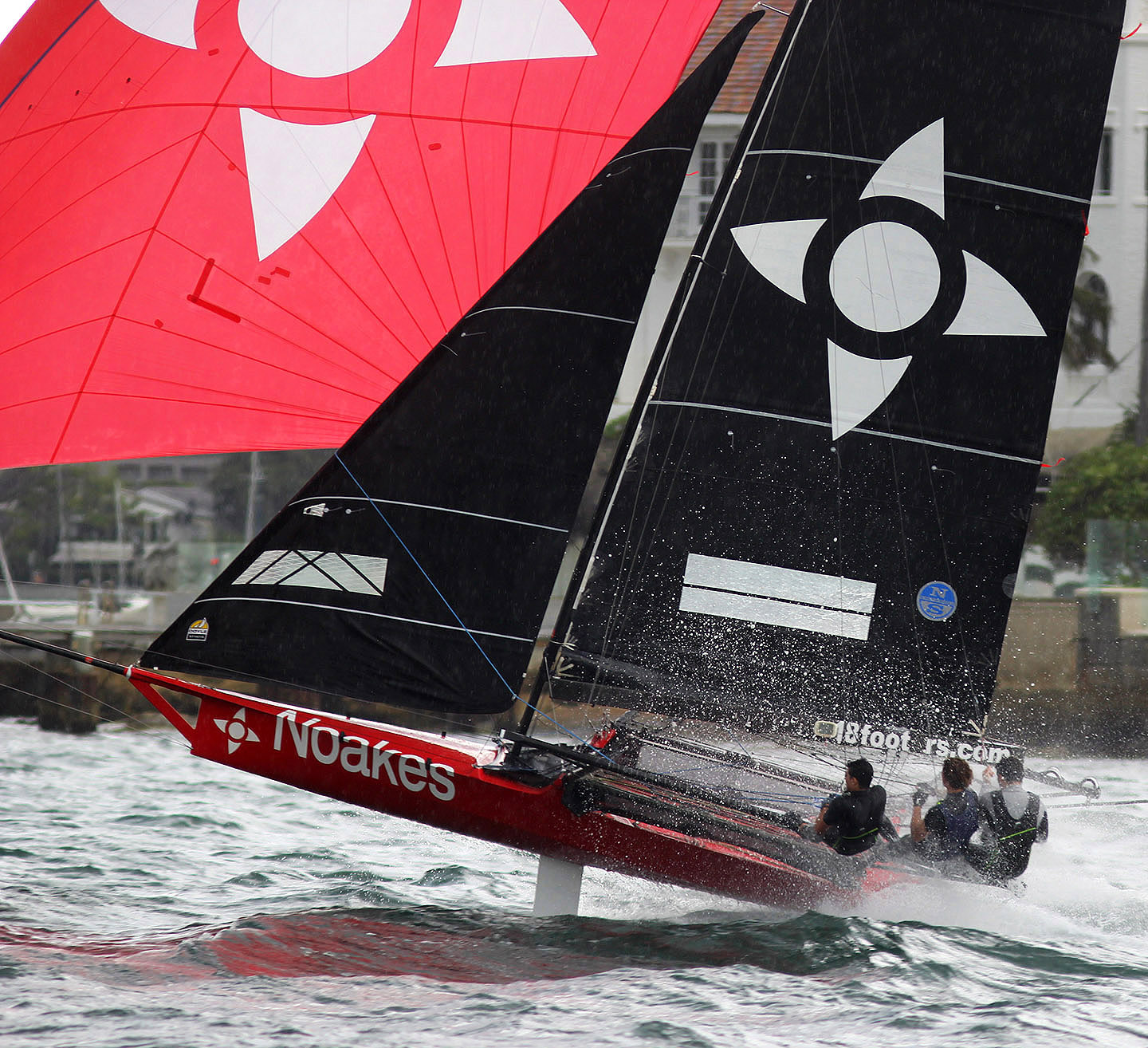 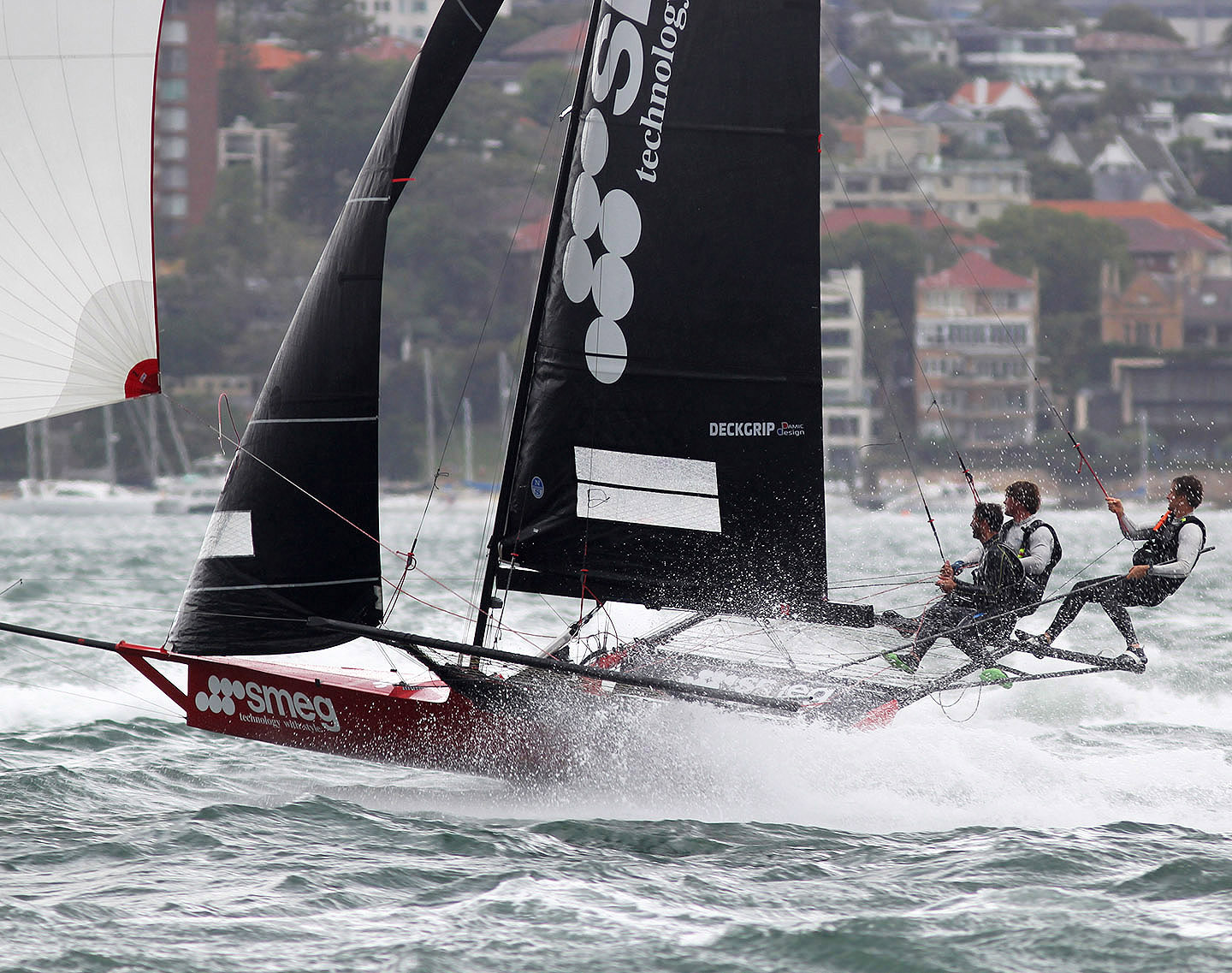 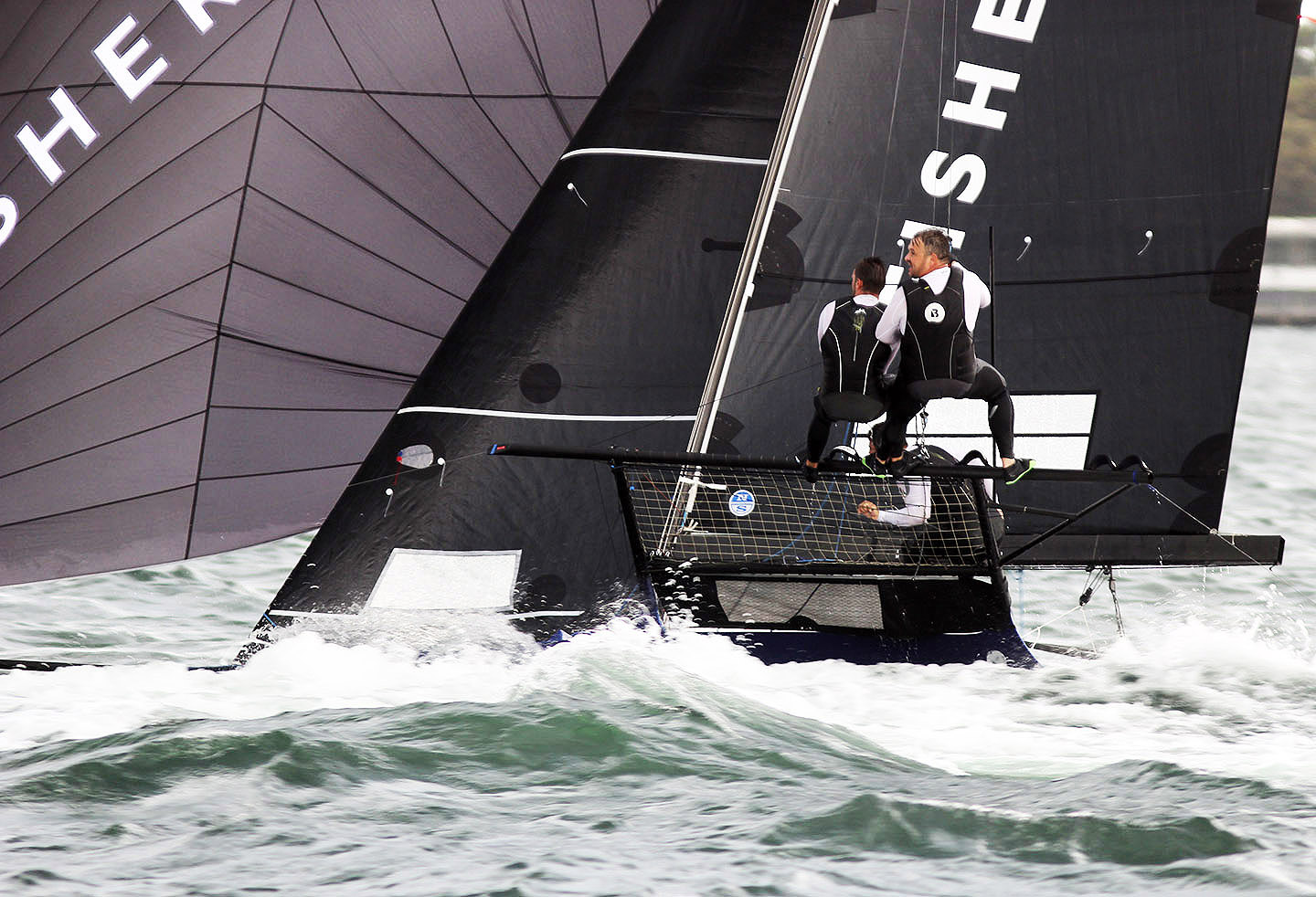 Fisher & Paykel's team had to survive the wake of a power boat. Pic - 18ft skiffs 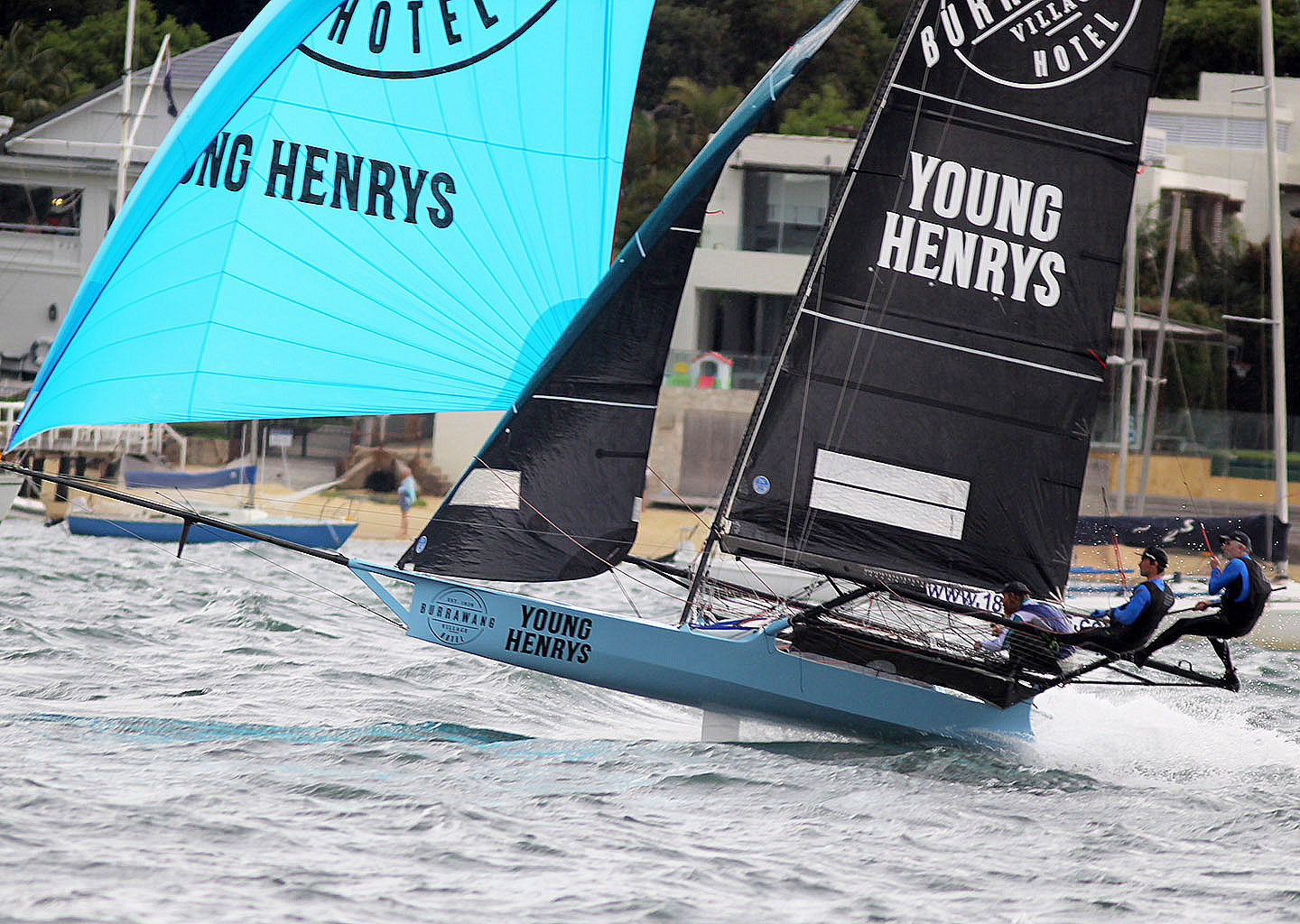 Burrawang-Young Henrys, one of only a few teams to survive the squall without a capsize. Pic - 18ft skiffs 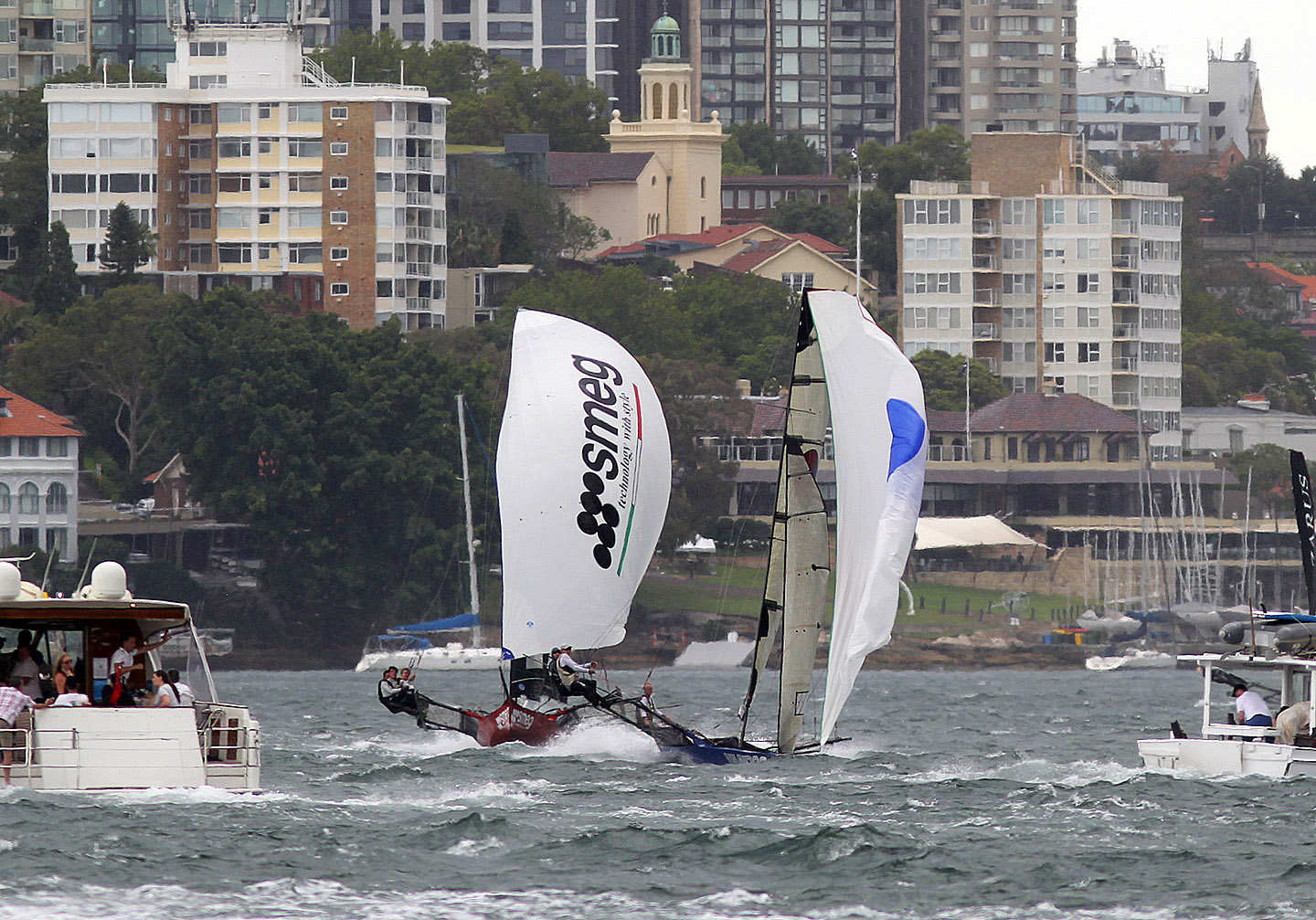 Harry Price’s talent was obvious before he came into the 18s this season as skipper for the long-term sponsor Rag & Famish Hotel.

But it’s still hard not to be surprised by just how quickly the level of his and his team’s ability has been highlighted under very difficult conditions.

The Rag & Famish Hotel team’s high standards already achieved were never more evident than during the recent Race 5 of the NSW Championship when the ‘rookie 18s’ team powered to victory while many experienced teams capsized or retired.

A severe storm hit Sydney on the afternoon of Sunday, December 19, causing major damage across the city, and produced extreme conditions for the teams competing mid-way through the Australian 18 footer League’s race.

The young Rag & Famish Hotel team was one of only a few which survived (without a capsize) when a 25-30 knot squall battered the race course as the fleet was racing downwind on the long leg from Kurraba Point on the northern side of the harbour to the Rose Bay bottom mark in the south.

Current NSW Championship leader, John Winning’s Yandoo had led the race to the top mark at Kurraba Point but Michael Coxon’s Smeg was only metres behind Yandoo as the pair began a short, but incredibly exciting, spinnaker dash at the peak of the squall.

While many Sydney residents suffered damage in the storm, spectators on board the League’s spectator ferry were treated to a close-up look (just metres from the ferry) at action-packed, high-speed 18ft skiff racing by some of the world’s most talented skiff sailors.

Unfortunately for both the Yandoo and Smeg teams their flying spinnaker runs each ended in capsize only metres apart in the middle of Sydney Harbour.

Each crew could then do little but watch as the then third-placed Rag & Famish Hotel sped past them to ultimately go on and win the race.

It was an amazing result for the Rag & Famish Hotel team of Harry Price, Angus Williams and Harry Hall, but the trio is certainly not new to success as a combination, having won the 2018 Governor’s Cup international youth match racing championship together in California.

(A sidelight to the action on December 19 was the fact that New Zealand’s Olympic sailor, Leonard Takahashi, skipper of the team Price defeated in the 2018 Governor’s Cup final, was a competitor in the race as a replacement crew member on the third placed Noakesailing).

The Rag’s victory was made more impressive as Harry Price was having only his first race back in the boat after missing the previous three races following a dislocated shoulder suffered earlier in the season.

Josh McKnight, a regular crew member on The Rag, had been standing in as skipper for Harry during his injury, but was missing on the day of the wild ride due to another commitment related to the Sydney-Hobart race.

Other teams to successfully ride out the squall on the wild ride across the harbour were Noakesailing (Josh Porebski), Burrawang-Young Henrys (Simon Nearn), Fisher & Paykel (Jordan Girdis) and Shaw and Partners Financial Services (Steve Thomas).

With three races in the championship still to be sailed, the progress point scores, after each team’s worst performance so far is discarded, have Yandoo in the lead with a total of 8 points, followed by Tech2 on 9, Noakesailing on 10, Fisher & Paykel 20, Shaw and Partners Financial Services 21 and Rag & Famish Hotel on 24 points.

Racing at the Australian 18 Footers League is in recess over the Christmas-New Year holiday period and will return on January 16 with Race 6 of the NSW Championship.