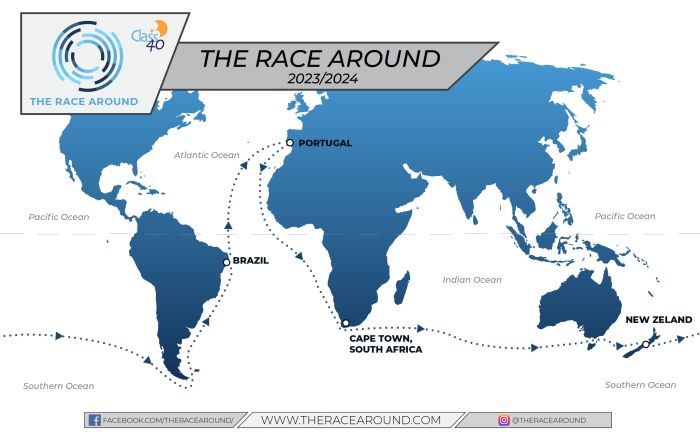 NEWPORT, Rhode Island (July 09, 2019) – Manuka Sports Event Management and 5 Oceans Sports Marketing announced today the beginning of a new era in Class40 racing: The Race Around. The Race Around is a double-handed around-the-world race with the full endorsement of Class40 and it is designed for teams looking for a competitive challenge that will take them on a global race following the 2022 Route du Rhum.

The Race Around will include five stopovers in its inaugural edition. It will begin with a prologue from a northern European city before taking competitors to Portugal, South Africa, New Zealand, and Brazil. The course will feature the three great Capes of ocean navigation and include the challenging Southern Ocean, before returning to the city where it all began.

Starting in late summer of 2023 and run on a four-year cycle, The Race Around’s first edition will allow competitors enough time to prepare their campaigns, and importantly invest time into qualifying for this ocean race. The Race Around is open to both amateurs and professionals provided they qualify under the rigorous safety standards as stipulated by both the Offshore Special Regulations – Category 0 and the Organising Authority’s requirements. The Race Around’s traditional route will provide the opportunity for competitors to join the legacy of sailors who have circumnavigated the globe before them. Organisers believe the race will showcase some of the most talented Class40 sailors, while also providing exciting content for worldwide sports fans.

Spearheaded by yacht racing professionals, Hugh Piggin and Sam Holliday, the race will bring the highest standards of sportsmanship, competitive spirit and excitement to the Class40 event calendar. Hugh Piggin and Sam Holliday are uniquely qualified to produce the Race Around as they bring over 30 years of working with high-level professional race teams and events specifically in the Class40 and short-handed offshore racing arena. In addition to hundreds of thousands offshore miles raced, Hugh Piggin is the co-founder of the Atlantic Cup and Sam Holliday has worked with both IMOCA and Class40 teams on some of the biggest stages.

Hugh Piggin, Event Director, said,“When discussing with both the Class40 Board of Directors and our commercial partners, it was decided that 2023 provided the clearest opportunity within the calendar. Four years allows potential competitors the time to raise funds and pitch sponsors, the time to train and qualify; and for some, the time to build a new boat. When assessing the race calendar, we looked at the placement of the Route du Rhum in great detail and following consultation we believe that the teams we’re looking to attract will prefer to race around the world after the Route du Rhum.”

Halvard Mabire, Class40 President, said, “Should we be satisfied with our sizeable armada of Class40s in the Route du Rhum? In truth, it also shows that we are partially dependent upon one major event which takes place only once every four years. Even though Class40 has a varied and full race program, it is nevertheless obvious that Class40 deserves its own great around the world event, combining adventure with a high level of competition, an event capable of seducing the press, the public and therefore sponsors, so that our skippers can stay in Class40, instead of changing classes because they are attracted by events which Class40 does not yet have.”

Sam Holliday, Commercial Director, said,“Having been involved with Class40 for almost ten years, it’s fascinating to see the continual development and internationalisation of the Class. It has been fantastic to work alongside Class40 in developing this race and we, like Class40, are very optimistic with the interest already expressed from teams and commercial partners. The way in which we’re choosing to run The Race Around allows us the opportunity to create something that goes beyond just one edition and one in which talented sailors from around the world can leverage as a platform to perform on a global scale.”

The primary goal of The Race Around is to create competition on the water, sailing a classical course, supported with a robust communication plan enabling the growth of offshore sailing’s fan base. Rich media distributed through international channels as part of a number of media partnerships, alongside real-time updates from onboard will immerse fans in the experience of racing around the globe and allow students to connect with sailors as they make their journey as part of an educational program.