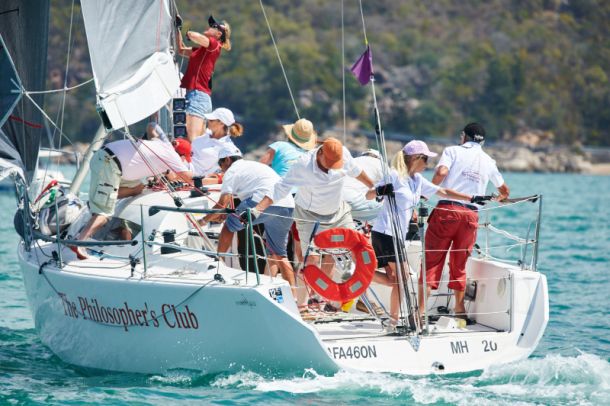 Peter Sorensen and his The Philosopher’s Club have cause for big celebrations today after winning on both IRC and PHS, Race 3 of the SeaLink Magnetic Island Race Week. That win has also moved the Sydney team up to first overall in both divisions, for now.

It’s an exceptional achievement for Sorensen and his crew, including five women. They started today’s race in less than brilliant form, crossing over early. Once they cleared the start line for a second time they settled into the soft north-east breeze and 9 mile course.

“On the bottom leg we pushed over from a symmetrical to a asymmetrical spinnaker which made a bit of difference,” Sorensen said as he recognised his tactician Peter McIntryre. He also grudgingly admitted his women crew did a brilliant job today.

“Considering we broke the start, it was a pretty good effort. It’s been an absolutely fabulous day,” a clearly chuffed Sorensen said.

It was a colourful sight this morning as the boats ran past Picnic Bay where the multihull and cruising divisions sailors were enjoying their lay day at the Townsville Airport sponsored Picnic Bay Fair.

Out across Cleveland Bay to the east channel marker and then back towards the island to the finish line the three Farr 40s were in their own battle; David Currie’s Ponyo just in the lead from Jason Antill’s Komodo and Leon Thomas’ Guilty Pleasures IV trailing behind. Rob Curtis and Glen Tailby’s little Kerazy was hot on the stern of the Farr 40s.

IRC Division leader at the start of the day, Bob Steel’s Quest, found themselves at the end of the day back in second place on equal seven points. Steel suspected that on corrected time they may have been pipped by Sorensen which they were, by just 26 seconds. “We got out ahead and held our lead the whole way. It was a nice steady breeze, just not enough for us. We still sailed well,” Steel said.

In third place on handicap was Ponyo. Guilty Pleasures finished in fourth place. They too crossed the start line early, losing valuable time as they re-crossed and then struggled to find the pace to match the other Farr 40s. On the overall results, they have moved back from equal second to fourth on a count-back from Ponyo.

Berthed immediately beside each other at Magnetic Island Marina, Quest and The Philosopher’s Club, are enjoying vying for dominance in what has been coined the winner’s circle, with Sorensen claiming his team are only now “getting wound up”.

Second place in the PHS division went to the Mike Steel’s Boadicca. The Townsville team with Spirit of Mateship skipper Peter Jones on loan as their tactician, had a beautiful race. “It’s our strategy,” said a jovial Steel. “It was a good breeze for us today.”

PHS Division leader at the start of the day, Kerazy, suffered at the hands of the handicapper, finishing in fifth place which has pushed them back to second overall, just half a point behind The Philosopher’s Club. “We had a clean start, just above Quest. We were then second boat around the top mark.

“This light air we love. We had great boat speed. You know, our biggest goal is just to stay in contact with the Farr 40s. We were able to do that again today,” Tailby said.

Kerazy will be back in the game tomorrow. “We are up for it,” Tailby declared.

Racing continues tomorrow from 11am for all divisions.