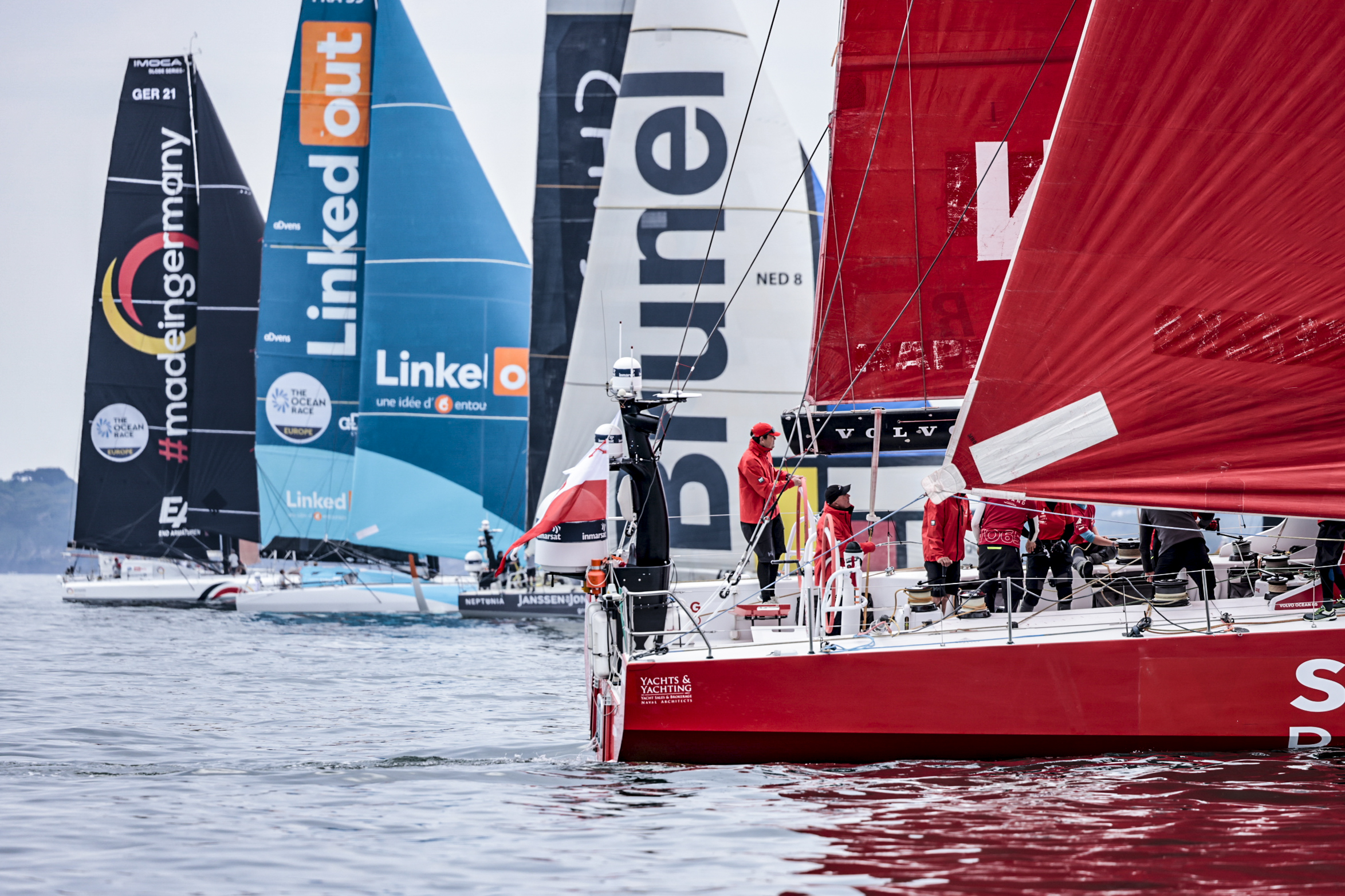 The race from France to Portugal started today - Sailing Energy, The Ocean Race

The inaugural edition of The Ocean Race Europe got underway today with a fleet of 12 high-performance ocean-going yachts setting off from Lorient, France on the opening leg to Cascais in Portugal.

This new three-stage European race has been created to showcase professional fully crewed offshore racing and will see the fleet of 12 teams representing nine countries stop off in Cascais and Alicante, Spain on the way to the race finish in Genova, Italy on June 19.

Conditions at start time were extremely light, with the teams easing across the line with a favourable tide and tacking through a race gate before heading for the open waters off Lorient.

According to Wouter Verbraak, navigator aboard the Dutch Team Childhood I VO65, the light wind conditions at the start could prove critical in determining the running order for the rest of the leg.

“That is going to be a key moment of the race, so we will try to be not too radical and stick with the fleet so that we don’t get left behind,” Verbraak said.

“Then it is going to be quite challenging for the rest of the leg because we are expecting strong winds around Finisterre and onward as we go out reaching into the Atlantic and back. But then the finish is looking very light.

“Like in many ocean races, you need to be good at everything. So, for us, all round performance is what we will mostly focus on.”

The crew of the Portuguese Mirpuri Foundation Racing Team VO65 would love nothing less than to lead the fleet into Cascais – the team’s home port and training base in the lead up to The Ocean Race Europe.

But the team’s skipper, Frenchman Yoann Richomme, confirmed that the crew has its sights on winning the race overall, having had the most pre-race training time of all the seven VO65 teams – but he also made it clear that they were taking nothing for granted.

“The goal has always been to win it, for sure,” Richomme said. “We have been given everything we need to do that. The race is the race; it’s really hard, it can come down to one little mistake.

“We all know that we will make a lot of mistakes – we will just try to make less than the others.”

11th Hour Racing Team’s Swiss sailor Justine Mettraux said she had lots of confidence in the hours of pre-race preparation the team’s renowned British navigator Simon Fisher (aka SiFi) had put for the opening leg of The Ocean Race Europe.

“I don’t think it is going to be easy going out of Brittany and away from Lorient,” Mettraux said. “You have to decide what is the fastest way out, the heading you want to take because you think it will take you fastest out of the light winds.

“SiFi has a lot of experience in all of that and I am pretty confident in what he does, and we will do our best to make the boat go fast. “I think the hard part will be the start and the first few days, then we will see where we sit.”

With near flat calm conditions prevailing at the race start time of 1345 CEST, the race committee set a reaching start towards a short departure gate between two fixed yellow buoys, giving the fleet the best chance of making headway on the tide away from Lorient.

The super light wind conditions left the boats ghosting across the mirror-flat waters off Lorient as the sailors strained their eyes searching the horizon for the next little puff of breeze.

Mirpuri Foundation Racing Team did the best job of extracting themselves from the melee of boats at the start to slowly but sure eke out ahead to lead the 12-boat fleet at the Lorient exit gate.

Later today the fleet is expected to encounter better winds as the crews negotiate the Bay of Biscay on the way towards the northwest tip of Spain at Cape Finisterre.

The crews received a rousing send off from Lorient, where the sailors and race organisers have been operating under a strict Covid 19 protocol designed and managed by Spanish company Quirónprevención of the Quirónsalud group to ensure the safety of the competitors and race staff for the event.

The race start was broadcast to a worldwide audience on The Ocean Race digital platforms, as well as on Eurosport across the continent, in more than 20 languages. Coverage continues throughout the event on both platforms.