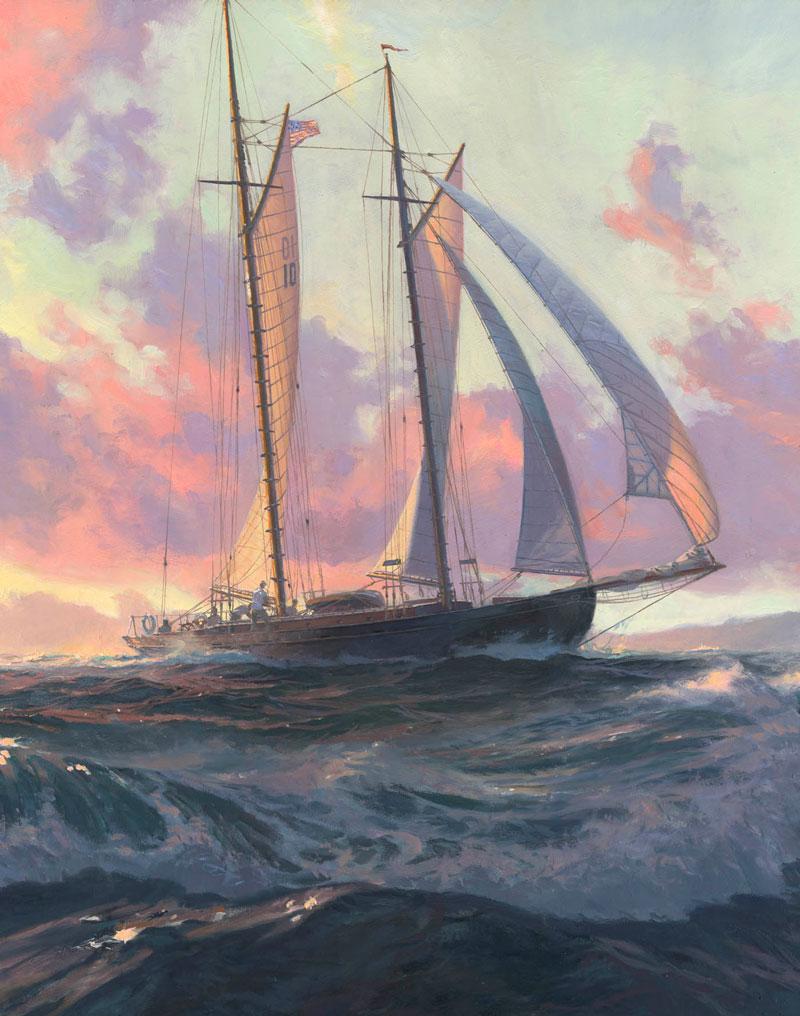 Acclaimed artist Russ Kramer, who specializes in historically-correct dynamic recreations of famous yacht races and turn-of-the-century yachting society, will give a presentation surveying his oil paintings, inspirations, methods and techniques. Russ will focus on the great Herreshoff America’s Cup defenders from 1893-1930 as well as other famous HMC designs such as GLORIANA, and the New York 30-, 40- and 70-foot classes.

Today, Russ Kramer is widely regarded to be among the country’s leading marine artists. His large-scale studio paintings create ‘first-hand’ experiences for the viewer, putting you right on board during some of history’s greatest yacht races or turn-of-the-century luxury vessels. A sense of the dramatic moment, combined with meticulous research and attention to detail, have found considerable appeal and sell quickly into private and corporate collections. His works are unique and immediately recognizable, combining narrative, historical, figurative and maritime disciplines.

Russ has been the subject of a one-man show at the Museum of Yachting in Newport, Rhode Island, appeared in WoodenBoat, Yachting, and Sail magazines, and is prominently represented in the volumes Art and Artifacts of The America’s Cup by Hyland-Granby. He is a fellow and past President of the American Society of Marine Artists.

He has won multiple awards at the Mystic International Marine Art Exhibition, including the prestigious Yachting Award in 2009, 2010, 2011, 2013 and 2017. He is represented by the Maritime Gallery at Mystic Seaport, the J. Russell Jinishian Gallery in Fairfield, CT and the Roger King Gallery in Newport, RI.
Russ lives and works in Mystic, CT.

The lecture is being conducted via Zoom, and begins at 7:00pm (Eastern Standard Time) on Thursday the 22nd of July. For more information and to book, click here: http://form.jotform.com/herreshoffmarinemuseum/lecturetickets