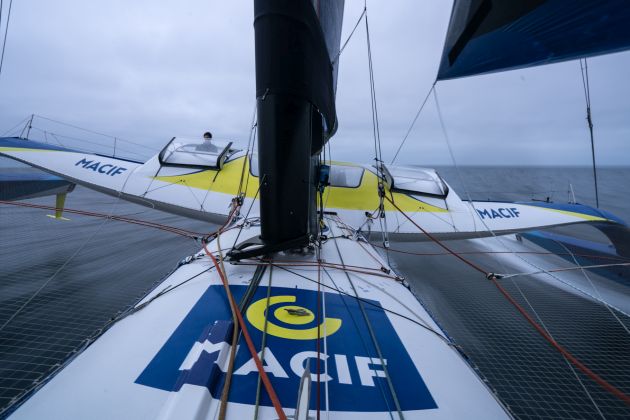 The MACIF trimaran should cross the finishing line of The Bridge in New York, on Monday night (UTC+1), after 8 days at sea. Just under 100 miles from the Big Apple on Monday Morning, the crew led by François Gabart has a 150-mile lead on IDEC Sport and is ideally placed to win this first Ultim only transatlantic race.

After crossing the many high-pressure areas that punctuated MACIF’s route between St. Nazaire and New York, early in the weekend, the trimaran’s crew had to tackle a sudden wind increase to 35 knots and this was physically demanding.

“The wind was south-southwest in a choppy sea. It was the strongest wind of the crossing. We got knocked about a bit and it wasn’t very comfortable”, said François Gabart on Monday morning (Sunday night to Monday for him). It was hard work, since we were in the lead with very little between us and the boat behind. We had to try to find the right balance between sailing to the best of our ability and not taking any risks. It turned out pretty well.”

The wind finally eased up at the end of the day before starting up again during the night on a calm sea, in good conditions for surfing at over 20 knots. “Even though the forecast says we should be tacking, we are heading to New York on a single close-hauled port tack, since the wind is more southerly than anticipated. However, this is not likely to last as the wind will probably drop.”

Finish during the night

With a 150-mile lead on IDEC Sport and less than 100 miles to the finish, the MACIF trimaran is well place to cut the finishing line first on Monday night and win The Bridge. However, François Gabart wisely reminds us that “the race isn’t over until the finishing line is crossed”. Particularly since you need to be careful approaching the American shores: “There are quite a few boats in the vicinity. We have just gone past a fishing boat that didn’t have an AIS (automatic identification system which positions boats in the surrounding waters)!  We were very focussed.”

The skipper is pleased with this transatlantic, which has given the boat and the crew an opportunity to compete with a high level of competition: “We are sailing alongside two of today’s best ocean-racing multihulls, IDEC Sport and Sodebo. The result as I am talking to you is very encouraging! The crew worked well together with lots of interaction and the organisation we had, with frequent rotations on deck, kept the crew fresh and maintained their drive. We never slipped up on trimming. I think everyone has enjoyed the race. I see lots of smiling faces.”

After a cold spell, the heat is on

After encountering a very cold mist in the ice zone, the MACIF crew are expected to enjoy more summer-like temperatures of over 30° C at the finish in New York. Climate change is not without consequences, if we are to believe François Gabart: “In the last 2 hours between the warm Gulf Stream and the cold Labrador current, we have had rapid transitions, changing from very cold damp foggy areas to much warmer areas in just a few minutes. It’s very changeable. What’s more, I nearly caught a cold. I sneezed the odd time!” I hope that the heat in New York will do us good and that we’ll have a good finish in good weather, with a beautiful sunset, like for the English transatlantic (The Transat Bakerly 2016, Ed.)”