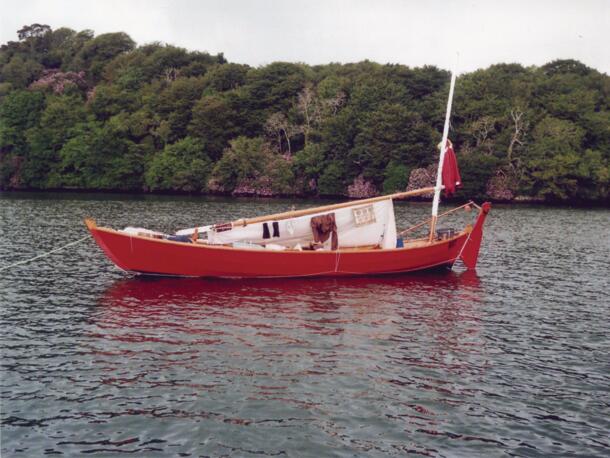 Nowadays most people’s perceptions of using an open boat to sail or cruise offshore, they would assume you are totally mad. Guess I grew up in a different era.

In our teens we were undoubtedly inspired by Frank Dye and his amazing trips across the North Sea, Iceland etcetera in his 16 foot Wayfarer. We cruised our GP14’s along the east coast and managed to cross the Channel.

During my generation, sixty years ago, life was slightly different. Health and safety had not been invented and, with having parents who had endured a world war, perhaps they felt we should take life’s chances.

I am pretty sure Frank Dye would have taken his hat off to ‘em.

Many people might think that Captain Bligh was not a good sailor. Understanding far more nowadays, perhaps his man-management skills were not at Cook’s brilliant level; although he sailed with him on that first great Pacific voyage. We tend to forget after the mutiny on the Bounty. Bligh, with loyal men, sailed an open boat 3,700 miles across the Pacific. An incredible voyage that was, quite recently, re-enacted.

It fascinates me, reading things like this; plus Shackleton’s boat trip from Elephant Island to South Georgia, including the real difficulty of crossing high icy mountains, all in his quest to try to rescue his men left in Antarctica. Stories like this were amazing, this was the stuff of legend.

During my life I have met some special contemporary open boat sailors. Webb Chiles could have sailed his Drascombe long boat right round the world. But, after managing to survive great difficulties in the Pacific, then being imprisoned while sailing up the Red Sea by the Saudis. He finally thought he did not want any fame for rounding the globe.

While chatting to him in English Harbour having a cup of tea on his latest boat many years ago, he was a quiet, normal, modest, fit and laid-back American yachtsman. I asked him why he did not finish his circumnavigation in the Drascombe; he simply explained he had done enough with that boat.

Now in his seventies he has completed his sixth circumnavigation on a production GRP Moore 24 footer.

My friend Robin continues to remain right under the radar. Presently he is sailing his open boat in Scotland; enjoying another year of offshore cruising on the tough west coast. Another quiet sailor who has sailed an engineless 27’ wooden boat across the Atlantic four times; then took her across the Pacific to New Zealand.

Coming back east he journeyed quite far south, calling in at Easter Island, Pitcairn etc. then cruising the western sea inlets in Chile. Heading home via the Beagle Channel and rolling over twice before the Falklands; plus again, off the Azores. Recently his time has been limited, having to look after the family farm as the eldest sibling.

He built an Ian Outread design, which was extended to 22’, in one of his barns. His first sail from Wales was across the Irish Sea; later that summer’s holiday cruise took him clockwise round Ireland. Most of his open boat cruising has been on the west coast; becoming slightly bored he launched her further north at Loch Broom and took her up to the Faroes.

Once skipping back home in strong winds; a lady saw Robin. She thought he was in difficulty and called out the lifeboat. But he had already found a wee bay, anchored, dropped his mast, put up his tent and was making a meal.

Then the RNLI arrived with a big boat and asked him if everything was okay. Due to their embarrassment of this unnecessary shout they persuaded him to accept a tow back to their harbour.

Apparently, he kept them rocking with laughter all night with his amazing voyaging!

Howard hoped to prove that you can cruise around even in a tiny dinghy, he had already sailed a kayak round some years earlier!

Unfortunately, this trip did not work out as hoped after some colossal hurricane force winds. Howard found it was impossible to dig his tiny anchor into massive thick kelp; then, having to stop after several extremely dodgy near-drowning experiences, he almost lost his life.

You can still enjoy some brilliant adventures, even if not quite as crazy as them. Some years ago I was a sailing coach for Oman. There was a good response to sailing, most were interested in racing. Weekends were slow in the beginning: Omani guys needed to be home making all their family decisions and ex-pats were happy enough to go either Wadi Bashing, driving up and down dried river tracks, or just sitting chilling somewhere in powerful air conditioning.

In my downtime though I realised that by using one of my standard Laser dinghies, with a small waterproof backpack, it was possible to explore parts of the Omani coast, beaching and camping overnight. My problems were simple: taking enough drinking water, sunblock, hat, sleeping mat, lightweight body bag and some food. Trying to avoid sea snakes by day and scorpions overnight. Understanding how to use local land or sea breezes was critical.

Most sea breeze often did not kick in until after midday when land temperatures were increasing. Ducking in the sea to try to cool off helped, though it felt like a warm bath.

I was surprised by the distances I could cover while avoiding large sea turtles in seas teeming with fish. Also slowly beginning to be able to identify local birds like the Indian Roller, white Sea Eagles etc. made these trips feel exotic for me.

If afternoon breezes kicked in too hard, or if I got tired, too hot or capsized, it was easy to stop on the long beaches. The onshore sea breeze would blow me in. Remembering to put on my flip-flops; otherwise hot sand could burn your feet.

As I grew in confidence, I would arise early before sunrise to allow marvellous, slightly cooler, sailing using land breezes.

Launching stern first with bows pointing head to wind, it was easy to get away with this offshore breeze. A wonderful way to wake up and start heading back. Friendly generous fishermen and local village people, given my lack of well-spoken Arabic, helped give me some understanding of the culture.

With a tiny bit of lateral thinking, wherever you are based, you can find a way to have a short or big adventurous break; whatever your type of small open craft. ≈