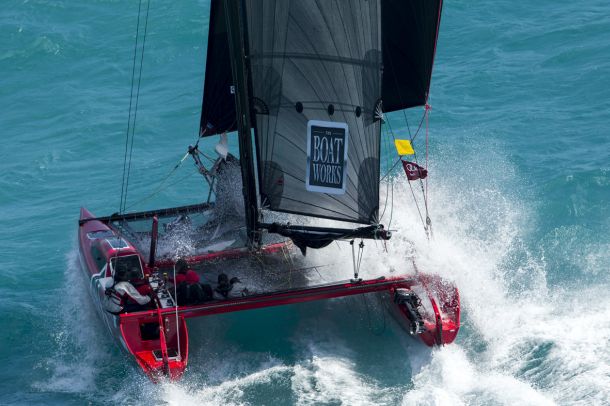 Most Hamilton Island Race Week regulars know the weather gods have lulled its fleet into a false sense of security over recent years. For almost five years, day one has gifted crews a quiet introduction to the regatta; head out into Dent Passage, hoist your largest spinnaker and glide down Dent Passage.

This year’s Race Week started with a bang. Class after class headed downwind at handsome speeds and more than a few crews in the IRC and Cruising divisions ran a very fine line between controlled speed and a major round-up, when boats ended up on the wrong side of the wind versus tide equation.

For the many sailors from the southern states who take a break from racing for much of the winter, Race Week’s day one conditions proved a rather rude awakening. But for one section of the fleet, maintaining control seemed deceptively effortless.

The 40 multihulls that make up two divisions of cruisers and racers at this year’s regatta are as varied as the crews that sail them; but whether a luxurious live-aboard or a wiry turbo-charged flyer, all multihulls share one trait not found on a monohull – life is lived on the level.

Be it racing at 20 knots or cruising at 5, a multihull’s mast rarely passes twenty degrees from the vertical, and that’s a large part of the appeal for many in the growing multihull community.

“Let me demonstrate” said his crew mate Paul as he moved to the helm position. “Ready to tack”, he said, placing his beer bottle on the seat beside the helm and steering the wheel through a simulated tack.

Completing the ‘tack’, picking up his bottle and taking a swig Paul quipped “Beer’s still there. Won’t find that on a monohull!” he added with a smile.