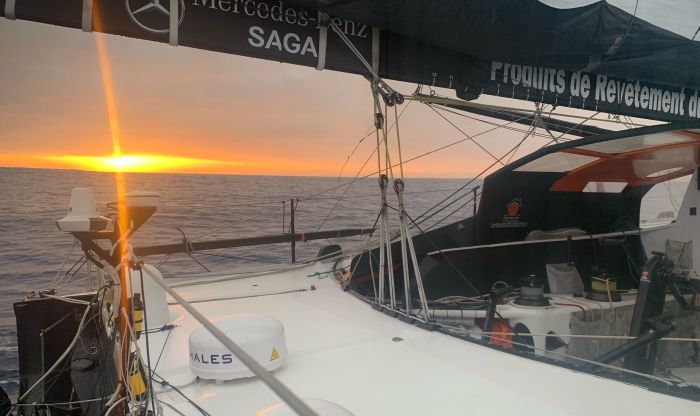 Each Tuesday, Thursday and Saturday, the IMOCA class gives a chance for the weather analysts and onshore routers to tell us about how they see the race in the IMOCA category to allow us to understand the strategy adopted by the sailors and their positions out on the water.

Today, it is Dominic Vittet’s turn. The winner of the 1993 Solitaire has been advising skippers for 25 years on their strategy and weather analysis. Dominic has been the router for many skippers in Figaro, Class 40, Tour de France, Route du Rhum, Transat Jacques Vabre races and during major record attempts such as Gitana’s voyage around the world. Here is what he told us about the state of play on Thursday 31st October in the Transat Jacques Vabre. In particular, he looks at the two options taken to go west and south.

“When the boats left Le Havre last Sunday, there were two possible options. They were not definitive, as there was a great degree of uncertainty about how the low pressure system out to sea would evolve. Its trajectory differed from one model to another. The double-handed crews which had not yet taken the decision about what they would do, had to make a choice when they left the Bay of Biscay about whether the low was going to be violent or not and if the gateway to downwind sailing to the south of Portugal was going to open.”

Advantages and drawbacks with the westerly option

“In general, when you sail down towards the Equator and the Doldrums, it is worth sailing off to the west. You have to accept that you will lose some ground initially, but believe that you will make up for that later. The IMOCAs that chose that option 48 hours after the start (like Hugo Boss, Maître CoQ, Prysmian Group, Malizia and Advens) believed that by investing in a westerly route they would end up winning. We should add that two new boats (Hugo Boss and Advens) took that option, which was likely to inflict rougher weather on them and upwind sailing. They should be congratulated on taking that risk. Those that opted for the west are continuing to invest in their future, sailing on the port tack in strong winds. They hope that beyond these gales they will be able to make the most of a shift to the WNW to speed along on the starboard tack at higher speeds.”

Advantages and drawbacks with the southern option

“The competitors that headed south took an option that was not so boat-breaking, sailing downwind and closer to the direct route, with some thinking that they needed to finish in order to be selected for the Vendée Globe. The IMOCAs in the south are currently extending their lead. They have accelerated downwind. Their huge lead should increase still further until tomorrow morning. The area of calm associated with the high pressure system is not looking as tricky as first thought. But there are two problems with this southern route. The wind is not very strong to head down to the Canaries. They are going to have to get across that area before the calms establish themselves late this weekend. On top of that, those that have chosen the southerly option will need to move off to the west to get through the Doldrums, which have spread right out. They are going to have to sail downwind with a lot of gybes required. At that point, those out to the west will be sailing at decent speeds.”

“The verdict in three or four days”

Will the group out to the west be able to make up for their losses and get ahead? That is the big question today. We will have the final answer to that question in three or four days from now, when their routes converge towards the Doldrums. Everything is still very open and we should not write anyone off just yet. IMOCAs are very fast and such gaps can quickly melt away. If the competitors out to the west manage not to be too late in catching the wind shift to the WNW, they will be in with a chance. If that does not happen, the distance to catch up will be beyond their ability.”