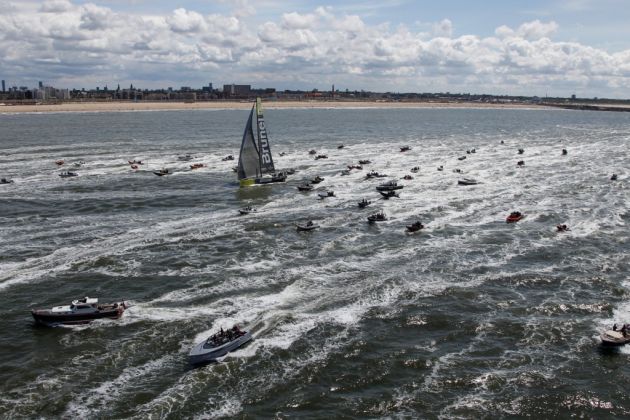 Brunel arrives in The Hague during the lat edition of the race. Photo Victor Fraile / Volvo Ocean Race.

THE HAGUE, Netherlands, March 23 – The Hague, scene of an enormously successful pit-stop last year, has been chosen to host the finale of the Volvo Ocean Race 2017-18. The Dutch stopover will be preceded by a midsummer stopover in Volvo’s home city of Gothenburg, setting up the crucial last leg to the Netherlands in June 2018.

The race’s outgoing Dutch COO, Tom Touber, announced the climax to the 13th edition in Scheveningen harbour at a press conference in The Hague on Wednesday.

“Today is a great day for sailing in general, but even more so for the Netherlands. It’s wonderful that the finale of the 2017-18 race will be staged in a city so close to my heart, with such a rich heritage of ocean racing,” he said. “The Hague has certainly earned this honour: The pit-stop in the previous race last June was one of the highlights of the entire event, with huge numbers of fans attending, plus great media and a long list of VIP guests.

“I am bowing out shortly to pursue some exciting new challenges after nearly five and a half years, but this feels like the crowning moment of my time working for the Volvo Ocean Race organisation. I can’t wait for a truly great spectacle in Scheveningen. It will be the party of a lifetime.”

Touber headed the winning ABN AMRO (2005-06) campaign and also Delta Lloyd (2008-09), which were both launched from the Netherlands.

During the last edition of the ocean race in 2015, The Hague was a host port for the first time. This was celebrated with a three-day festival. Around 150,000 people came to see the boats and the stage performances of many well-known artists.

The city’s Deputy Mayor and Alderman for Economic Affairs and Harbours, Karsten Klein, added: “Scheveningen harbour is an ideal spot for sailing professionals from all over the world. Something we were able to clearly demonstrate with last year's pit-stop. We also have a great deal of experience of organising major events, such as the Hockey World Cup and the Beach Volleyball World Cup, But the finish of the Volvo Ocean Race really is a major accolade for our city. It is the biggest sports event that we have ever organised in The Hague.”

Gothenburg city officials were equally delighted with their key spot in the Volvo Ocean Race 2017-18 schedule, with the stopover likely to be several days longer than in June 2015 depending on arrival times.

City Mayor, Ann-Sofie Hermansson, said: “In Gothenburg, we are proud to be the sailing capital of the Nordic countries and to be Volvo's home town. Therefore it is very exciting to welcome the yachts in the Volvo Ocean Race back. All visitors to the Free Port will see an area that is evolving and changing very much.”

CEO of Göteborg &CO, Camilla Nyman, added: “By being a stop, it becomes a more spectacular sailing event with both an arrival and a departure this time to excite local fans.”

“Gothenburg, Volvo's home town, is one of the most important ports in the event's history and a highly regarded member of the Volvo Ocean Race family,” said Antonio Lopez Bolanos, acting CEO of the Volvo Ocean Race. “The city did a fantastic job in 2015 to host the finale of the 12th edition when hundreds of thousands of fans visited Gothenburg Race Village. We are really looking forward to arriving back in Sweden in June 2018 for the final exciting chapter of our competition.”

The 13th edition of the world’s toughest offshore race will begin in Autumn 2017. Alicante, Spain, the race’s headquarters since 2010, will be the departure port.

Further port confirmations will be made in the forthcoming months with Newport, Rhode Island and Cardiff already announced.