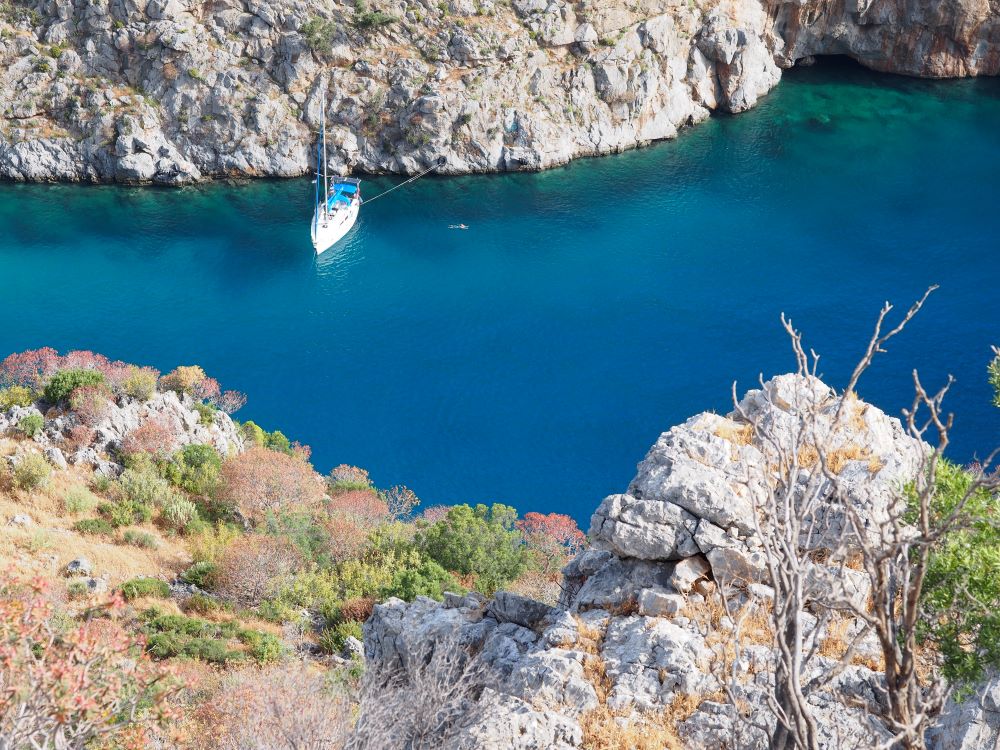 “Dodeka” in Greek means “twelve” in English and there are 12 islands in this island chain that parallels the adjacent west coast of Turkey. Close together, they provide protection from the summer meltemi wind and create short sailing legs for Mariner Boating's Aegean Rally.

First stop for the rally is Arki where we listen to our host Manoli’s “music from around of the world” while we enjoy slow-roasted goat in a tomato sauce in his taverna. Here we overlook the quay at the head of the mysteriously named Port Augusta. We later learn that Augustus Caesar was incarcerated here a couple of thousand years ago! I could think of worse locations for a prison.

Patmos is the spiritual headquarters of the Greek Orthodox Church, saved from mass tourism by its lack of an airport. The 11th.century monastery overlooks the sea port that provides the only access to this spectacular edifice.

The lay day sees the rally crews indulging in individual land borne excursions. One on one contacts with the locals provide personal encounters that set them apart from the bus borne masses disgorged from the visiting cruise ships anchored in the passage, which almost cuts Patmos into two separate islands.

Before departing on the twilight sail to Lipsos, the group travels as a whole to a bay called Lampi, where the only taverna, run by Katerina and her son Pendelis, offers the very best seafood. The fresh catches of the day are accompanied by fresh vegetable dishes based mainly on what Katerina produces in her adjacent garden. The day is immaculate, with the temperature in the mid–twenties, the sky a clear, clear blue and the crystal sea a comfortable 23 degrees Celsius.

Lipsos boasts 55 churches, several rare white sand beaches and the Calypso restaurant run by local magnate Nicholas ,with whom we enjoyed an hour long Q&A on the plight of Greece in the global scheme of things. More personally, he also reveals the dilemma he faces with his teenage children, whose prospects in Lipsos, or even Greece, are tempered by a meagre island economy and a national debt running at 130% of GDP. Nicholas expresses his desire in life as being to provide the excuse for his children to remain in Lipsos. He runs a trucking business, grows much of the produce used in his restaurant in his own garden and owns the Calypso hotel that overlooks the quay in the only harbour. In the summer, he works seven days a week in his magnificent restaurant, which in season employs 30 people.

The next leg to Vathi on the island of Kalymnos sees a swim stop at anchor behind a rock along the way before the fjord-like entrance to the tiny port. The rock-climbing goats cast just a casual glance at us as they scale the cliffs on both sides of the entrance. Sylvia, who owns and runs Poppy’s Taverna, where we indulge in yet another sumptuous dinner, opens her arms in a heart-felt welcome. This welcome has come every year since the Aegean rally first came to Vathi 35 years ago.

As usual we have live music to accompany dinner, and during the opening number our Turkish technician Metin informs me that the song is Turkish not Greek. “Do you know it,” I reply. “Of course,” he says. “Will you sing it?” I ask. Metin later sits with his guitar in front of the two Greek musicians who accompany his Turkish rendition of a song that in fact has Armenian origins. A pin drop would have been loud as the breathless audience marveled at the modern reality of peaceful coexistence in this troubled part of the world.

Next morning, Sylvia rides her motor scooter to the quay side, dives fully clothed into the roped off swimming area, swims two laps of the pool and then returns dripping to her restaurant for her day’s work.

The crews take off on their own excursions to return with overjoyed accounts of their encounters in the main town of Kalymnos and in the north – where spectacular escarpments attract rock climbers from all over the world. Kalymnos has a long history of association with Australia, where the demise of the Greek sponge fishing industry in the 50’s saw many Kalymnians leave for Darwin, Melbourne and Sydney. Many of them have returned over recent years to reconnect with their culture and their island. Who would blame them?

The Aegean Rally, this year called the Mediterranean Escapade, will run in May-June 2020 and there is just one cabin left in an all-catamaran fleet. Call Mariner Boating on 02 99661244 or visit www.marinerboating.com.au.