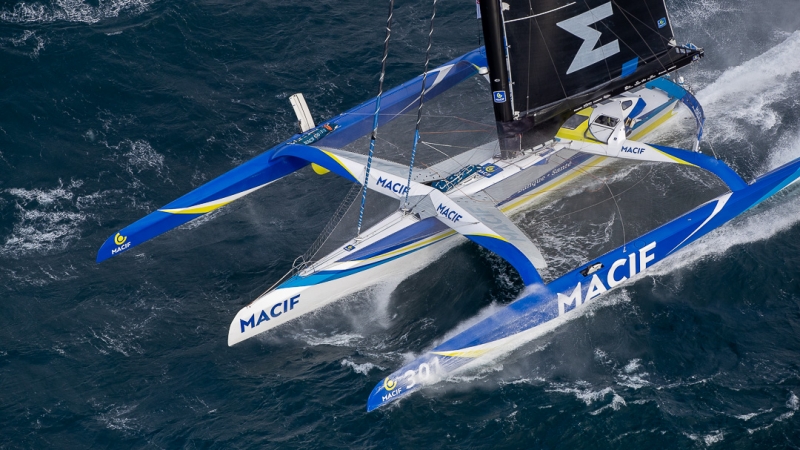 While Maxi Edmond de Rothschild is now on track to reach Brest next Wednesday, the battle for second place is well and truly on between MACIF and Actual Leader. With only around thirty miles separating them, it looks like it will be a close call all the way to the finish line.

In the lead since 14th November, Maxi Edmond de Rothschild now has just over 1500 miles to go. Franck Cammas and Charles Caudrelier are expected to arrive in Brest on Wednesday morning at the earliest, and in the afternoon at the latest.

“They're going to advance behind the high that is heading north towards Europe. They won’t encounter too much wind until the very end, where it will be at most 20-22 knots, and blowing in a southerly direction that will soon change towards the east. These are ideal conditions for them to finish in,” analyses Christian Dumard, the weather consultant for Brest Atlantiques.

With a lead of now more than 800 miles over its rivals, which coincidentally is more than half the distance they have left to cover, the next target for Maxi Edmond de Rothschild is to reach the Azores archipelago on Monday. After crossing this point, the two skippers will then embark upon the final 1000 miles back to Brittany, while still preserving their trimaran as best they can.

Behind them, MACIF and Actual Leader will no doubt be fighting it out for second place until the very end. Since yesterday, both trimarans have been sailing in a north-westerly direction.

“They're going to look for the next weather system, sailing as much towards the west of the approaching high as they can. This means they won’t necessarily be heading straight up north,” explains Christian Dumard, who believes that these two trimarans will come into contact at the beginning of next week.

“MACIF will arrive first, to the south of the high, but will slow down considerably on Monday and Tuesday, so the gap will then tighten between them and Actual Leader. I think they’ll actually be very close to one another in two days’ time, and probably even see each other at some point.”

So, the race is certainly on for these two trimarans until the finish line in Brest, where they are expected to arrive between next Friday and Saturday. It remains to be seen in what order…