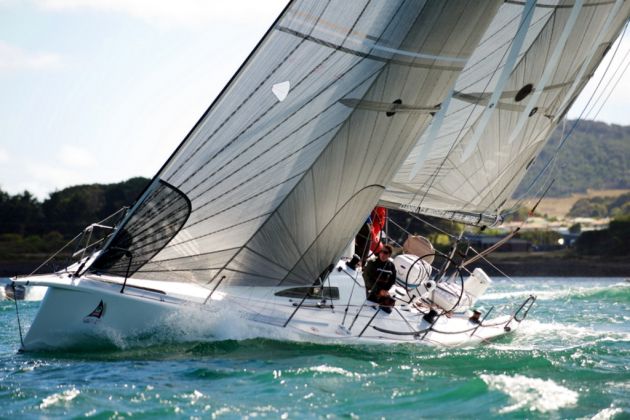 Hobart yachtsman Gary Smith is quietly confident he can emulate, or at least again achieve his sailing successes of last summer, by taking line honours for the fourth time in Tasmania’s longest offshore race, the Launceston to Hobart.

Over the season of 2013-2014, he sailed his ocean racer, The Fork in the Road to line honours victories in every long race he contested around the Tasmanian coastline, setting a race record for the Launceston to Hobart and winning the coveted King of the Derwent on corrected time.

Smith also became the first yachtsman in years to be inducted into Tasmania’s Sporting Hall of Fame, recognising his success in designing, building, sailing and dinghies at the state, national and international level as a young man.

His sailing successes in winning a world championship in the Fireball class and 1988 Olympic representative at Seoul Games sailed off Pusan.

So far this summer, the Fork in the Road, a Bakewell-White 45, New Zealand-designed but Tasmanian-built and fitted out, has had to play bridesmaid to the powerful and bigger TP52 Cougar II.

This month Tasmania’s two fastest yachts have gone their separate ways, Cougar II contesting the Rolex Sydney Hobart, The Fork in the Road lining up for her sixth National Pies L2H.

The Fork in Road has taken line honours four times, the last three consecutively and breaking the record with a time of 1 day 12 hours 48 minutes and 35 seconds in the 2014 race.

“It has a square top which is good for rating but also will lift the boat’s performance on a reach,” Smith said yesterday.

“We have done quite a lot sailing in the lead-up to the L2H, not only the offshore races and night races but also the Combined Club long day races to give the crew plenty of action in both night and day sailing,” Smith added.

Smith describes the 285 L2H around the rugged north-east and east coastlines of Tasmania as a difficult race to win, with the hazards that included the Banks Strait, the Mercury Passage inside Maria Island, and finally rounding Tasman Island and crossing Bass Strait.

“Traditionally, the L2H has been a downwind race…we have never had it hard on the wind coming down the east coast…but it can require good seamanship in Banks Strait and in rounding Tasman Island,” Smith added. “We don’t won’t a tap on the shoulder like we got in Storm Bay two races ago, in which only seven boats finished.”

Smith described The Fork in the Road at a good all-round boat, capable of good boat speed to windward and capable of surfing downwind. “We’ve carried a kite in 40 knots, hitting 25 knots, but that’s sailing on the edge.”

The ninth edition of the National Pies Launceston to Hobart race starts from Beauty Point on the Tamar River at 1.30pm next Sunday, December 27, with a current fleet of 29 boats, including one Victorian.