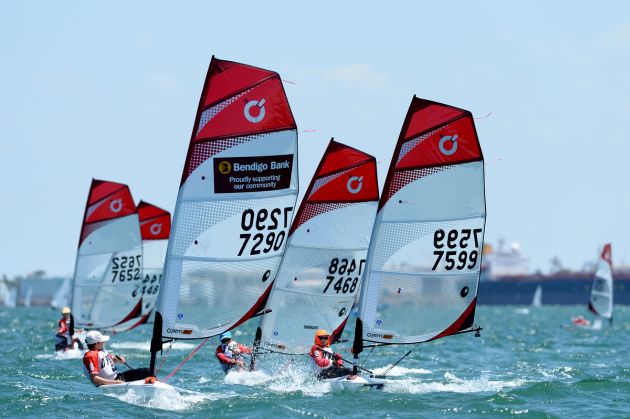 Most families start winding down for the holiday season but for O'pen Bic families around the world this is just the beginning. 125 competitors from nine nations have already registered for the 2015 O'pen Bic World Championships set to begin this Sunday, 27 December, at the Safety Beach Sailing Club on the Mornington Peninsula.

The international O'pen Bic dinghy contingent has grown substantially over the last three years with well over 7000 boats now being sailed competitively worldwide. In Victoria, the O'pen Bic is part of Yachting Victoria’s Youth Program and internationally is accepted as a competitive Junior Class next to the Optimist Dinghy.

A large contingent of the 125 competitors are becoming well-versed in the Port Phillip bay waters with 29 O'pen Bics competing at the recent Sailing World Cup Melbourne and 44 boats competing in the Pre- Worlds regatta held over the weekend.

“The O'pen Bic Worlds has been years in the making; we put the bid in Travemunde last year and were very excited when we were selected. We are proud to be the first O'pen Bic World Championships to be held in the South Hemisphere.

“I’m happy to see the growth in Australian competitors over the past three years and look forward to seeing how these World Championships go.”

As an added bonus to the World Championships a fleet of 18 foot skiffs will be coming to the event on the 27th December. These skiffs will provide an opportunity for a few lucky young sailors to jump on- board with an experienced crew and discover what it’s like to sail one of these dinghies. This is a great way for the junior and youth classes to connect and engage with sailors in high performance boats.