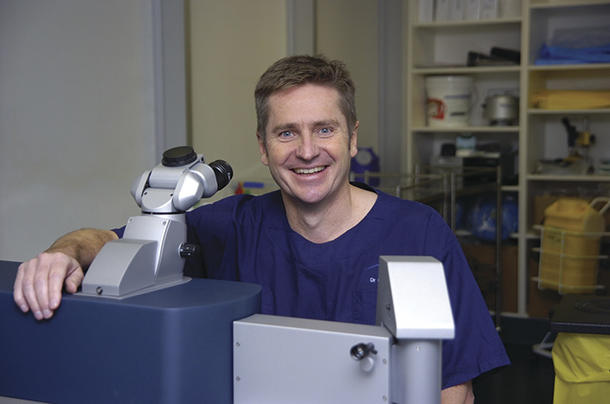 The human eye is exposed daily to ultraviolet radiation (UVR) with the main source our sun.

Despite information campaigns, the general understanding of sun-related damage remains minimal at best. The aim of this short review is to highlight some of the ocular conditions that may occur through UVR exposure and what can be done to minimise the risk or indeed treat these conditions.

The UV spectrum can be broken down further into categories or bands: UV-A, UV-B and UV-C.

UV-B and UV-C are almost entirely absorbed by the globe's ozone layer. However, most UV-A radiation passes through and therefore may be absorbed by the structures of the eye. Importantly, direct sunlight only partly contributes to the overall exposure; scattering and reflection may contribute as much as 50 per cent of ocular UVR exposure.

Scattering is increased by clouds and haze (pollution) suggesting that precautions should be undertaken regardless of the weather.

Reflection is dependent on the surface and remains relevant even when facing away from the sun. Ground reflects UV at approximately two to five per cent whilst the open water averages between 3 to 13%. Snow or ice remains highly reflective for UV at 94%.

Of particular interest, a recent Japanese study found that ocular exposure was greatest in summer between 8am and 10am in the morning and 2pm and 4pm in the afternoon. Both times falling outside the traditional time considered highest risk for UV skin damage and again highlighting
the need for vigilance at all times.

UVR and the eyelids

BCCs are responsible for the majority of eyelid cancers. Patients with BCCs most commonly notice a reddish nodule slowly forming on their eyelid.

Most commonly these appear on the lower eyelid and close to the nose. Patients with SCCs can have symptoms that range from the appearance of a flat reddish or flaky growth on the eyelid to a thickened well-demarcated raised, reddish tumor surrounded by an inflamed area. Both tumours can be removed surgically and rarely metastasize, albeit close observation is mandatory.

There is strong evidence to suggest that the development of SCCs can be attributed to extensive sun exposure over time. The risk of BCC is less well understood, however evidence suggests that a person is up to four times more likely at risk of developing a BCC if they had significant exposure under the age of 20. These outcomes have been replicated in several countries across the world and stress the need for protection for young people routinely undertaking outdoor activities with high exposure risk.

Pterygiums appear as a fleshy, vascular tissue that appears to grow across the eye with time. Sun exposure, wind and dust may aggravate the condition leading to a consistent red, ‘angry’ appearance. Although the exact cause of pterygium remains unknown, there is a significant link to outdoor work and both UV-A and UV-B exposure.

Location appears also to play a role in the development of the condition with a high prevalence of the condition occurring in the band between the 37° north and south latitudes. This would suggest that people spending significant time throughout northern Australia, particularly during early life, will be at significant risk of developing the condition.

Pterygiums are commonly found near the nose and spread across the eye; albeit they also occur from the outside or lateral aspect in a small minority of cases. Depending on design, sunglasses may not effectively block these rays. Ideally wrap-around sunglasses should be worn to reduce the total exposure.

Once pterygiums grow across the cornea they may impact the patient visually by distorting the corneal shape or, in significant cases, covering the line of sight.

The decision to surgically remove the pterygium will be made in consultation with your ophthalmologist and will be dependent on the size and degree of irritation. Early techniques of removal, whilst initially successful, often had regrowth rates beyond 50%.

Radiation at the time of surgery reduced this significantly, albeit at
the risk of longer term complications.

More recently, once the pterygium tissue is removed, a transplanted section of the patient’s own conjunctiva (protective tissue that is located upon the white part of the eye) is glued in place over the nub of the pterygium. This has dramatically reduced regrowth rates to approximately one to two per cent.

Much in the way the skin can be damaged from an acute exposure to UVR, the eye itself can suffer from ‘sunburn’. This is called photokeratitis and represents a superficial burn of the outmost layer of the eye.

The condition commonly appears about six hours following the acute exposure and resolves relatively quickly over the following 24-48 hours. The patient may have symptoms as mild as general eye grittiness and excessive tearing or marked light sensitivity and intense localized pain.

In severe cases swelling can lead to a temporary drop in vision.

The condition may be caused by both natural and artificial light. The condition is routinely called snowblindness on the account that it occurs due to UV-B reflectivity during skiing.

Excessive time without UV ocular protection on the water may also lead to an episode. Artificially, photokeratitis may be caused by intense exposure to UV-B or UV-C radiation (welder’s flash). Treatment is usually artificial lubricants and rest unless the episode is marked.

The lens and the retina

Cataracts represent the main cause of reversible blindness in the world.

A cataract represents a clouding of the natural lens which is situated inside the eye. As the cataract develops the patient may notice increasing glare symptoms, reduced contrast and colour vision and
a decrease in correctable vision.

A further study found that wearing UV protection from a young age reduced the risk of cataract by approximately a quarter compared to those who began wearing glasses after age 40. Wearing a wide-brimmed hat, UV-B protecting sunglasses and avoiding optimal UV exposure times are powerful primary interventions against early onset disease.

Positively, cataract removal represents one of the most successful medical interventions and excellent visual outcomes may be achieved with surgery. The procedure involves preparation of the cataractous lens with laser before removing it manually and inserting a new, clear artificial lens which is appropriate to the size and shape of the individual’s eye.

Recent technological advances offer lenses which can reduce the dependency on optical aids following surgery providing clear vision at near and far distances. Although this would propose an obvious advantage to sailors, the decision to proceed with this technology should be made in consultation with your specialist and according to your individual needs.

The retina (back of the eye) is essential to processing vision and damage may result in significant, irreversible vision loss.

As stated previously, the majority of UV-B radiation is absorbed by the natural lens thereby limiting the potential damage to the retina itself. Accordingly the contribution of UVR to retinal complications remains undetermined.

As the natural lens and, therefore, defence against UV-B radiation is removed and replaced by a clear lens it has been proposed that this may lead to an increased risk of retinal exposure. The relative risk for retinal damage has been estimated at between two to five times higher in patients with an artificial lens.

The introduction of blue light blocking intraocular lenses has appeared to ameliorate the risk. Regardless, UV-B protective glasses remain essential with all outdoor activities at all times of the day.

Avoidance of UVR exposure remains the most effective form of protection however, particularly for sailors, this remains a fanciful option.

There are a number of steps a patient can take to minimise UVR related issues. Hats with a wide-brim are helpful in reducing direct exposure, but ambient light remains a concern. Effective UV blocking lenses for those patients requiring prescription glasses or equivalent sunglasses are essential at all times of the day, even when sailing against the sun.

The likelihood of extended exposure with sailing demands further consideration to the style of glasses worn. Depending on the characteristics of the frames and the distance the lenses sit from the eye, it is possible that the sunglasses may only block less than half the ambient UVR.

Recent studies have also indicated that the back surface of the sunglass lens itself may reflect an additional 25% of ambient UVR further increasing the risk of ocular damage. Wrap-around style glasses remove this concern although more recent innovations include an additional back-coating on lenses.

There has been a considerable industry push to establish a comprehensive eye-sun protection factor (e-SPF) along the lines of the standard sunscreen SPF protection. Taking into account frame coverage, UV transmittance and reflection this should help provide the public with a clearer guide when choosing the optimal eyewear.

For those that may have acquired sun-related ocular damage, regular contact with your specialist is essential. Surgery may be indicated in marked cases.

In summary, longer lives and an increasing enthusiasm for outdoor leisure activities are raising our risk of both acute and cumulative UVR exposure. Extensive research has shown that the eye remains at high risk of developing UV-related damage. For the average sailor, these risks may be exaggerated by the length of time outdoors.

Appropriate protection at all times and under all weather conditions can make a significant difference.