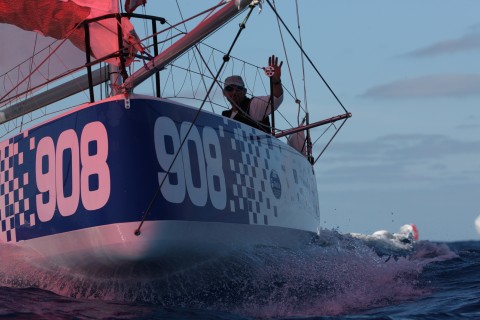 Start of leg 2 of the Mini Transat. Photo © Christophe Breschi .

Naturally there was a fair amount of emotion at the start of this second leg of the Mini Transat La Boulangère. Indeed, you’re unlikely to set off across the Atlantic for the first time without a little apprehension and even the old-timers knew that they were heading off for at least two weeks given the weather conditions forecast and the change of course via the Cape Verde islands.

It was Marc Miro Rubio (Alfin), who was the first to leave the pontoon in Las Palmas aboard the only Pogo 1 of the fleet, whilst David Allamelou (Boréal) led the way in the prototype category, both followed by a procession of solo sailors filing out of the Latina Vela marina. For the first-timers whose backs were against the wall, they tried hard to disguise their apprehension, whilst the more experienced sailors were inevitably a little more detached. The biggest cheer unquestionably went to Marta Guemes (Artelia), the local of the leg. In a concession to modern times a number of competitors fired up their little Go-Pro cameras to ensure they remember every detail of their Mini experience, starting with the images of the friends they are leaving behind them.

Out on the water, the wind shifted round to the ENE shortly before the start. As such, on crossing the line, most of the solo sailors promptly hoisted their code zeros, whilst the more daring amongst them went straight for the large spinnaker. Slightly to leeward of the start line, Ian Lipinski (Griffon.fr) followed by Jonathan Chodkiewiez (Tasty Granny), Gauthier Enguehard (Facet Ingenierie) and Quentin Vlamynck (Arkema 3), quickly moved up to the front of the fleet. In the group to windward, Arthur Léopold-Léger (Antal-XPO) got the better of the fleet of production boats led by Yannick Le Clech (Dragobert) and shadowed by Ambrogio Beccaria (Alla Grande Ambecco), Clarisse Crémer (TBS) and Erwan Le Draoulec (Emile Henry). To leeward, Pierre Revol (Maribambelle) extricated himself from the masses to position himself at the front of the fleet. Little by little, the spinnakers filled as the wind lifted. The long descent southwards has begun.

Once the island of Gran Canaria is behind them, the fleet will be tasked with making its initial tactical choices. The general trend is likely to involve pushing along on port tack as far as the coast of Africa. However, once they get close to the shores of Mauritania, the racers are split on how to tackle the next section. Certain routing options recommend playing with the effects of the headland by linking together a series of manœuvres under spinnaker, at times under the cover of darkness. This route is somewhat hazardous of course, given the increased risk of encountering the local fishermen, who may prove to be intrusive.

A number of competitors admitted that they were keen to head further offshore the minute they hit the steadier winds forecast. Accepting that you are likely to lose a bit of ground in order to reduce the risk at the start of what promises to be a long leg is not necessarily a miscalculation…