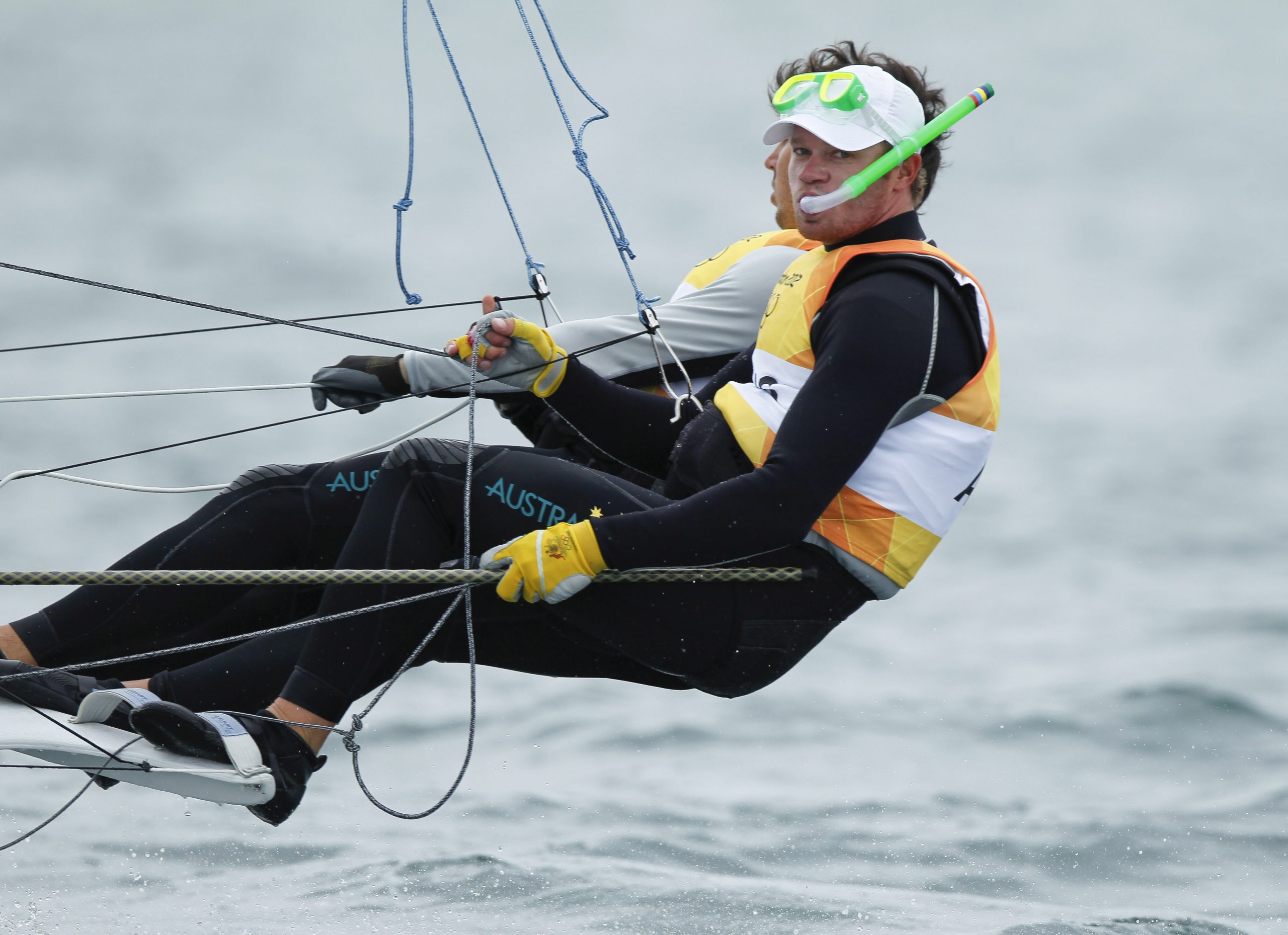 After capsizing while leading a qualifying race

A small British pub, The Cove House Inn, was transformed into a little piece of Australia at London 2012 and turned into the focal point for the nation’s most successful sport at the Olympiad.

Australian sport, in general, suffered at London 2012. The Australian Olympic Team hauled in 35 medals, their lowest since Barcelona 1992. They only won seven gold medals. But as the swimmers, rowers and cyclists suffered, the sailors flourished, winning three of the seven in Weymouth and Portland.

At the heart of the Australian Sailing Team was the Cove House Inn which, as their website says, is a ‘Pub at Chisell in Portland and offers a friendly, cosy atmosphere with the most spectacular views Portland can offer.”

The Australian Sailing community had a huge presence in Weymouth and Portland and had done a deal with the pub to turn it into a home away from home. It was the place where friends and family gathered to discuss the day’s sailing, meet old and new friends and after medal preparations, celebrate hard and long into the night.

Every Australian received a rapturous reception in the evening of the triumph and they all have fond memories of the pub.

“It was a very special couple of weeks,” smiled Outteridge. “We were the stand out sport. What was amazing was the amount of support that came from Australia. Friends and family flew across the world to cheer us on. The memories of being able to celebrate with them as all the medals that kept being won was something special.

“The Cove House Inn will probably never be the same after what happened there that week.”

Outteridge’s room-mate and compatriot Page added, “It wasn’t just a house for us, it was a home. When you’re in another country you want a place to be at your best and the Cove House Inn was where we felt comfortable to find our rhythm.

“Little Nath and Goobs were great friends for many years. They used my home in Sydney as a place to move through the junior classes and into the senior ranks so we knew each other well. Nathan was my room-mate for London and Beijing so we had a lot of history together.

“It was very rewarding to see them realise their dreams as the old salt of the team.”

For ‘Little Nath and Goobs’, as Outteridge and Jensen are affectionately known by Page, the atmosphere around the whole sailing team was vital as they stormed to gold in the 49er.

Heading into the 15th and final fleet race, Outteridge and Jensen had done the mathematics and knew that they could seal the deal in advance of the Medal Race. “Nothing fancy happened for us in that race,” explained Outteridge, “I just remember how important it was for us to seal the regatta.

“It was a tricky day on the Nothe course, conditions changing back and forth. All we had to do was finish a few spots in front of the Kiwis to get there. We basically led them around the top mark and we wanted to ensure that we didn’t sail them to the back of the fleet so it wasn’t going to compromise their overall results. But we wanted to make sure that the Medal Race was sealed up.”

In what Outteridge describes as his most memorable Olympic race he and Jensen kept the Kiwis at bay and as Italy’s Giuseppe Angilella and Gianfranco Sibello streaked ahead, they came through in third wrapping up gold with a race to spare. Hardly a commanding performance or one that signified their dominance, but it certainly goes down as their best Olympic race.

For the Kiwis, Peter Burling and Blair Tuke, they followed through in sixth and had silver sewn up before the Medal Race ensuring the pressure on both the Australians and New Zealanders was off in the Medal Race.

Outteridge and Jensen winning gold was just further confirmation of Australia’s dominance of Olympic sailing with Mat Belcher and Page winning in the Men’s 470 and Slingsby in the Laser.

Olivia Price, Lucinda Whitty and Nina Curtis came close to victory in the Women’s Match Racing. They lost out in the final race against the Spanish team but with huge smiles across their faces immediately after defeat, you could be forgiven they were the gold medallists.