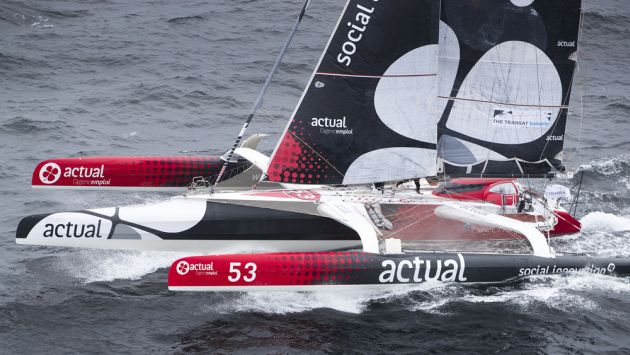 The 21 solo sailors still racing on the third day of The Transat bakerly from Plymouth to New York are now spread out on a north-south axis of over a thousand miles of the north Atlantic.

While the biggest yachts in the fleet – the Ultimes – continue on an extreme southerly course, that is taking the leaders well south of the Azores, the two monohull fleets – the Class40s and the IMOCA 60s together with the Multi50 trimarans – are much further north.

In their path is a deep Atlantic depression that is likely to hit the IMOCAs and the Multi50s head-on tomorrow morning. The Class40s may escape the worst of the headwinds but they too are expecting to hit the sort of conditions that have made The Transat bakerly such a formidable challenge over the years.

The Class40s are amongst the most competitive fleets in solo sailing and – as expected – they are putting on a compelling show. The nine boats still in it (following the retirement of Maxime Sorel on VandB), are spread out over 195 miles, north-south, but there is only 85 miles separating the leader, Thibaut Vauchel-Camus on Solidaires en Peloton-Arsep from Anna Maria Renken on Nivea in seventh place.

Snapping at Vauchel-Camus’ heels in third is Louis Duc on Carac. This morning he said the race has felt more like a trip from Europe to the Caribbean than a typical Transat upwind thrash to New York. But he knows that is about to change.

“We have been sailing through a small ridge and now we are looking at the depression that is on its way,” he said on the satellite phone. “The fleet is very spread out and it will be interesting to see what everyone does. All is well on board and I am in good shape.”

A long way south of Duc, Yves Le Blevec, the third-placed skipper in the Ultime class on board Actual, has been enjoying a downwind race that looks as though it will continue – for him and his two rivals at least – for several more days.

“It's going pretty well,” he said today. “We have had good sailing conditions and I'm pretty happy. I have a lot of work. Although we have not had very harsh conditions, there have been a lot of manoeuvres and I have used the whole sail wardrobe. It always takes a little time to find the rhythm, but I feel really fit. Right now I'm trying to cross a small (area of high pressure). There is little wind and flat seas. Not so bad!”

A long way to the north of the racing fleet the French legend Loick Peyron is continuing to plough a lonely furrow on what might be termed a classic Transat route of old. Peyron is sailing Eric Tabarly’s old boat – the 44ft ketch Pen Duick II – in the same trim as it was when Tabarly won the 1964 Transat, then known as the OSTAR.

Unlike the racing fleet, Peyron does not have access to modern weather software and so is sailing what he sees, much as Tabarly would have done. As of this morning Pen Duick II was cruising along at five knots, 250 miles due west of Land’s End with 2,700 miles still to go to New York. Peyron was just ahead of Tabarly’s equivalent position 52 years ago.

The class rankings at 0400 BST – updated every four hours.