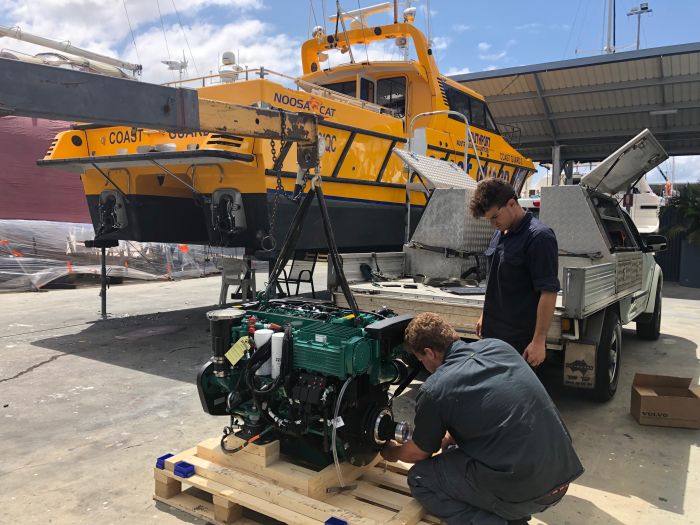 After the traditional smoking ceremony, performed members of the Yugambeh People, the occasion honoured the 60 or so volunteers crucial to keeping the service operating – including boat crew, radio operators and admin staff – as well as presenting the freshly refurbished vessel known as “Coast Guard 2”, back on water after undertaking engine replacement at The Boat Works.

It was a memorable occasion honouring the 60 or so volunteers crucial to keeping the service operating – including boat crew, radio operators and admin staff – as well as presenting the freshly refurbished vessel known as Coast Guard 2, back on water after undertaking engine replacement at The Boat Works.

The 41-foot Noosa Cat, the largest rescue vessel on the Broadwater, had its engines replaced after 4,500 hours and at a cost of around $150,000.

It was also cause for celebration as The Boat Works’ owner, Tony Longhurst committed to providing 10 years of free haul out to the Gold Coast Fleet based at Southport QF1.

As Mike Hoffman explains: “The Boat Works’ sponsorship is very handy indeed. For a volunteer organisation that relies on community support and donations, their support is immeasurable. We have a great relationship with the team at The Boat Works and have had for 20 years.

“It’s a relationship based on mutual respect,” he continues. “The Boat Works and their onsite based marine partners are always willing to help us. They are very understanding because they’re boaties themselves and they realise the importance of the work we do.

“The only time Coast Guard 2 is not capable is when it’s out of the water, so they do a great job of hauling it out and getting work done thoroughly so it’s back on the water as quickly as possible. The Boat Works are a dream to work with and everything happens seamlessly.”

Coast Guard 2 is the Volunteer Coast Guard’s main rescue vessel for the Broadwater and offshore, and Mike and his crew have travelled as far as Moreton Bay to assist in rescues and recoveries.

“There can be as few as one or as many as eight rescues on a weekend, depending on how many boats are on the water and the conditions,” he explains.

“We attend to everything from boats that run out of fuel and flat batteries to capsizes. We were involved in the search and rescue of the vintage aircraft that went down over South Stradbroke in June this year. It’s varied and unpredictable work and it takes the hard work of many, many volunteers to make it happen.”

The 41-foot multihull, Coast Guard 2 can recover vessels up to 85-foot, such as whale watching vessels or superyacht.
According to Mike, the new supercharged D300 Turbo Volvo Engines with DPI Legs are a significant enhancement to their rescue capability.

“These engines are the first in Australia to be configured for a commercial vessel. They are tremendous and sound really cool when you hit the throttle! Most importantly, they get us through the water and to where we need to go quickly.”

Established in 1961, the Australian Volunteer Coast Guard is the largest volunteer marine rescue organisation in Australia and provides marine rescue, education services and Marine Radio Operations from squadrons across the country, including 22 in Queensland.

QF1 Coast Guard Southport was the first Flotilla in Queensland and has been providing Marine Rescue Services to the Gold Coast community for 52 years.

The Boat Works tenants Paradigm Training, which recently relocated from Southport to The Boat Works, are long term supporters of the Volunteer Coast Guard and work closely with them to provide training, licensing and certification.