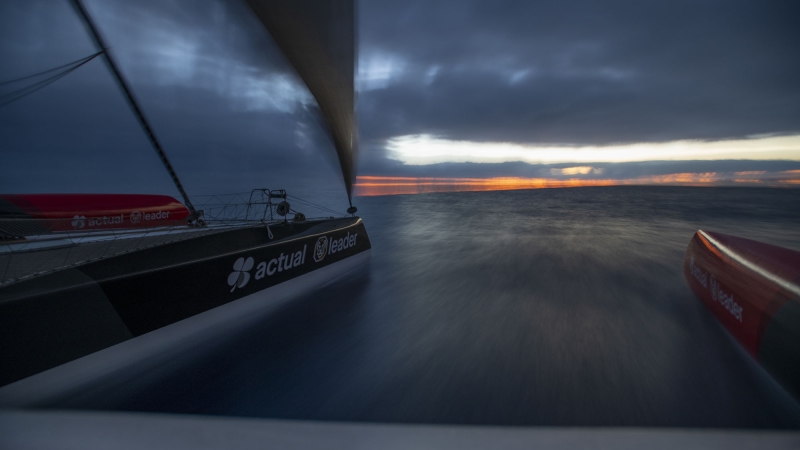 After three weeks racing on the Brest Atlantiques, the two leading trimarans, Maxi Edmond de Rothschild and Actual Leader, are now following a similar route and heading towards the equator at a moderate pace. Meanwhile MACIF, which headed west on Sunday, is preparing to build up speed and no doubt regain some ground. The question, however, is how much…

Following a turbulent crossing from Rio to Cape Town, and an ascent up the Namibian coast – offering unforgettable scenes to those who came close to the shoreline – a certain monotony has now set in on the race. In particular for the two leading trimarans, which, due to light winds averaging 8-10 knots, are now sailing at unusually slow speeds.

Actual Leader's media man, Ronan Gladu today made no secret of how quickly he’d like this stretch to be over: “We’re currently bypassing the St Helena High from the north, it's pretty laborious. Despite low winds of 2-3 knots, the waves are unpredictable. We still have at least another 48 hours in these conditions.”

“It's pretty monotonous”, admits Franck Cammas in a video shot by media man Yann Riou, “But sometimes it’s nice to have days like this without having to make manoeuvres, where you can check over the boat and go at a steady pace before attacking the Northern Hemisphere. We’ve still got a way to go before we reach the equator, but at the same time, we have already made great progress.”

That said, Maxi Edmond de Rothschild gybed this morning in order to best position herself in relation to the south-easterly trade wind, and finally complete her ascent towards the equator. Unless there’s a sudden turn of events, they should cross in front of MACIF, who should be heading northwards in the coming hours.

François Gabart and Gwénolé Gahinet hope this will mean they can gain some ground on Maxi Edmond de Rothschild, or at least Actual Leader. “When you look at Actual's progress, you can see that they’re moving a little slower than we had thought, which is a good thing for us,” Gwénolé said on board to media man Jérémie Eloy, who himself added: “We're moving faster than expected, it's pretty cool.”

The next few days promise to be very exciting…