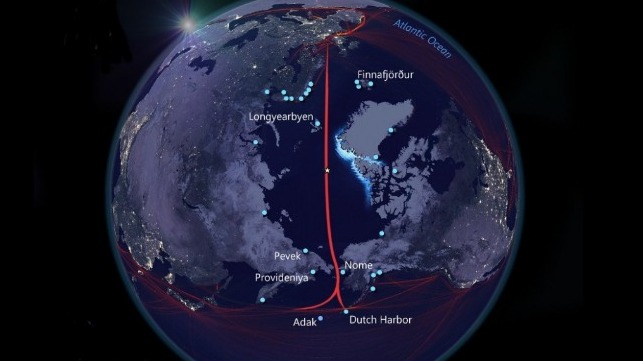 The Maritime Executive. By Mia Bennett.

I recently attended (via teleconference, to cut down on travel time and emissions!) a meeting on future maritime trade flows at the Organisation for Economic Cooperation and Development (OECD)’s International Transport Forum. One session focused exclusively on the Northern Sea Route, the shipping route along Russia’s north coast that has sat at the center of discussions on Arctic development for the better part of two decades now.

Due to Chatham House rules, I can’t quote anyone who spoke in the workshop. I can say, however, that during the session, it quickly became clear that talk of the Northern Sea Route’s potential was starting to seem passé in the face of rapid climate change in the Arctic. The shrinking and thinning of sea ice is happening faster than scientists thought possible – so fast that now, it’s not just the Northern Sea Route or even the Northwest Passage that people are talking about. They’re talking about a trans-Arctic passage cutting straight across the North Pole.

As climate change accelerates and the Arctic Ocean reluctantly exchanges its year-round ice cap for merely seasonal cover, a transpolar passage is likely to open up by mid-century, if not sooner. If Arctic sea ice disappears even for just one summer, as the comprehensive 2009 Arctic Marine Shipping Assessment notes (p. 34), this would spell “the disappearance of multi-year sea ice in the central Arctic Ocean. Such an occurrence would have significant implications for design, construction and operational standards of all future Arctic marine activities.” In the absence of thick multi-year ice, which can be up to five meters deep, any water that refreezes would take the form of much thinner, more navigable seasonable ice.

In other words, forget needing nuclear icebreakers. Within the next few decades, in summer, it may be possible (even if insurance companies and the Polar Code still mandate polar-class, ice-resistant ships) to sail in a regular vessel across the top of the Earth.