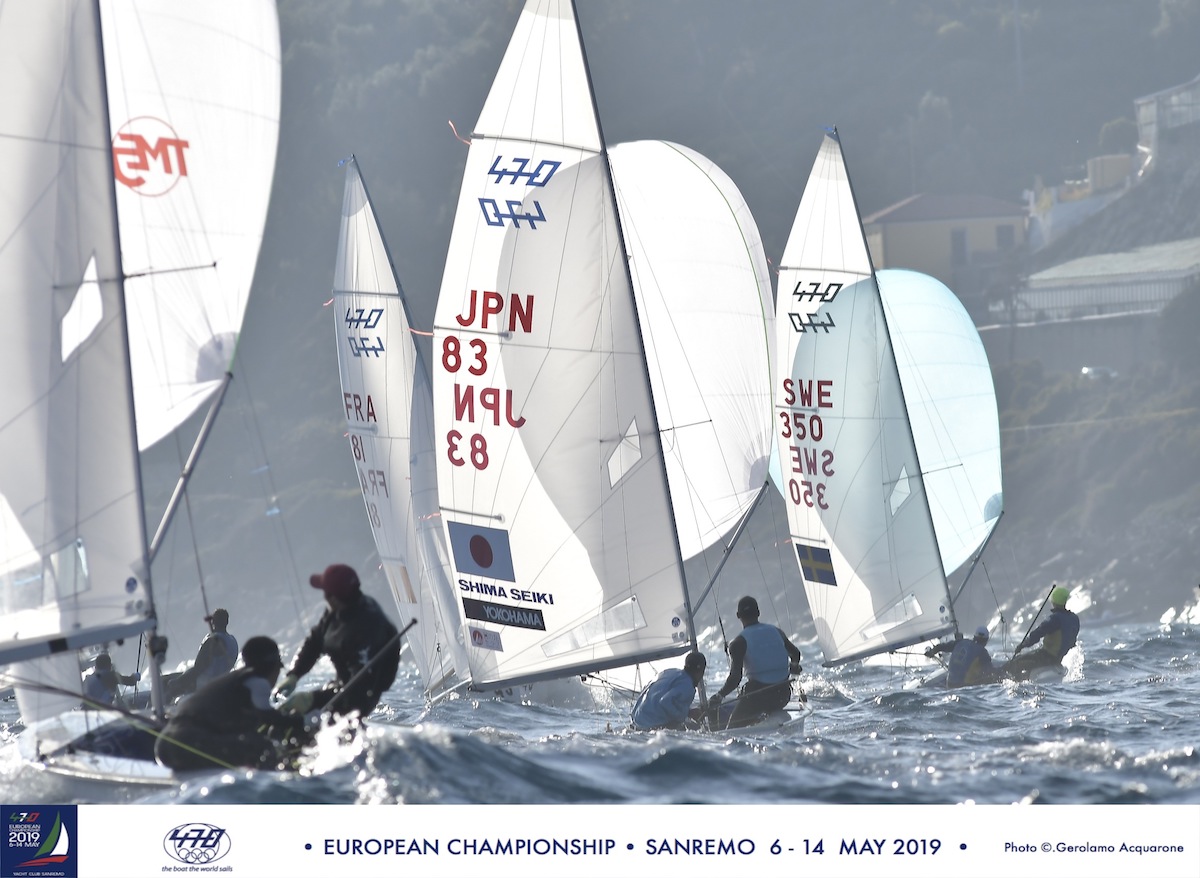 Perseverance was needed, but patience was rewarded, with exciting racing on Day 3 of the 470 Europeans, organised by local Yacht Club Sanremo and Marina degli Aregai, in co-operation with the national and international 470 class.

Several hours of waiting ashore for organisers and sailors , but then breeze picked up and at around 18:10 hours, the Race Committee was able to launch the first and only race of the day for both the Men/Mixed and Women fleets.

On a warm late afternoon, an easterly wind of 10 knots progressively reached 15 knots. The first group to start was Yellow, shortly followed by the Blue fleet and finally by the Women. All in all, racing was over in around 40 minutes.

Today’s race wrapped up the Men’s /Mixed teams’ qualification series. All the crews proceed to the finals and have been divided into Gold and Silver fleets, with the Gold fleet of 35 fighting to make the top ten for the Medal Race, scheduled for Tuesday.

Reigning European champions, Anton Dahlberg/Fredrik Bergstrom (SWE) move to second place, thanks to a win in the Blue group. Australian Rio Olympic silver medallists, Mathew Belcher/Will Ryan, hold a solid margin in the overall Open standings. They finished with a second in the Yellow group, adding to their three straight wins of Day 1.

“My birthday was yesterday,” said Anton Dahlberg. “Long waiting time, but once we got a race, the wind was on our side and I could celebrate belatedly. Super happy to come out with a win today.”

Despite a 12th, Austrians David Bargehr and Lukas Maehr maintain the third spot, tied on points with the Swedes. Spain’s Jordi Xammar/Nicolas Rodriguez and Greece’s Panagiotis Mantis/Pavlos Kagialis both scored a third that puts them in fourth and fifth position respectively.

Race 4 in the Women’s fleet went to Poland’s Agnieszka Skrzpulec/Jolanda Ogar, who caught up some competitors on the overall scoreboard, led by Israel’s Gil Cohen/Noha Lasry. The latter scored a second today and have taken over British duo Hannah Mills/Eilidh McIntyre, who finished eighth today.

In third overall, is the French crew of Camille Lecointre/Aloise Retornaz, just one point in front of Netherland’s Afrodite Zegers/Lobke Berkhout, who are serious contenders for a spot in the Medal Race, as are Silvia Mas Depares/Patricia Cantero Reina (ESP).

Tomorrow, Sunday May 12, the first signal is scheduled for 11:00 with a weather forecast for an intense east-north/easterly.

The 470 Europeans consist of a series of fleet races and a final medal race, if more than five qualifying races have been completed, for the top 10 teams in each fleet. The Championship has an open format, meaning non-Europeans crews can compete, but cannot run for the title.