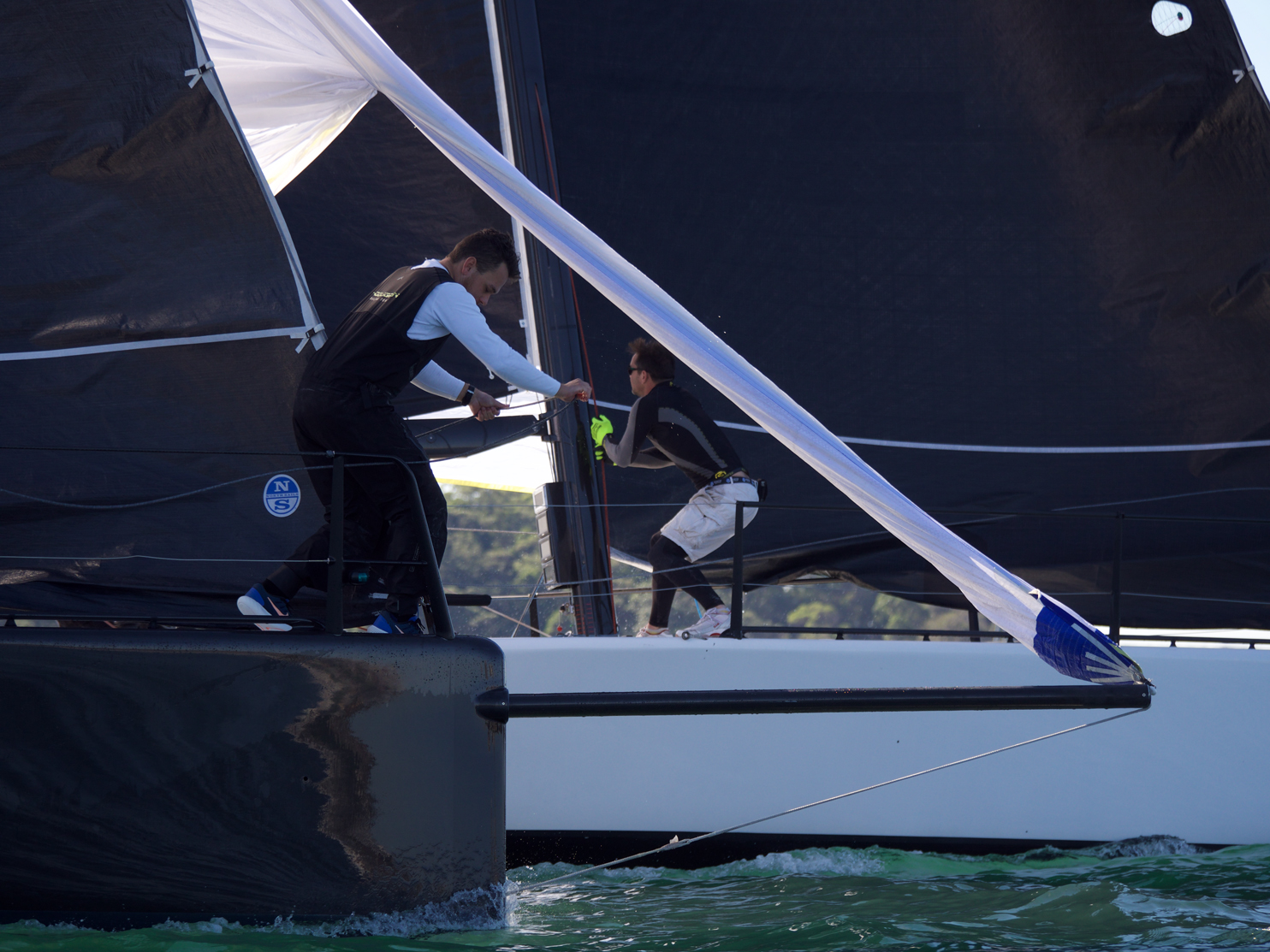 Over six races in very mixed conditions Neville Crichton’s Maserati team posted their third regatta winning performance of the MC38’s 2019 season, which drew seven of the one design fleet to Sydney Harbour.

“We’ve got a good team, we’ve been together two seasons now,” said the winning skipper Neville Crichton back at the host Royal Sydney Yacht Squadron. “Yesterday there was plenty of breeze, we hit 18.5 knots which is flat out. Those rides are exciting, once you get the boat out of the water it’s quite easy to manage but the line between out of control and in control is very close”.

“If you look at the results you could put a blanket over all of us, virtually. When we first started in this class Ginger was the yardstick, now there’s no one that can’t win a regatta.”

Tactician on the race 6 winner and second overall by six points Ginger, Julian Plante, said: “It was nice to come back at this regatta and get the last win, it was a very tricky race. This regatta was super close. It’s about stringing together consistent results; we’ve been close to the mark, there’s just no room for error.”

Ginger’s skipper Leslie Green added: “It was like dodgem cars out there today. This is a great group of people; we all have fun and don’t take it too seriously… though we all like to win!”

Back in the country having skippered Australia to victory at the San Francisco SailGP event last weekend, and calling the shots on Hooligan driven by Daniel Turner, was Tom Slingsby. Marcus Blackmore’s Hooligan was in the running for second in the series until they arrived at the race 6 top gate at Double Bay well after their classmates and the breeze had been through. Their last and Ginger’s first moved Hooligan back to third in the pointscore.

Saturday’s blustery sou’wester delayed racing until the race committee deemed the worst of the conditions had passed. Nasty bullets up to 30 knots, torn sails and plenty of white-water and wipe-outs kept crews busy over three races.  Bow Caddy video of Saturday May 11.

Steve Barlow’s Lightspeed faired worst, tearing two kites – the maximum the MC38s can carry – and therefore not able to finish the third race or record a single score for their efforts. “Even after it backed off to allow racing there were bullets to 30 knots and the breeze was very shifty. The MCs were definitely underwater at times,” Barlow added.

The scenario on Sunday May 12 was very different, a 15 knot morning westerly swinging around to the ESE 6 – 9 knots and patchy so equally tough for tacticians and all MC38 crews who were also forced to fight for space on the harbour when the huge CYCA Winter Series fleet cut through their racetrack.

The next time the one design class meets will be Act 3, June 29-30 hosted by Middle Harbour Yacht Club.