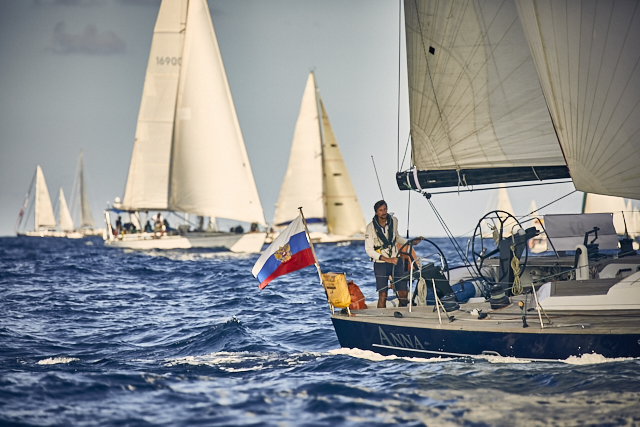 21/11/2016
Following years and months of planning, two weeks of preparations and provisioning and final hours of farewells, the yachts taking part in ARC 2016 made their way out of Muelle Deportivo in Las Palmas de Gran Canaria this morning. There was an air of excitement throughout the marina as the ocean adventure truly begins for 1,307 sailors setting off to the Caribbean shores of Saint Lucia.
Friends and families of the sailors as well as local well wishers and staff from the businesses around the marina lined the dock, cheering and dancing to the loud music blaring out in celebration of the start. Brass band Banda Canarias marched around the marina serenading every pontoon to add to the festival feel. It was an incredible farewell atmosphere as the harbour gradually emptied leaving bare pontoons for another year. The Tourist Board of Gran Canaria, the Port Authority of Las Palmas and the city government of Las Palmas, have been wonderful hosts to ARC participants for the past two weeks and it is their continued support that makes the atmosphere in the lead up to start day so spectacular.
Boats had to identify themselves as they left the marina and headed through a 'gate' before making their way to the start line. To the delight of the spectators, several crews dressed up for their departure, danced on the foredeck as the gathered their fenders and lines and waved their nations flags to bid farewell to their Canarian hosts.
While the ARC is a cruising rally, there is a start and finish line, and the boats are split into divisions according to size, type and competition. A total of 212 yachts sailing under the flags of 31 nations crossed today's start lines. “It was a really great, classic ARC start with lots of lovely sunshine and wind from the northeast.” Said ARC Managing Director Andrew Bishop, “The Racing Division in particular was quite exciting on the line and then the Cruising Division afterwards. With 150 boats you can't help but be impressed with the spectacle of so many boats starting at once. The message for all of the boats heading away from Las Palmas de Gran Canaria is to sail safely and to enjoy what's going to be a fantastic trip across the Atlantic.”
At 12:30 UTC the horn on the Spanish naval ship Tornado sounded for the start of the multihull and open divisions. Glorious sunshine and a constant north easterly breeze of 10-12 knots saw the fleet glide across the offshore line into the Atlantic. Twenty-nine multihulls are in the 2016 ARC, including the exciting Nigel Irens design APC78 Allegra, and Knut Frostad's Outremer 5X Nemo.
It was a particularly competitive start for the 34 boats in this year's Racing Division, providing an exciting spectacle for all watching.  VOR70 Trifork and Swan 46 Aphrodite, were over the line early and receive a 3 hour time penalty. In the beam reach provided by the NE breeze, asymmetric gennekers were quickly hoisted on many boats, keeping the crews busy soon after the start.
The 152 cruising monohulls, which make up 70% of the ARC fleet, enjoyed classic conditions for their start, with a variety of coloured sails hoisted soon after the 13:00 sound signal. Conditions look set to give the fleet a gentle first night at sea, with winds staying around 10-12 knots from the East-Northeast. A small area of low pressure mid-Atlantic will be causing the navigators a dilemma, as the easy gains of a northern route may then bring the boats into light winds later on the course. Playing safe by going south may well be the best option for constant, if light, winds this year.
Today's departure of the ARC fleet sailing directly to Saint Lucia today means a combined total of 287 yachts are sailing the Atlantic under the ARC banner in 2016 – another record entry list for the rally.  71 boats in the ARC+ fleet departed Mindelo, Cape Verde for the second leg of their crossing last Wednesday.
Of the 216 boats in the ARC, 4 are still in Las Palmas; 3 with technical problems delaying their departure, and one boat, Hot Stuff, which has had to return to port following a collision in the pre-start sequence of the Racing Division.
All ARC boats are fitted with YB Tracking satellite trackers, allowing family, friends and fans to follow the fleet from the comfort of home online at http://www.worldcruising.com/arc/viewer.aspx or via the YB Races app.
The majority of boats will take 18-21 days to make the 2700 nautical mile Atlantic crossing, arriving in Rodney Bay Marina, Saint Lucia. Whatever time they make landfall, every boat will be met at the dock by Saint Lucia Tourism Board and World Cruising Club staff bearing a welcome rum punch and cold drinks. There is a full schedule of events in Rodney Bay for all ARC crews and their friends and families, culminating in the ARC Prizegiving on 17 December.