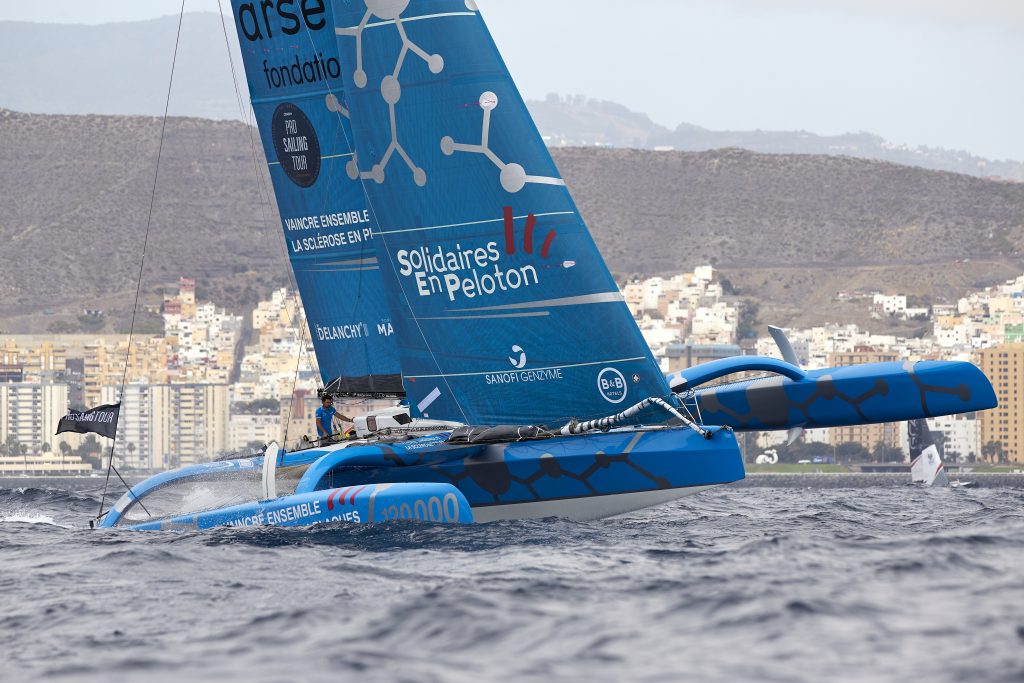 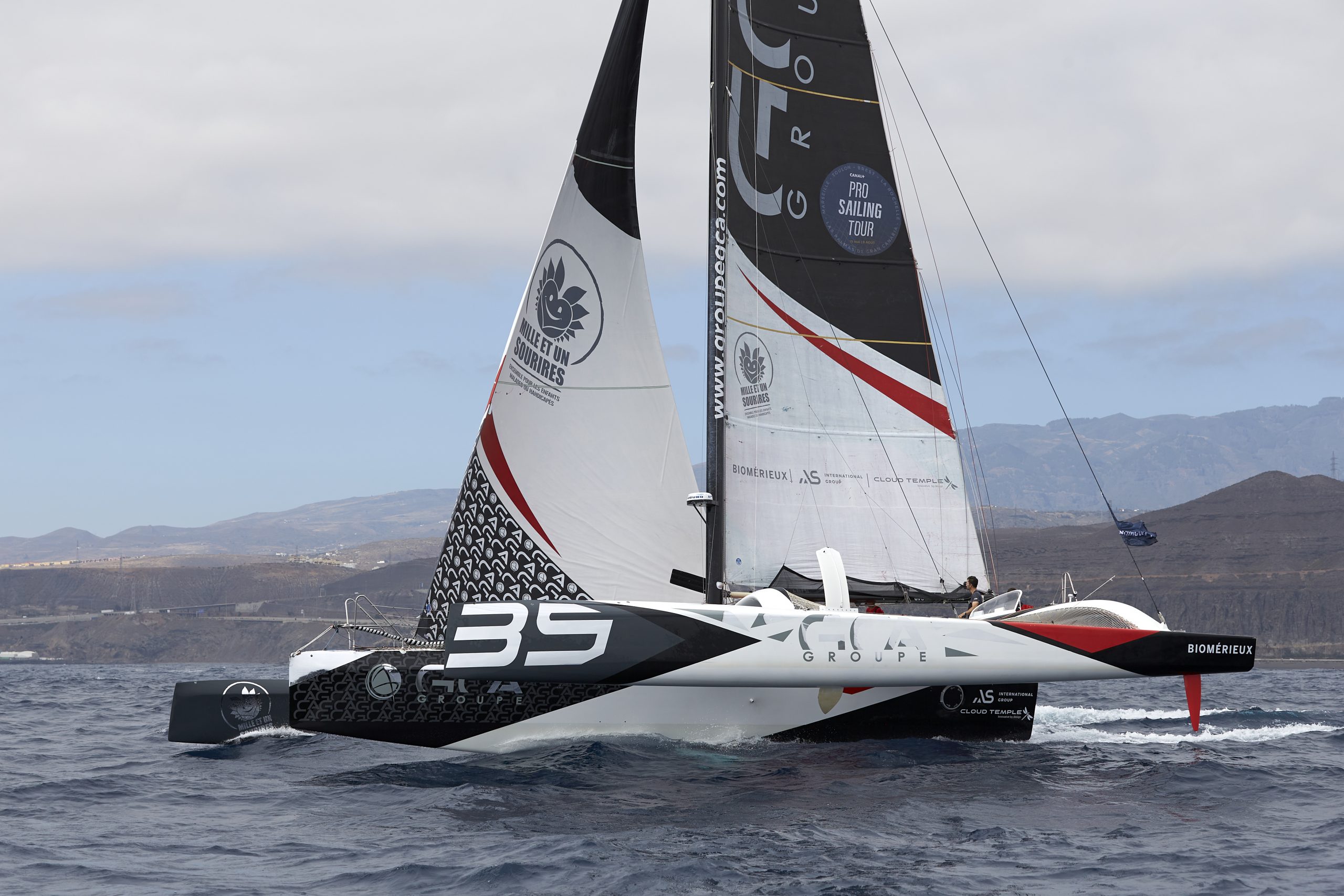 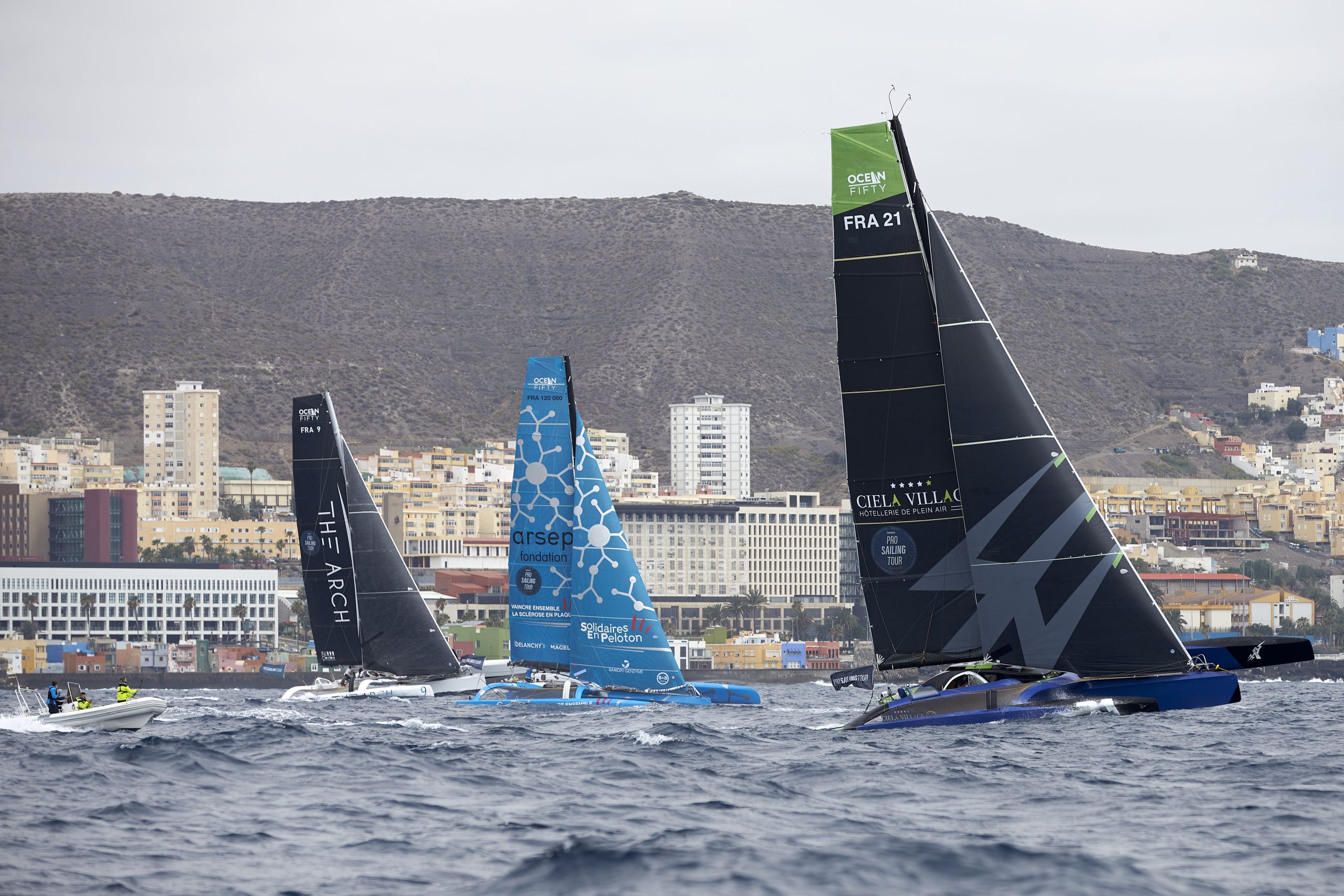 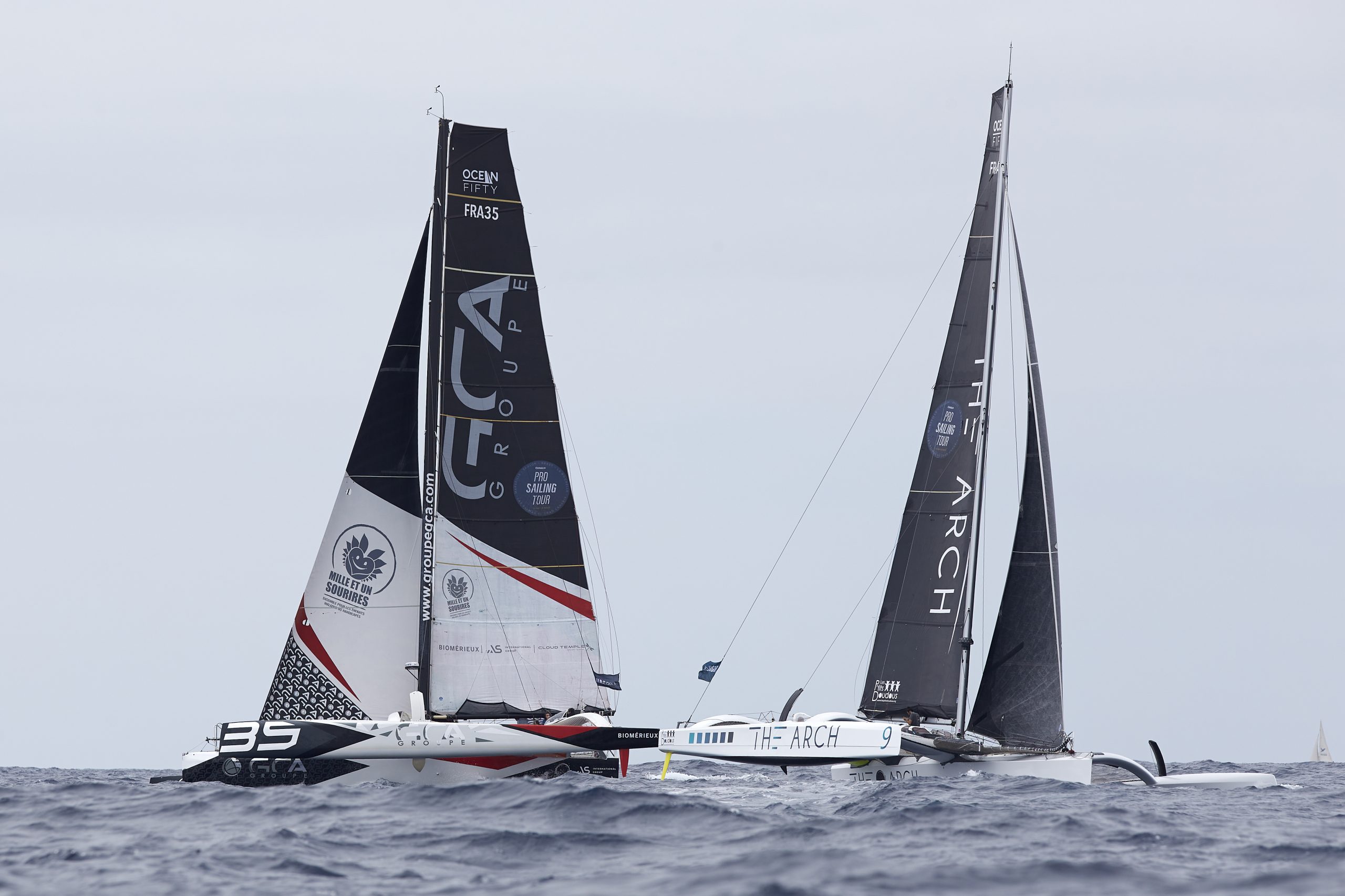 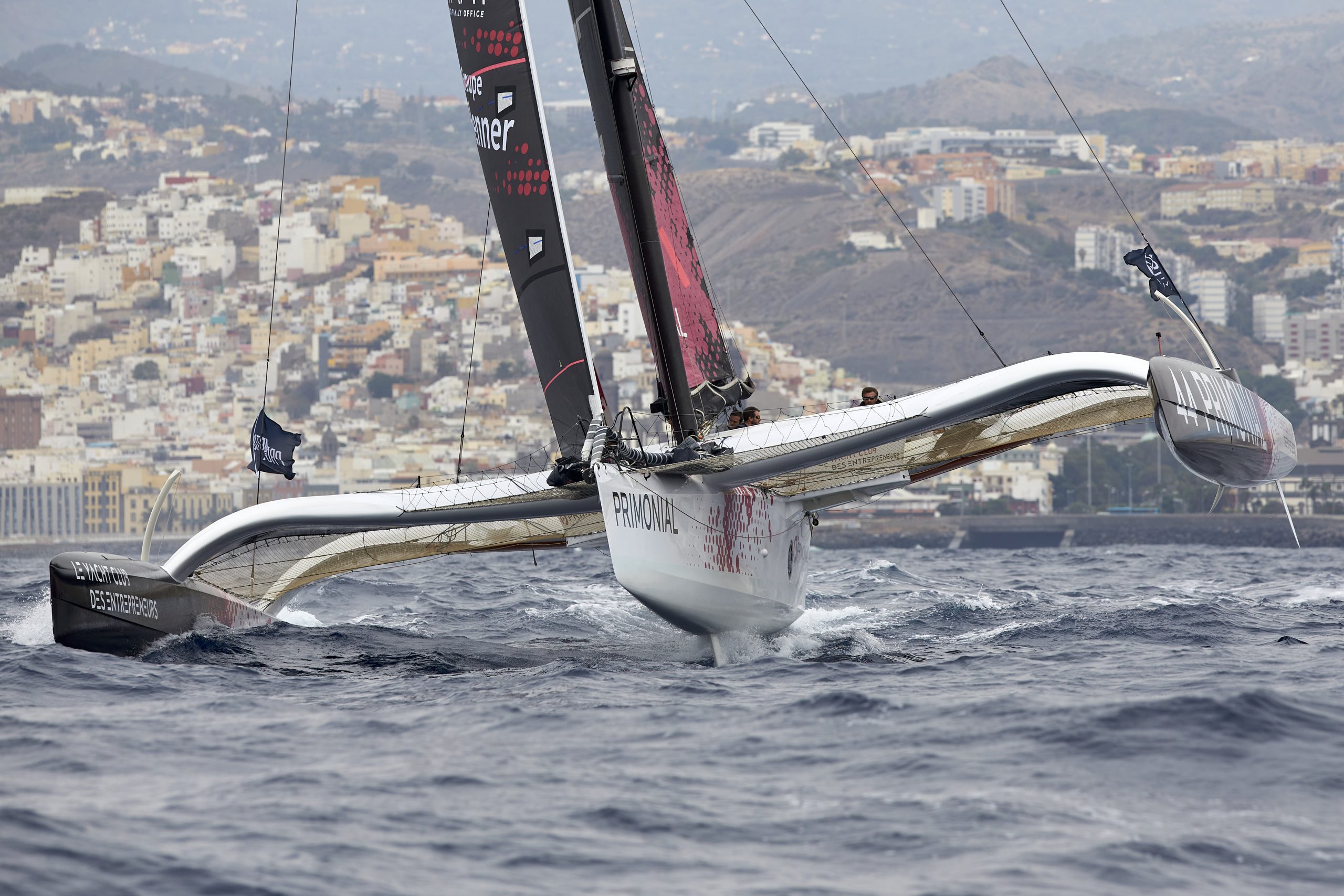 The third episode of the Pro Sailing Tour has gathered the largest ever fleet of the Ocean Fifty trimarans for four days of racing in the waters of Gran Canaria (a Spanish island, located off northwestern Africa). This is the third stage of the competition and follows on from those held in Brest and in La Rochelle France

For the first time since the creation of the class, all seven Ocean Fifties in the world will compete – a milestone that demonstrates the unity among the members of the class and the strength of this new circuit.

Sam Goodchild’s Leyton leads the provisional Pro Sailing Tour after winning the first two events of the season, but according to the Race Director Gilles Chiorri, the playing field is very even, “Despite Leyton’s victory in the first two events, the level is clearly even in terms of performance, and the difference was marked by mistakes. There is no doubt that everyone has worked since La Rochelle to eliminate their weaknesses and fight for victory here in Las Palmas”.

The intense sporting program will consist of a 24-hour regatta and up to ten coastal races. Racing kicked off today with the 24-Hour Challenge. It is a course of more than 300 nautical miles that will test the trimarans’ offshore capabilities in the trade wind conditions that prevail in the islands. The start took place at 11:00 am in front of San Cristobal, south of Marina Las Palmas, from where the fleet will then head out to round Gran Canaria in a counter-clockwise direction. After completing this first leg, they will set course north on a long 90-mile stretch parallel to the west coast of Fuerteventura to circumnavigate the island clockwise back to Las Palmas de Gran Canaria. “Depending on how fast they complete the circumnavigation of Gran Canaria we will decide whether to round Fuerteventura or return along the same uphill leg,” explains Race Director Chiorri. “The goal is to get as close as possible to completing the race in 24 hours.”

The weather forecast ensures a spectacular battle for victory, with wind conditions up to 25-30 knots. The teams will have to manage the intensity of the wind and negotiate the areas of lulls caused around the islands. “This is the most exotic destination on the circuit and the one with the most complicated conditions for these boats,” warns Chiorri.

Just three hours into the race, and as the fleet was performing a series of gybes off the west coast of the island, The Arch, co-skippered by Armel Tripon and Benoît Marie, tore its mainsail, forcing them to withdraw from the 24 Hour Challenge. The boat headed to shore to assess the damage and the team is confident that repairs can be made in time for the weekend races.

After returning to port, boats and crew will move into coastal configuration to race on Friday and Saturday (the 3rd and 4th of July) in up to eight inshore races on a course located in front of the popular Las Canteras beach. The public will be able to enjoy the races from land. “It will be a real spectacle to see the boats sailing at 20 and 30 knots of speed,” says Chiorri.

The champion of the Pro Sailing Tour will be decided at the beginning of August in an ocean race between the towns of Toulon and Brest, a course of more than 1600 nautical miles that will link the Mediterranean and Atlantic coasts of France.

You can follow the race live through on the Pro Sailing Tour. The application developed by Georacing offers live data providing data of  the relative position of the boats on the map, their speed, distance between participants, course and wind conditions.