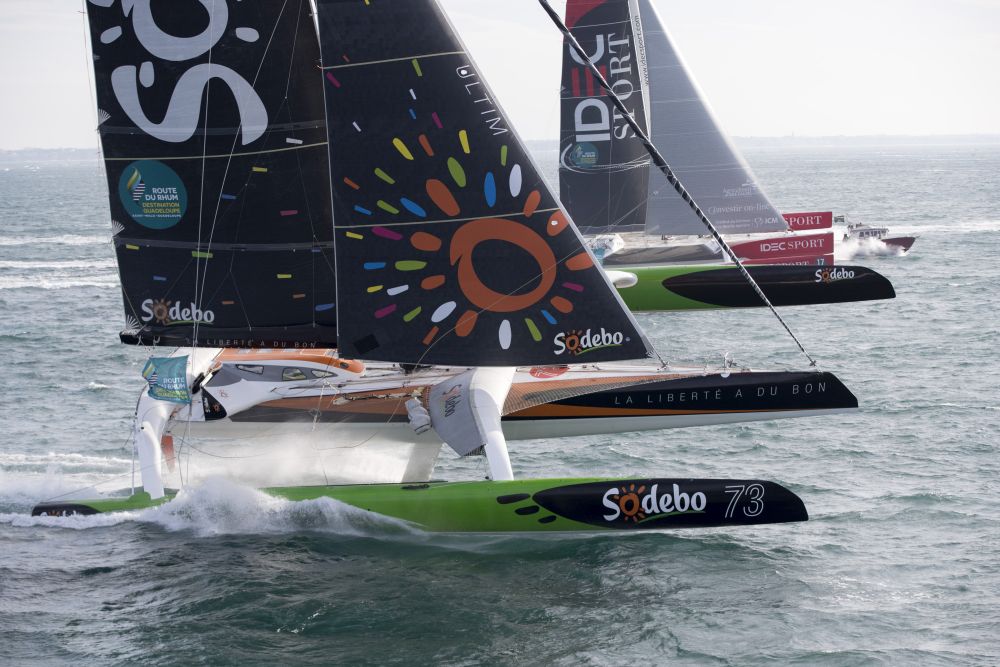 The 11th edition and 40th anniversary staging of the Route du Rhum-Destination Guadeloupe solo transatlantic race got underway in spectacular style today off the Brittany port of Saint Malo, as a record entry of 123 skippers set sail for Guadeloupe.

Conditions could not have been better for spectators and sailors alike as the fleet revelled in 20 knots of breeze coming off the land on a beautiful Autumn afternoon.

After a very conservative start with no one wanting to be over the line early at the beginning of a 3,542-nautical mile course, the fastest boats quickly opened up the throttle.

At the front of the fleet the awesome ULTIME trimarans, led by Seb Josse on Maxi Solo Edmond de Rothschild, were hitting 30 knots of boatspeed.

The fastest racing yachts on the planet were soon flying their windward hulls as they rampaged towards the mandatory gate off Cap Fréhel – 17 miles from the start – where thousands of spectators were gathered on the headland.

Among those in their wake were the leading IMOCA monohulls showing their paces with foils lifting the boats from the water as they sped westwards led by France’s Vincent Riou on PRB.

In their wake came the huge 53-strong Class40 monohull fleet at the start of what will be the most competitive race in that class’s history.

Near the back, holding ninth place in the Rhum Multi fleet, was the hugely popular French sailor Loïck Peyron at the helm of the bright yellow Happy. This is a sistership of the small trimaran sailed by Canadian yachtsman Mike Birch when he won the inaugural Route du Rhum in 1978.

Four years ago in this race Peyron set a new outright record of seven days and 15 hours on the maxi trimaran Banque Populaire and the routing predictions for this race suggest that that benchmark could be lowered by as much as two days by the leading ULTIMES.

But before they can enjoy a fast ride to the Caribbean in the trade winds, all the sailors will have to face some very rough weather that is coming their way on Tuesday.

The predictions are for big seas, 35-knot winds gusting to 55 knots and a weather picture showing very unstable conditions for most of the rest of the week.

It is thought that some of the skippers in the slower classes will decide to head for refuge in ports west and south of Saint Malo – like Roscoff or La Rochelle – and prefer to wait for the weather to ease, rather than risk damaging their boats early in the piece. Race rules permit them to make a stop of this kind without penalty.

At the gate at Cap Fréhel the fleet leader was Josse who is awarded the Trophée du Cap Fréhel Banque Populaire Grand Ouest. But he had François Gabart in MACIF on his tail with Armel le Cleac’h in third place not far behind on Maxi Solo Banque Populaire.

The next group to pass the gate were the Multi50s where the trophy went to Armel Tripon on Réauté Chocolat followed by Thibaut Vauchel Camus on Solidaires en Peloton Arsep and then Erwan Le Roux on FenêtreA–Mix Buffet.

In the 20-strong IMOCA class Riou was still setting the pace on his orange PRB, now fitted with foils, with his fellow countryman Jérémie Beyou second on the brand new Charal and then Boris Herrmann’s Malizia II – Yacht Club de Monaco in third place.

In Class40s, meanwhile, the race to Cap Fréhel was led by Antoine Carpentier on Beyond the Seas with Nicolas Troussel on his tail on Corum followed by Kito de Pavant on Made in Midi.

In the build-up to the start the upcoming weather was the big talking point, especially for the slower classes who face a very rough time as they try to head west across the Bay of Biscay. But Michel Desjoyeaux, the two-time Vendée Globe winner who is not taking part in this race, said his own routing analysis suggested the weather picture suggested the outright record is destined to fall.

“For the ULTIMES we need to see how they get through the strong stuff, and if they can get through before the really bad weather,” he said. “But even if I am conservative about the sea conditions at the beginning, I have run a route and they could reach the north of Guadeloupe in five days and five hours, so I think the record is almost certain to fall.”

Marcel Van Triest, the router for Armel Le Cleac'h, said the ULTIMES should escape the worst of the weather. “They will be ahead of it before it gets bad,” he said. “It will be interesting to see what happens at Ushant at the Traffic Separation Scheme; that will be the first thing and there could be a big separation there immediately. That largely dictates if you go north or south. They should be at the latitude of Spain/Portugal by Monday at 6pm depending how long they stay on port tack.”

In the Class40 fleet, British sailor Sam Goodchild at the helm of the Netflix-sponsored Narcos Mexico said he will not be joining those who decide to ride the worst of the weather out in port.

“It looks like a complicated first week,” he said. “And there are a few people talking about stopping, including some of the top guys, which adds to the general pressure. But personally I am preparing to race to Guadeloupe. The option is there. I don't want to start thinking about stopping and then continuing because then you are not ready for anything. The problem is that you really need to go quickly in the first 24 hours as the rich get richer, so you have to keep the pedal to the metal.”

Thomas Coville on the multi-coloured Sodebo Ultim said the way to head west this time is to head north first. “I feel pretty good,” he said as he prepared for the start. “The weather is much the same as yesterday. It will be cool and calm for the start, very fast and as soon we get clear of Brittany it will be tough. There is only one way to go and that is north, for once not south. It is going to be tough.”