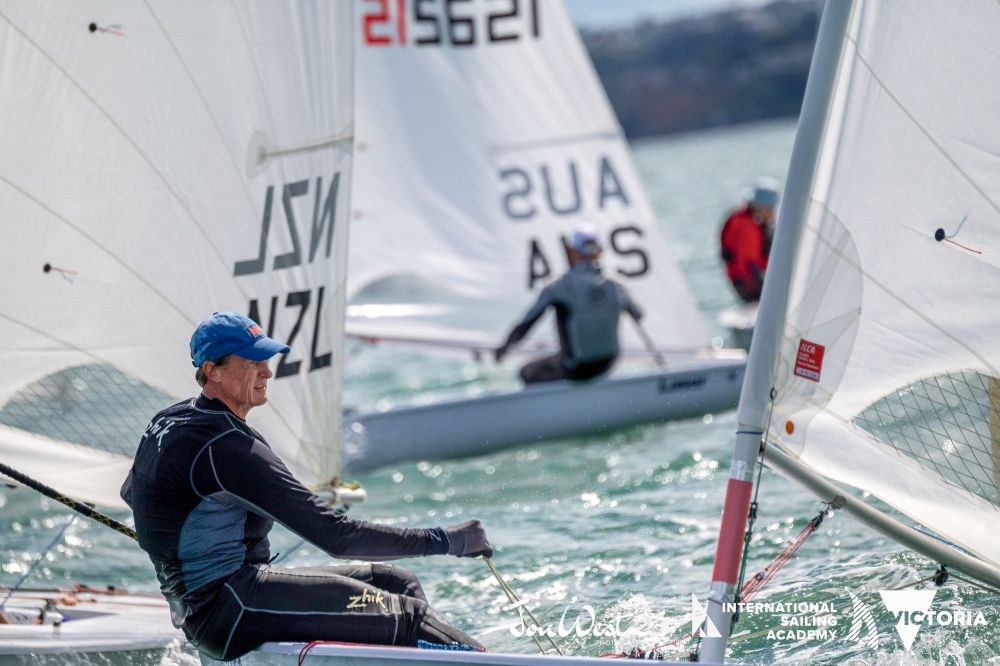 Two races were sailed on the first day of the Oceania and Australian Laser Masters Championships on Corio Bay, with stand-out performances in some divisions and mixed results in others.

“It all came down to the first beat,” he said. “It was very gusty and shifty and some bailed early. If you were confident enough to hold your line, you did well.”

This was a division where the top three were very consistent, with Peter Hurley (USA) scoring two 2nd places and Andrew Dellabarca (NZL) getting a 3rd and a 4th.

In the Standard Apprentice, Ian Elliott (CAN), Matt Blakey (VIC) and Ryan Mclaughlin (NSW) dominated the scoring. In the Grand Masters, Jan Scholten leads Alan Davis by a single point. None of the Great Grand Masters was able to dominate but Michael Keaton (1,4) and Garry Lock (3,2) are both on five points.

Vanessa Dudley is a two-time World Champion and she also had a strong start, with placings of 4th and 6th to be 4th overall in the Radial Grand Masters.

“I thought the left was working a bit better today,” she said, “But it was shifty and there were big changes in wind speed as well. I’m happy with the start but I was a bit slow downwind. I’ve got to get quicker.”

Friend and rival, Lyndall Patterson, concurred on the conditions but said she had enjoyed the day. She was one place behind Vanessa Dudley in race one.

“In the first race I had a reasonable start, but in the second I got a bad one and had to play catch up.”

Catch up she did, finishing 11th to be 7th overall.

Noted coach and video interviewer, Jom Emmett (GBR) is the sole competitor in the Radial Apprentice division, but understandably was one of the fastest overall on the day.

There are two sailors in the 4.7 division, where Susannah Gillam beat Wendy Wilson in both races.

The mood in the boat park before the race was understandably subdued, given the ongoing COVID-19 crisis. Old friends bumped elbows rather than shaking hands and the level of conversation was muted. Sailors mingled in twos and threes rather than large groups. There are not the loud outbursts of laughter at a good joke or a re-telling of an old sailing story that characterise Masters sporting events around the world. But they were determined to put on a brave face.

Glyn Purnell, a Great Grand Master from Manchester in England was philosophical about the whole situation. He came here to sail in the now cancelled World Laser Masters event, but was looking forward to getting out on to Corio Bay.

“It’s about five degrees in Manchester right now,” he said. “If I get stuck here (in Australia), well, worse things could happen.”

Facing 14 days of government-imposed isolation when he returns home is Kiwi Chris Sadler. But for him it is no big deal. “I was going to do that anyway,” he said. “I’ve got elderly relatives and people I sit next to at work. It’s no big deal. I’ve got a launch (powerboat) down at Orakei, a few minutes from my house, that needs work. A couple of weeks of sanding and painting will be good.”

The bottom line is that the sailors are taking the crisis seriously while hoping that the situation doesn’t worsen, causing the cancellation of this event.

To watch video interviews by Jon Emmett with Peter Seidenberg go to https://youtu.be/FhDmSOt0Hn8 and with Alan David go to https://www.youtube.com/watch?v=gkMjaFbarXM