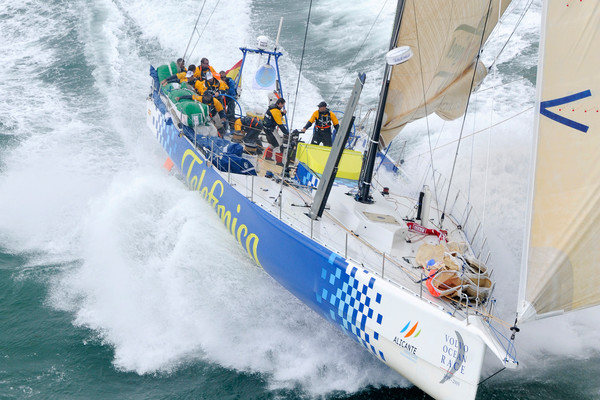 Gothenburg – May 3 2018: Telefónica Blue will join former race winner Ericsson 4 on the startline of the Legends Race this summer.  She is the second Volvo Open 70 to confirm her entry in a fleet which will consist of around 12 boats from many of the past Whitbread and Volvo Races.

In a big budget effort, Telefónica Blue , skippered by Legends ambassador Dutchman Bouwe Bekking, was part of a Spanish two-boat campaign, along with sister ship Telefónica Black who had Legends ambassador Roger Nilson as navigator. Although both men had unfinished business, having completed the race on multiple occasions and never won, it was Bouwe Bekking, whose previous Spanish entry Movistar had been abandoned in the previous race, who had the most to prove with Telefónica Blue.

Only the cruel would have felt no sympathy for Bekking and Telefónica Blue as night fell on the first night of Leg 1. Telefónica Blue had won the opening in-port race a week earlier, but one of the yacht's tiller arms had broken, forcing Bekking to put into port for a 12-hour repair job. It was already apparent that Telefónica Blue, which had excelled in lighter breeze, was struggling in the heavier, downwind conditions. They finished the leg in a disappointing fifth.

A second place finish on Leg 3 rejuvenated the crew and they set off in a determined mood for China. After five days of sailing, the fleet reached the Luzon Strait and a storm was waiting for them. Only four boats remained on the racetrack and those left faced a decision: stay and wait for better weather, or head out and make huge gains but take a huge risk. Telefónica Blue  took the plunge, kept control and used their hefty lead to win what most agreed at the time was the hardest leg they had ever sailed.

After changing rudders and taking a three point hit for doing so, Telefónica Blue  collided with an uncharted rock moments before the start of Leg 5 and returned to the dock for repairs, restarting the 12,300 nm leg 19 hours later.

The team made an excellent start on Leg 9.  Just one point split Puma and Telefónica Blue  as they set off on the 525-nm sprint, which went calamitously wrong for Telefónica Blue. Leading the fleet out of Marstrand, Sweden, and instead of narrowly passing a rock, Telefonica Blue hit it hard and her race was lost.  The boat was repaired and sailed to Stockholm, for the final leg to St Petersburg in Russia, in which she finished third, enough to retain third place overall and winner of the in-port race series.

For the 2011-12 race, previous race winning skipper Mike Sanderson was tempted back to take charge of the boat, renamed Team Sanya Lan, but despite a world-class crew line-up, the boat suffered damage on numerous occasions, leading to retirement on legs 1 and 5 and missing Leg 6 completely.

Now, in Dutch hands, her home port is Scheveningen/The Hague, and she is renamed Ocean Breeze.  She is in tip top condition, having benefitted from a recent full refit.  From July on, she will be used for participation in some of the best regattas and offshore matches in both the Caribbean and the Mediterranean.