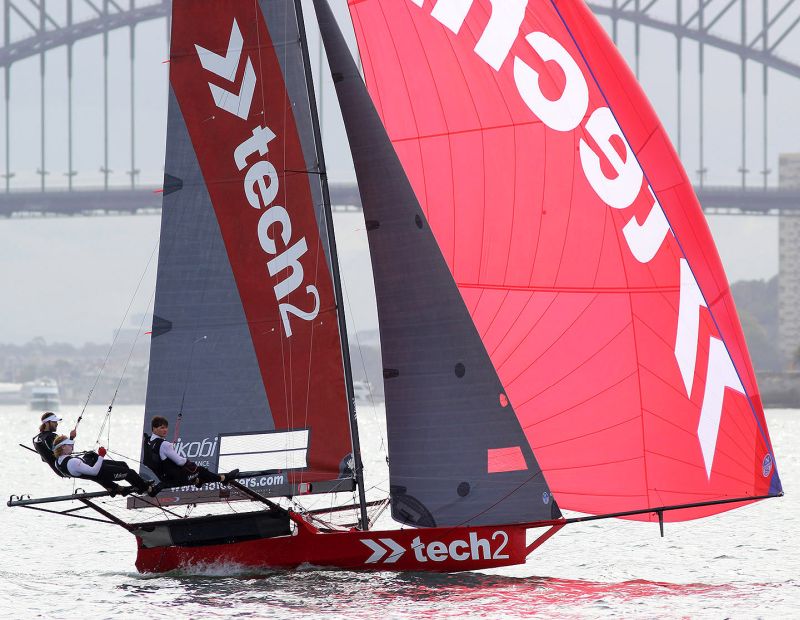 09/03/2020
The Tech2 team of Jack Macartney, Charlie Wyatt and Trent Barnabas became the Australian 18 Footers League Club champions after leading all the way to score a convincing win in Race 16 of the series on Sydney Harbour today.
Tech2 had all the answers for the challengers and, but for a few moments on the first lap of the course, was never in danger of losing as the skiff handled the light Southerly conditions which varied from 15-knots down to just barely a breeze.
Macartney's team crossed the finish line 1m10s ahead of Noakesailing (Sean Langman, Ed Powys and Nathan Edwards), with Winning Group (John Winning Jr., Sam Newton and Scott Babbage) a further 51s back in third place.
Smeg (Micah Lane) finished in fourth place, followed by Rag & Famish Hotel (Bryce Edwards), Finport Finance (Keagan York), The Oak Double Bay-4 Pines (David O'Connor), Bird & Bear (Tom Clout), The Kitchen Maker-Caesarstone (Jordan Girdis) and Yandoo (John Winning).
Tech2 went into today's final race of the championship trailing The Oak Double Bay-4 Pines and Shaw & Partners Financial Services (James Dorron) by five points and need to defeat both teams by five placings to win the title.
Shaw & Partners was recalled at the start she lost her chance to retain the series lead while 'The Oak' could manage only a seventh placing, which was just not quite good enough to hold off Tech2.
Final points in the championship were:  Tech2 81 points, followed by The Oak Double Bay-4 Pines on 82, Shaw & Partners Financial Services on 86, Smeg 108, Rag & Famish Hotel 117, and Appliancesonline.com.au on 120.
The race to the first windward mark off Clark Island was close with Tech2 leading from a close group which included 'The Oak', Smeg, Winning Group and Noakesailing, but Tech2's speed off the wind on the long spinnaker run to Obelisk Bay was outstanding as the skiff quickly opened up a 40s break over her nearest challenger, which was Smeg.
The breeze faded on the work back to Rose Bay.  Smeg revelled in the conditions and got to just 7s behind Tech2 at the mark, but once again, Tech2's speed downwind was too much for her opposition as she again pushed her lead (over Noakesailing) back out to one minute.
Over the final lap of the course, Tech2 was unstoppable and extended her lead to 1m55s at the Shark Island mark before cruising home over the final two legs of the course to her 1m10s victory.
The 2020 JJ Giltinan 18ft Skiff Championship starts next Saturday
Race dates are:
Saturday          March 14          Race 1
Sunday             March 15          Race 2
Tuesday            March 17          Races 3 & 4
Wednesday      March 18          Races 5 & 6
Thursday          March 19          Race 7
Saturday           March 21          Race 8
Sunday             March 22          Race 9
Spectators can see all the teams while they are rigging, then follow the racing on board the club's spectator ferry, which leaves Double Bay Wharf, alongside the rigging area, at 2pm.
Book online through the club's website www.18footers.com
AeroMedia Live Broadcast team will be out on Sydney Harbour to capture all the action.  For those who can't make it onto the water, live streaming is available at www.18footers.com and clicking on the '18 Footers TV' link.
– Frank Quealey