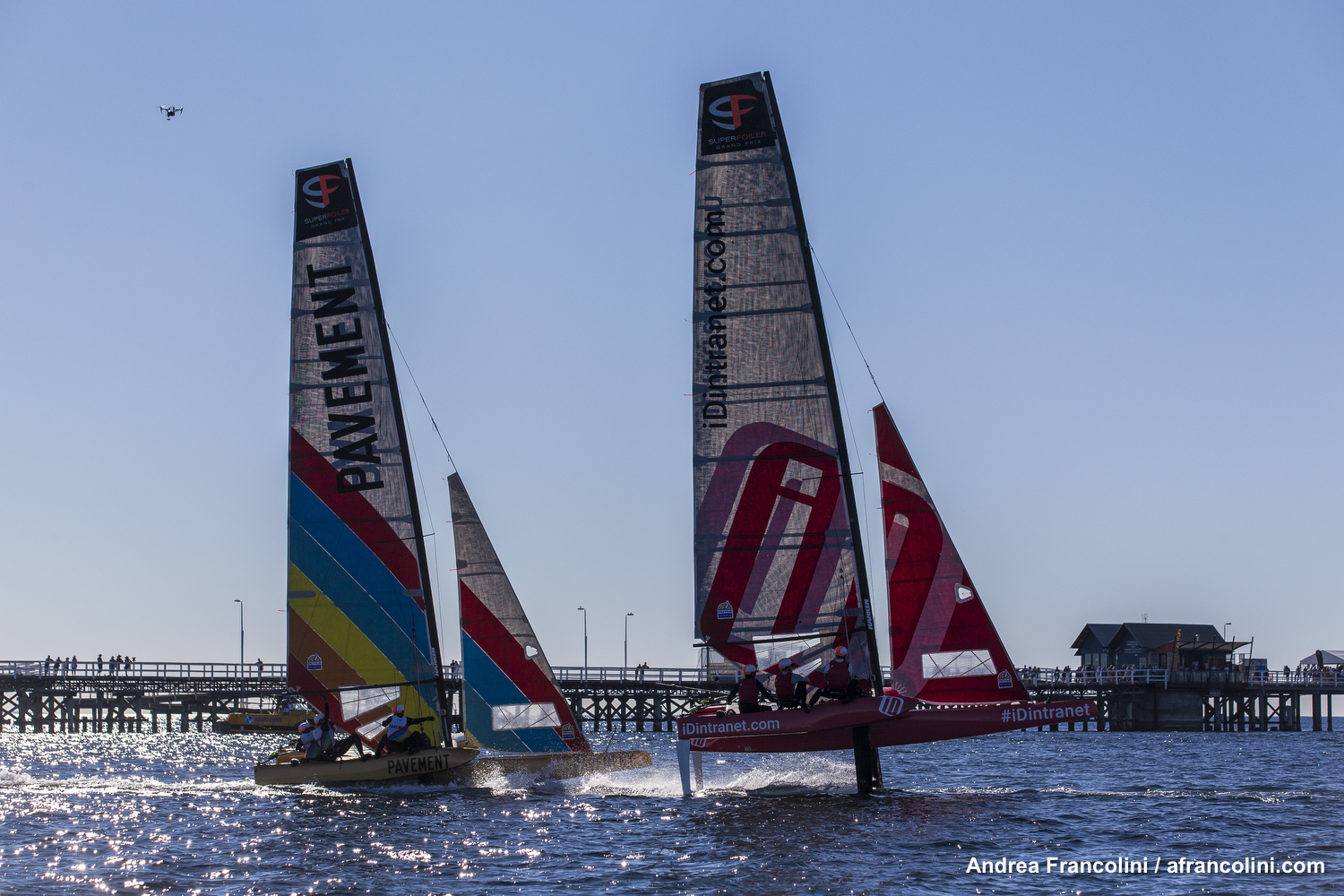 Busselton, WA: tech2 was the chief beneficiary of tricky conditions on the second day of racing, where three different winners were crowned during the SuperFoiler Grand Prix in Busselton.

tech2 twice tasted victory on Geograph Bay with Luke Parkinson, Ayden Menzies and Sam Newton surging to the top of the regatta leader board after two wins from the four races on offer.

“It was a bloody good day, we are happy to take away those results,” said tech2’s Bowman, America’s Cup winner, Sam Newton who celebrated his red flyer’s first win in four regattas, “It’s ‘Supercharged Sunday’ so anything can happen. All it does is put a bit of extra pressure on us if anything but we are happy to be leading.”

tech2 had the most to gain from Euroflex’s absence (the championship leader hasn’t raced in Western Australia after suffering board damage in training but is hoping to return tomorrow). Tech2 pressed home their advantage early.

“Euroflex look like they will be back on the water and it will be good to have them on the line, we will give it everything and see how we go” said Newton

The gong for most consistent performance belonged to Kleenmaid’s Olivia Price, who alongside world champions Josh McKnight and Harry Morton, celebrated a strong showing in Busselton with a second and three third placed finishes.

“Super-stoked to be in second, I think it was the consistency that did it for us. It is the best we have got so far and hopefully we can continue with it and finish on a high,” said Kleenmaid’s Bowman Harry Morton – who will head into the final day in a tie for second just five adrift of tech2 and with their eyes firmly on a podium finish.

Pavement are level with Kleenmaid in second after Perth’s Steve Thomas secured a maiden SuperFoiler triumph on home waterways, less than 24 hours after injuring his thumb in an epic capsize and after his two usual team-mates flew out to Oman.

“I think Dan and Rhys will be bitterly disappointed it wasn’t them, but I guess it had to come at some point so I am happy,” said Pavement’s skipper Steve Thomas, “We will be looking forward to being more consistent tomorrow. It is Supercharged Sunday so there are plenty of points on the line so we will come out all guns blazing,”

iD Intranet was the fourth different winner in five races on Saturday and their skipper America’s Cup sailor Paul Campbell-James heads into the final day of racing on a high – “It is nice to end the day on a win, it was a good race as well,” said Campbell-James, “Everyone is in it. tech2 had a good day but it is all to play for everyone is close.”

Sunday’s racing will be livestreamed on www.superfoiler.com with double points on offer across four scheduled races.