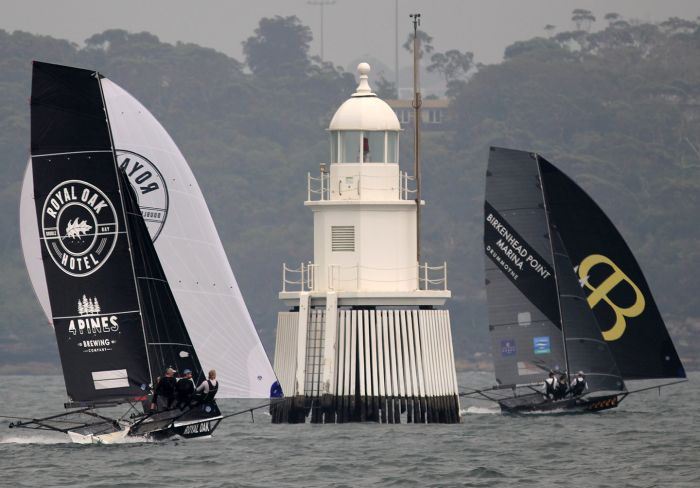 The race for second place on the second spinnaker run to Obelisk Bay. Photo Michael Chittenden.

13/01/2020
The Winning Group team of John Winning Jr., Seve Jarvin and Sam Newton didn't start in today's final race of the NSW Championship as the team had already won the title title but today's winner Tech2 showed that the Winning Group may have a tougher battle on their hands when they line up in next week's Australian Championship on Sydney Harbour.
Jack Macartney, Charlie Wyatt and Trent Barnabas handled the 10-15 knots SSE wind brilliantly in Tech2 to score an easy 2m25s win over the very consistent The Oak Double Bay-4 Pines team of Aron Everett, Courtney Mahar and Charlie Gundy.
Noakesailing (Steven Thomas, Ed Powys, Nathan Edwards) was with the leading group throughout the race and finished a further 31s back in third place.
Birkenhead Point Marina (Tom Anderson) held the lead midway through the first lap of the long Southerly course but faded over the final leg of the course to finish in fourth place, ahead of Appliancesonline.com.au (Brett Van Munster) and Shaw & Partners Financial Services (Harry Bethwaite).
Final pointscores in the NSW Championship showed that Winning Group finished with a score of five points, ahead of The Oak Double Bay-4 Pines on 12, Shaw & Partners Financial Services on 15, Appliancesonline.com.au 17, Tech2 on 18 and Smeg (Micah Lane) on 21.
The Oak team continued to show very consistent form and held a narrow lead over Noakesailing, Smeg and Dal Zotto (Jack Sprague) at the first windward mark off Clark Island, but the experience of Jack Macartney and his team proved a winner when they elected to reach with just two sails before setting their spinnaker on the long run to Obelisk Bay.
Tech2 held a 25s lead over Smeg and The Oak Double Bay-4 Pines as the trio set off on the work back to the Shark Island mark in Rose Bay.
Tech2 and The Oak tacked first while Smeg and the improving Birkenhead Point Marina sailed a course further to the middle of the harbour.
Smeg suffered gear problems and was forced to retire but theBirkenhead Point Marina team were superb as they closed in on Tech2, before grabbing the race lead as the pair rounded the Rose Bay mark.
Once again, the Tech2 team was brilliant as they opened up a 30s lead over Birkenhead Point Marina at the Athol Bay mark, and from that point the result was never really in doubt.
The race for the minor placings was far from settled as The Oak Double Bay-4 Pines, Birkenhead Point Marina, Noakesailing and Appliancesonline staged a wonderful battle over the final lap of the course.
The Australian 18 Footer League's 2019-2020 Season continues next Sunday when the club will stage Races 1 and 2 of the Australian Championship.
Spectators can see all the teams while they are rigging, then follow the racing on board the club's spectator ferry, which leaves Double Bay Wharf, alongside the rigging area, at 2pm.
Book online through the club's website www.18footers.com
AeroMedia Live Broadcast team will be out on Sydney Harbour to capture all the action.  For those who can't make it onto the water, livestreaming is available at www.18footers.com and clicking on the '18 Footers TV' link.
– Frank Quealey, Australian 18 Footers League