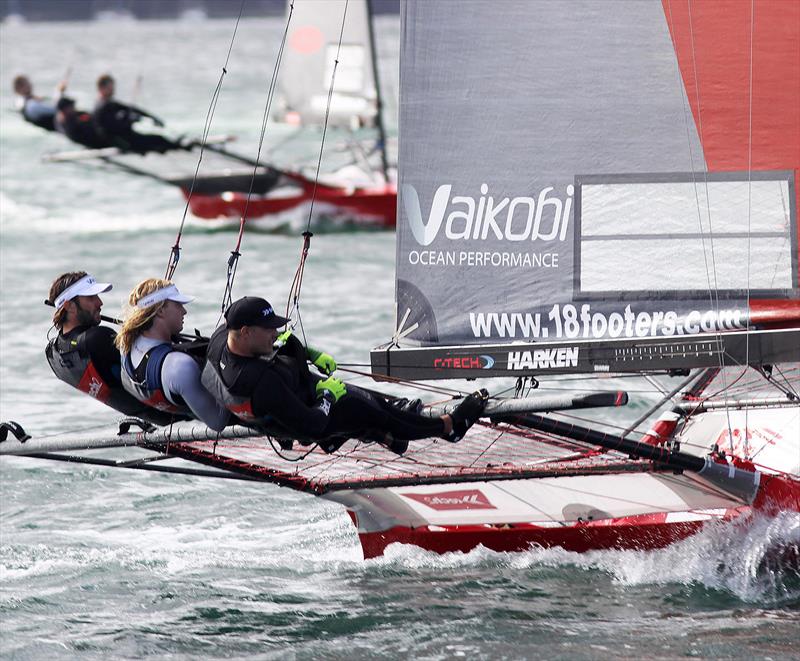 The Australian 18ft Skiff champion tech2 team of Jack Macartney, Charlie Wyatt and Lewis Brake took the first step towards adding the JJ Giltinan Championship to an already impressive record this season when they came from behind to take out Race 1 of the regatta on Sydney Harbour today.

With a great display of crew work in the 12-18 knot south/south-easterly breeze, tech2 worked her way through the fleet to score a 27 second victory from the Smeg team of Michael Coxon, Ricky Bridge and Trent Barnabas. Finport Finance (Keagan York, Matt Stenta and Phil Marshall) was a further 2 minutes 44 seconds back in third place.

After winning the start, tech2 found herself on the wrong side of the breeze on the short work across the Harbour to the first windward mark. She was only mid-fleet as the skiffs raced up the Harbour, two-sail reaching from Clark Island to Obelisk Bay.

Sean Langman’s Noakesailing grabbed the early lead from The Oak Double Bay-4 Pines, appliancesonline.com.au (Simon Nearn), Andoo, Yandoo and Yandoo Winning Group (John Winning Jr.) at the Clark Island windward mark. Langman continued to hold the lead as the fleet began the long work back from Obelisk Bay to the mark off the southern end of Shark Island.

Noakesailing continued to hold the lead into Rose Bay, although Smeg was beginning to make a strong challenge for the lead, and tech2 was also starting her challenge.

Smeg elected to sail a course closer to Shark Island and took a 12s lead from Noakesailing which had sailed further to the left and slightly overlaid the mark. tech2 had made her way up to third place at that point, but was still 40s from the lead.

The Oak Double Bay-4 Pines was in fourth place, just ahead of Yandoo Winning Group and Finport Finance and a good battle was developing between the three teams until Yandoo Winning Group was forced out of the race after taking on water following the earlier collision with another competitor, which is the subject of a protest.

Over the next two legs of the course, Smeg continued to maintain her margin over tech2 as the pair eased away from the rest of the fleet.

The next group, The Oak Double Bay, Finport Finance, Appliancesonline and Shaw & Partners Financial Services (Jim Colley) was absorbed in a good battle as the fleet headed back to Obelisk Bay on the second lap of the course.

A shift in the angle of the breeze allowed the fleet to use spinnakers on the long run, but it wasn’t a happy run for the teams on Yandoo and Noakesailing, which were both involved in a long-running battle with a Manly ferry travelling at a similar speed as the two skiffs.

Shaw and Partners was another team to lose several places after capsizing close to the Obelisk Bay mark while placed in the top five of the fleet.

Finally, the pressure being applied by tech2 enabled the Australian champion team to take the lead away from Smeg as the fleet completed the second-lap leg from Obelisk Bay to Rose Bay.

With just two more legs of the course to sail, tech2 increased her lead over Smeg from 25s at Rose Bay to 27s at the finish.

The appliancesonline.com.au team was impressive, and in the leading group throughout the entire race, to top the handicap scoreboard.

Race 2 of the championship will be sailed today on Sydney Harbour.

Spectators can follow the racing on board the club’s spectator ferry, however due to the COVID-19 policy, numbers are limited. Booking online through the club’s website is essential at: www.18footers.com.au/18-footers-sailing/spectator-ferry

For those unable to make it on the water, the Club’s live broadcast team will be on Sydney Harbour to capture all the action. For live streaming, click on the ‘18 Footers TV’ link at: www.18footers.com