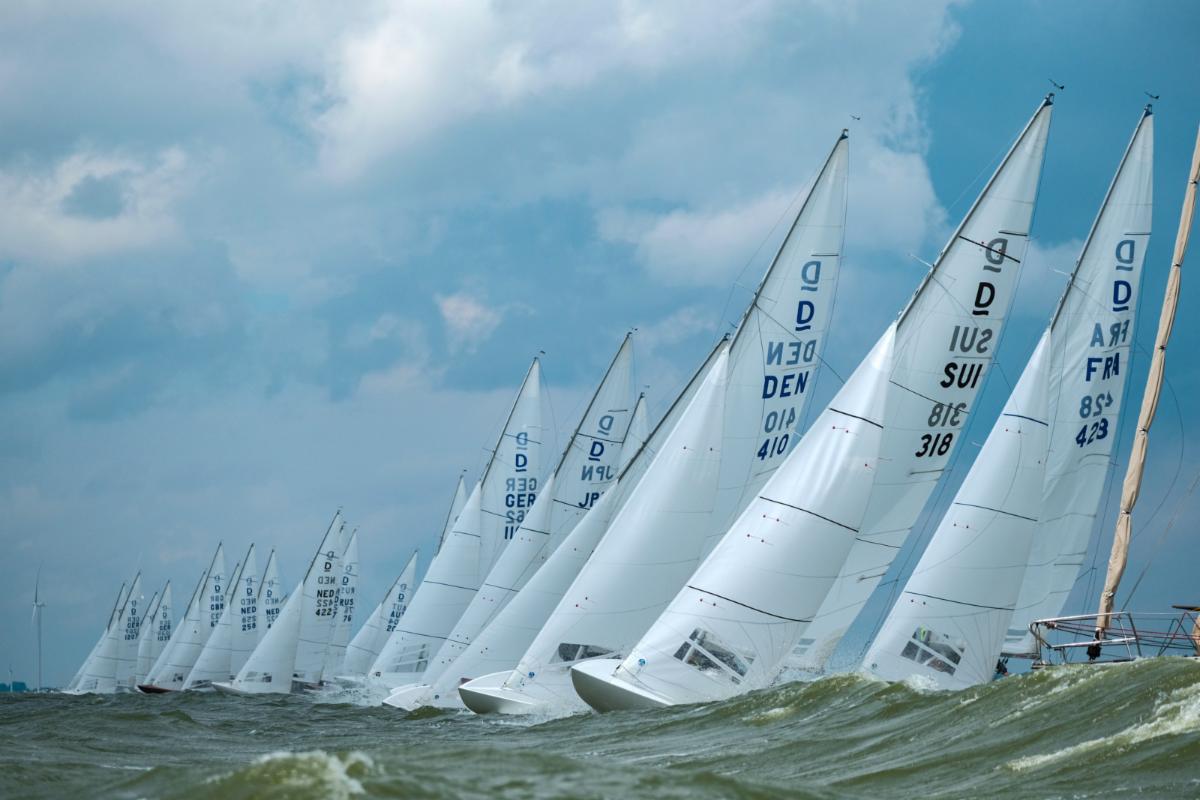 Competition is always fierce for the Dragon Gold Cup

Seventy-three teams from across Europe and as far afield as Japan and Australia have arrived in Marstrand, Sweden to compete for the International Dragon Gold Cup by Yanmar, to be raced from 15 to 20 August.

The 2020 Gold Cup had to be cancelled due to COVID-19, but thanks to a great deal of hard work, careful planning and close cooperation with the Swedish government and tourism authorities, the Marstrand’s Segelsällskap, Göteborgs Kungliga Segelsällskap and Swedish Dragon Association have been able to create a COVID-19 secure 2021 Gold Cup.

Their perseverance will allow this beautiful 92-year young class to shine on the international stage once again.

For the teams participating, the two-year hiatus between events has been frustrating. Many have been able to continue racing regionally, but most have missed the cut and thrust of major international competition.

Now the fleet is poised, and keen to snatch this famous trophy from the grasp of its current holder, Pedro Andrade of Portugal. But Pedro will be defending his title with determination and comes well prepared with a brand new boat to give him the best possible chance of seeing off the competition.

Challengers include reigning Dragon World Champion Andy Beadsworth and his Provezza Dragon team, Russia’s Anatoly Loginov who is looking to add his name to the trophy for a second time, and fellow Russian Dmitry Samokhin. The latter arrives fresh from victory at the Danish Dragon Grand Prix in Dragør and is ready to stand on the Gold Cup winner’s rostrum after several near misses.

Denmark’s Jörgen Schönherr has won the Gold Cup no less than four times, back-to-back in 2003, 2004 and 2005 and again in 2018, and remains a feared and hugely committed competitor. Holland’s Pieter Heerema was runner up at the 2018 and 2019 Gold Cups and would like to be the bride and not a bridesmaid this year.

Switzerland’s Hugo Stenbeck, sailing with Martin Westerdahl and Bernardo Freitas, has also made the lower slopes of the Gold Cup podium before, but will be aiming to make it to the top step this year.

Other well-known Dragon names to look out for at the top of the fleet include Denmark’s Jens Christensen crewed by World Sailing past president Kim Andersen, with Gold Cup winning crew Christian Videbaek. The German fleet is putting forward a very strong challenge including Dirk Pramann sailing with Marcus Koy, Nicola Friesen sailing with Vincent Hoesch and Michael Lipp and the always competitive Stephan Link.

Competing alongside the well-established Dragon teams will some new young stars from the dinghy and match racing worlds. From Australia comes 2017 World Match Racing champion Torvar Mirsky, who only joined the Dragon fleet earlier this season and is looking forward to his first Gold Cup.

Mirksy said, “I’ve sailed in Marstrand many times, but normally in the match race area which is close to the island. With the Dragon Gold Cup course needing to be super long, we are sailing way out.

“I realise now there’s quite a lot of current, the sea state is going to be very rough, and the prevailing winds are dictated by big fronts and pressure systems coming from outside, so it’s going to be very interesting, particularly [with the forecast] this week.”

Also from Australia is Sam Gilmour, who usually crews for his father Peter in the Yanmar-sponsored Y-Red Dragon. This time Peter has stayed at home and Sam will helm of Y-Red, crewed by his 49er sailing brother David, and the hugely experienced Yasuhiro Yaji. Peter and the Y-Red Team took bronze at the last Gold Cup, so the young guns have a bit to live up to.

The Corinthian all-amateur division will be hotly contested, with Sweden’s Martin Pålsson, and Germany’s Benjamin Morgen, amongst the most favoured. For Pålsson, Marstrand is home territory so will this give him the upper hand?

For Sunday’s first day of racing, the forecast is for the wind to drop a little, but remain quite strong, so the question for the race committee will be whether the sea state has moderated sufficiently to allow racing to proceed. If it has, the first race is scheduled to get underway at 13.00 and will be followed in the evening by a spectacular Opening Ceremony at the island’s famous Carlstens Fästning fort.

Championship racing will run from 15-20 August with a total of six races scheduled.

Alongside the Gold Cup itself, contenders will also be competing for the Nations Cup for the leading national team, the Corinthian Gold Cup Trophy which goes to the top performing all amateur crew, the Silver Cup, awarded to the helm finishing exactly halfway in the rankings, and the Borge Børresen Memorial Trophy for the winner of the first completed race.

Further details about the event can be found at http://www.goldcup21.com