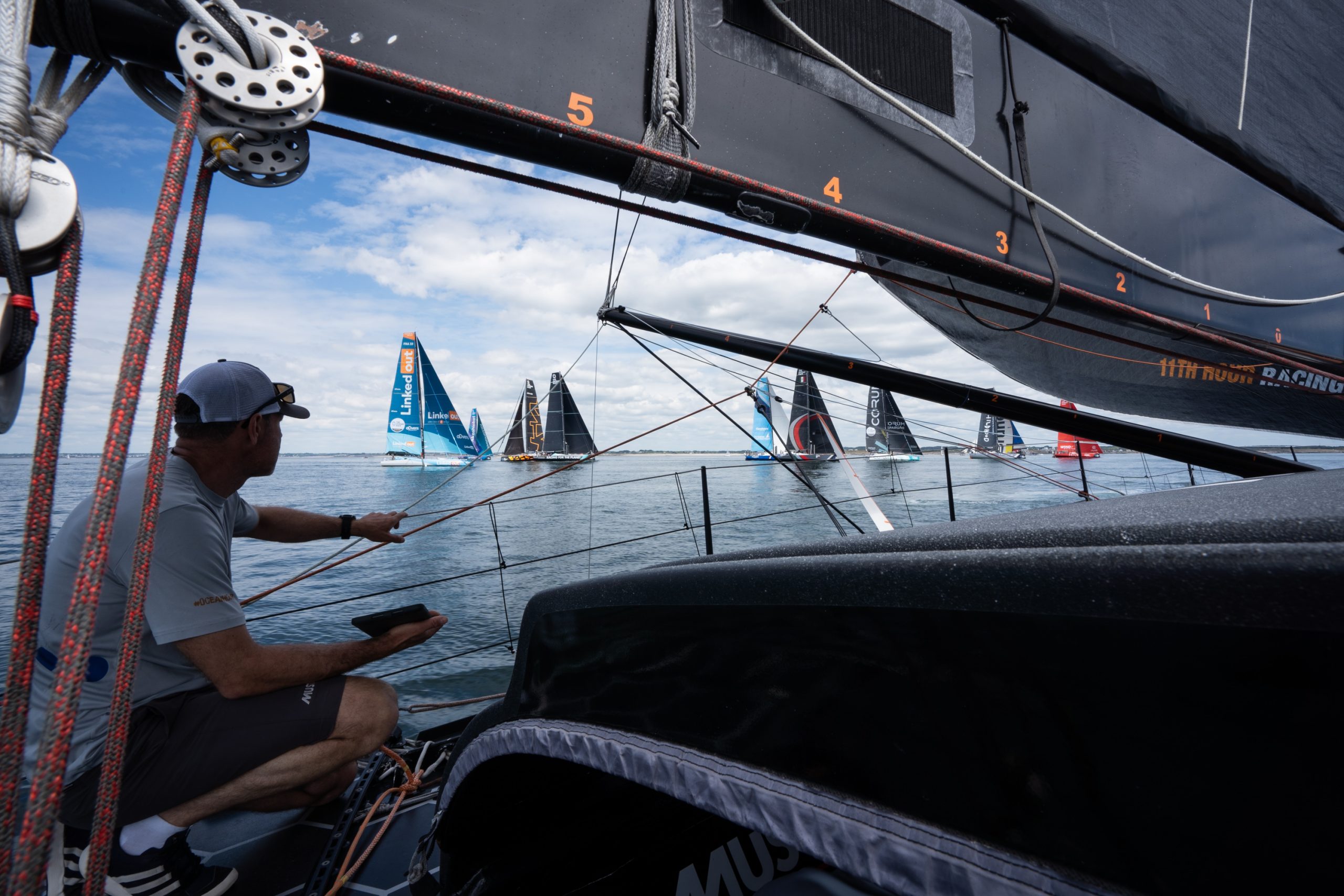 On the eve of the inaugural edition of The Ocean Race Europe the 12 competing teams from around the world are making their final preparations in Lorient, France before of the start tomorrow of the first leg to Cascais, Portugal.

Divided into two classes of high-performance ocean-going racing yachts – the identical one-design VO65s, and the IMOCA 60 box-rule development class – the fleet will race point-to-point first to Cascais, then on to Alicante, before finishing in Genova, Italy in mid-June.

Each offshore leg will be scored equally, but shorter coastal day races will be held in Cascais and Genova, when extra bonus points will be up for grabs for the top three finishers.

The powerful VO65 and foiling IMOCA 60 yachts are capable of 24-distance runs over 600 nautical miles in the right conditions out in the open ocean.

During the race, crews are likely to experience changeable conditions as they first negotiate Europe’s Atlantic coast, before entering the enclosed waters of the Mediterranean.

Ocean racing is a demanding sport and aside from their innate sailing ability, the sailors need to be on top of their game mentally and physically to be in with a chance of securing a place on the podium in Genova.

Racing non-stop around the clock, the crews typically divide themselves into two four-hour watches to ensure they are able coax the best out their boats at all times – day or night.

The entry list is packed with top names from the professional sailing scene – including many veterans of the around-the-world edition of The Ocean Race, which was first contested in 1973 and quickly became the pinnacle of professional ocean racing.

After an enforced hiatus to competitive sailing imposed by the Covid-19 global pandemic all the teams in Lorient are enthusiastic about the chance to go offshore racing once again.

Dutch veteran ocean racer Bouwe Bekking, skipper of the Sailing Poland VO65 entry said it was an impressive achievement to attract such a strong fleet for the inaugural edition of the European event.

“I think it is great that we are here with seven 65s,” Bekking said. “Especially for newer teams, this new race is a fantastic way to establish themselves and to give the crews a chance to sail, but also to show the sponsors what opportunities there are.

Having recently taken part a prologue event between Sailing Poland, Ambersail-2, Childhood 1 and The Austrian Ocean Race Project, that featured close racing, Bekking knows well that the race is likely to be fiercely contested.

“I think it will be competitive,” he said. “Some teams will be outstanding because they have been sailing longer, and then there are some teams that are on the learning curve. But I think that we have seen from the prologue that those teams can learn very quickly.

“It’s our aim to be on the podium in Genova.”

Likewise, AkzoNobel Ocean Racing’s Australian skipper, Chris Nicholson, says the Netherlands-flagged entry is aiming for a podium result in the event, despite having only sailed together as a crew for a few days.

“We want to be there with the leaders,” said Nicholson, who has hand-picked the AkzoNobel crew. “If you can be in the top three in all the legs then you are going to feature strongly overall.

“But for us it is going to be about pulling the team together quickly. We have only done three days together so far. We are improving rapidly, but we have a bit to catch up on the teams that have been sailing now for weeks and months together.

“But that’s a nice challenge and I know we have the people to do it.”

For Viva México’s Mexican skipper Erik Brockmann, the team’s arrival in Lorient for the start of the first leg is a moment to savour, given it marks Mexico’s return to the race for the first time since Ramon Carlin’s Sayula II won the first edition of the around-the-world race in 1973-4.

Brockmann and his crew delivered their VO65 some 7,000 miles from the team’s home port in Acapulco to be a part of the first European edition of The Ocean Race.

“I am just happy to finally enjoy being here,” Brockmann said. “We have worked hard with this team to get Mexico back into the race. It’s taken us 50 years to come back since the first edition. This time we will have three or four Mexican sailors doing the legs.

Despite having trained for the race in isolation from the rest of the VO65 fleet, Brockmann says the Mexican team are setting their sights on a top result.

“I think the race will be very competitive,” he said. “It will be tight, and I think we will see some close finishes. We have sailed a lot of miles with light winds, a lot of miles with heavy winds, and this first leg is looking like a combination of very light and very windy.

Being able to change gears and to set yourself in the right position for the wind and sail as fast as you can all the time is what wins these races. We are one of the crews who have put the most miles in, we have prepared the boat well, and so we come with our hopes high.”

For the IMOCA 60 class which is best known for singlehanded racing like the nonstop around the world Vendee Globe race, this race is the first opportunity to gauge the potential of the new fully crewed rule in the heat of battle.

According to 11th Hour Racing Team’s American skipper Charlie Enright, having such a diverse fleet adds another dimension to the racing.

“We have a really diverse fleet – that’s for sure,” Enright said. “All the boats are pretty different; we have multiple generations and it will be interesting to see how it all plays out and how all the boats stack up against each other. I think every dog will have its day.

“There’s not a lot known about the fully crewed environment in the IMOCA. I think we are all going to be learning as we go along. It’s pretty early in the season and not a lot of these boats have more than a couple of days on them since they have been launched.

“We will all be working things out as we go along, but hopefully we get some big conditions so that we can test what the crewed environment can bring to this IMOCA class.”

Tomorrow at 1345 local time, the VO65 and IMOCA 60 fleets will leave Lorient on the first leg, heading for Cascais, Portugal by way of a virtual waypoint turning mark out in the Atlantic Ocean.

Weather forecasts predict that the fleet will experience a range of conditions along the way, starting with a super light wind exit from Lorient in the Bay of Biscay, before stronger winds up to thirty knots become the order of the day at Spain’s Cape Finisterre and on the way out to the Atlantic turning mark.

As a warm-up on Friday, teams took part in a shortened practice race around the nearby Ile de Groix. In extremely light winds that could be a preview of the start conditions on Saturday, LinkedOut was the first IMOCA to finish, while the Austrian Ocean Race Project to the honours for the VO65 fleet.

The start of Leg 1 of The Ocean Race Europe is scheduled for 13.45 CEST and fans can follow the action live on Eurosport, or via the official website, http://www.theoceanrace.com from 13.30 CEST, as well as on the race’s social media platforms.